In that three-year interval there appeared three additional collaborative crime novels between the two men--two Patrick Quentins, The Follower (1950) and Black Widow (1952) and the final Q. Patrick, Danger Next Door (1952)--as well as solo novel by Wheeler, The Crippled Muse (1951), dedicated "to Rickie" (see this review by John Norris).

After Rickie Webb retired from the writing partnership and left his and Hugh Wheeler's home in the Massachusetts Berkshires for France (where Webb died in 1966), Wheeler stayed on and wrote some additional mysteries under the Patrick Quentin pseudonym, though he now is best known for his later written work for film and stage. (Among other things he wrote the Tony award winning books for A Little Night Music, Candide and Sweeney Todd--no small achievement!)

So in 1949 Webb and Wheeler were looking ahead to a time of transition, both professional and personal--something reflected, I think, in The Three Fears.

The series characters in the Stagge novels are New England country doctor and occasional amateur sleuth Dr. Hugh Westlake (note a certain resemblance in the name to Hugh Wheeler) and his precocious young daughter, Dawn. While the Stagge novels tend to have eerie trappings somewhat reminiscent of a John Dickson Carr novel (see this review of The Scarlet Circle), Dawn Westlake, who is something of a hellion I must say, brings humor to the series. Typically she manages, quite inadvertently, to help Dr. Westlake solve the bizarre murder problems that cross his path. 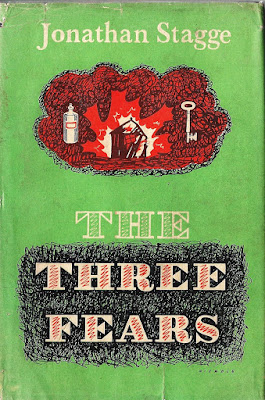 However, The Three Fears seems to me to provide evidence of the highly literary Wheeler's waxing influence over the Webb/Wheeler collaborations in this period.  Rather than Carr, say, the novel reminds me of the British Crime Queens and their celebrated "manners" style.  There is an interesting problem to test the reader's mettle, to be sure, but much of the appeal for readers of this novel stems, I think, from the emotional tempests depicted and that biting satire directed at Lucy Milliken and Daphne Winters (aka he Divine Daphne), two eminent stage prima donnas who are "rival queens," in the classic tense of the term. Lucy Milliken also has a cloying family radio program, allowing the authors to jab at mid-century American radio in a fashion that reminded me of Rex Stout's brilliant Nero Wolfe detective novel And Be a Villain.

Additionally Dawn never appears in the novel, having been packed off to camp. Hugh, perhaps relived by her absence, makes only two brief references to the boisterous child over the course of the tale.  He himself has a mild romance of sorts--none too convincingly--with one of Daphne's young aspiring actress disciples, known in aggregate as the "Five Sweet Symphonies."

Lucy Milliken is married to a hunky, younger husband (this reminded me of the marriage of the diva character in Black Widow), while Hugh's psychiatrist friend, Don Lockwood, has a beautiful, substantially younger wife, Tansy.  Age difference in couples and the problems which that can create seems a preoccupation of the novel. I couldn't help but wonder whether this might have reflected events in Hugh Wheeler's own life.

Rickie Webb was eleven years older than Wheeler and a prosperous business executive when in 1933 he became involved--intimately as well as professionally, it appears--with Wheeler, then a 21-year-old recent college graduate of exceptional promise.  By 1949, Wheeler, now 37 to Webb's 48, had become the dominant force in the two men's creative partnership and there may have been something of a personal estrangement between the two, though they remained friends after they parted ways.

In The Three Fears the Divine Daphne, who is "resting" with her entourage at the exclusive coastal New England town of Bittern's Bay, is subjected to a campaign of terror based on the three things which frighten her most: poison, enclosed spaces and fire. When one of Daphne's "Symphonies" dies from poisoning during a recording of Lucy's radio show (Lucy had inveigled Daphne into appearing), this appears to have been a misfired attempt on Daphnes's life. Will the culprit's next killing gambit succeed?

This is a subtle, cleverly clued detective novel with one of the authors' patented twisting denouements. You may think you have figured it out, but don't be too sure of yourself! Rickie and Hugh were quite the tricksy lads.