The Golden Age of British detective fiction--roughly 1920 to 1940 (though some have argued, with some reason, that the latter year should be stretched somewhat to 1945, or even to the early 1950s)-- was also the Golden Age of the classic thriller: exciting tales full of fiendish criminal masterminds, ruthless gangs, seductive adventuresses, conniving foreigners (the type fabulist Donald Trump conjures for his stump speech audiences), assorted dastardly cads and despicable hounds and, arrayed against these powerful forces of sheer nefariousness, those square-jawed, hard-fisted heroes and winsomely plucky "girls."

In the 1920s and 1930s British thriller writers such as Edgar Wallace, "Sapper" and Sax Rohmer actually sold more books than true detective fiction writers, including in softcover even before the paperback revolution of the 1940s.  These naive, escapist thrillers continued to be published well into the 1940s and 1950s and also enjoyed popularity overseas, in the United States and Germany, for example. (Adolf Hitler is said to have been a great Edgar Wallace fan, something later Wallace publishers likely were not anxious to point out.)  When Ian Fleming started the James Bond saga in the 1950s, his books were seen as sophisticated updates of the classic between-the-wars thrillers.

Many of these British thriller writers, despite their once great popularity and terrific productivity, are today remembered mostly, if at all, by genre specialists and collectors. Yet they were undoubtedly a hugely important part of the crime fiction genre in their day. Some of them wrote, in addition to thrillers, more generic "mystery" and even some true detective fiction as well.  (As Agatha Christie fans well know, the Queen of Crime returned the favor, publishing, alongside of her detective novels, a smaller number of thrillers, such as the Tommy and Tuppence tales.  Other Crime Queens who also wrote thrillers were Margery Allingham and Patricia Wentworth; much more on the latter author soon.) 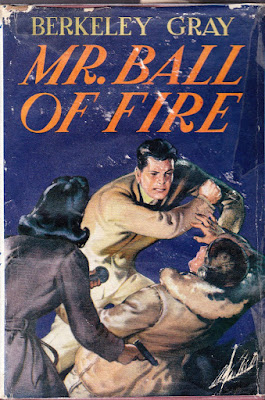 One of the more notable classic thriller writers who also wrote mystery and detective fiction was Edwy Searles Brooks (1889-1965), a close contemporary of one of my favorite Golden Age detective novelists, Cecil John Charles Street (1884-1964). Where Street wrote mostly true detective fiction, however, Gunn was more of the thriller school. Both men were incredibly prolific. Under his two best-known pseudonyms, Berkeley Grey and Victor Gunn, Brooks published nearly 100 novels.  Additionally he also published more then 2000 pieces of short fiction (including Sexton Blake tales), a staggering amount. Not surprisingly, some of the novels are expansions of earlier published short fiction. For more on this author, see this profusely detailed and authoritative website.

The Berkeley Gray novels are straight-up thrillers, while the Victor Gunns are more in the nature of "mystery," though many of them have strong thriller elements in them as well.

Though misleadingly packaged by publisher Collins as a seeming novel, the Victor Gunn book Three Dates with Death (1947) in fact is a novella collection.  All three stories--On the Road to Gallow's Cross, By the Side of the Grave and Within Sight of Eros--detail the investigative adventures of Gunn's series characters, the tough and steadfast Chief Inspector Bill "Ironsides" Cromwell and his young, rather more posh, assistant Johnny Lister (great name, that). 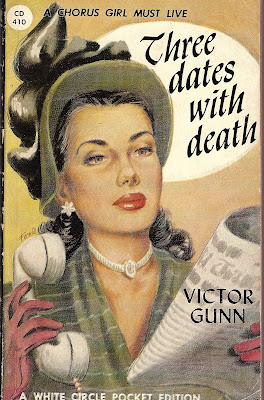 By far the best of this trio of tales, I think, is the first, On the Road to Gallow's Cross.  It opens with a late-night death on a bus making its final round of stops for the evening. "Old Iron" happens to come on the scene and almost immediately he is explaining to the examining police doctor not only that the dead man actually was murdered, but how he was bumped off.

Tough and smart this fellah!

The suspects are the six regular passengers on that leg of the bus's rounds.  (The chorus girl emblazoned on the cover is one of them.)  Gunn does a good job of bringing the bus and its passengers alive (at least while they are alive) and there is some true detection.

Inspector Cromwell decides that the murder must be hushed up for the time being (Old Iron has rather lax notions about legal niceties), so that he and his assistant can ride the bus in disguise the next night to see whether they can pick up any clues.  As they ride the bus another murder is committed, in identical fashion no less, leaving the chief inspector with one less suspect but something approaching egg on his face.

Happily he redeems himself the next night by catching the murderer on one final bus trip. A fun story with narrative zip, though it seemed odd that the murderer didn't realize that with each night's kill on the bus s/he was rather dangerously reducing the pool of suspects.

The next two stories I liked less.  In the second one, By the Side of the Grave, Cromwell must find the killer of a struggling member of the landed gentry (reverently treated by the author).  We know from the start that the murderer is a despicable London crime boss, which for me makes the story less intriguing, but again there is good pace and some social interest.  In crime genre fiction it certainly wasn't only Margery Allingham (in the celebrated The Tiger in the Smoke) who was writing about postwar moral decay in London!

The third tale, the misleadingly (not to mention irrelevantly) titled Within Sight of Eros, was a very far-fetched tale about a murder scheme involving dead cats and a dead cat burglar.  It is more a police tale than fair play detection.

So this one is rather a curate's egg, as they say, but it does leave me interested in looking at some of the Gunn novels, though unfortunately they can be quite hard to find!
Posted by The Passing Tramp at 9:22 PM