Asey Mayo, The Annulet of Gilt (1938), by Phoebe Atwood Taylor 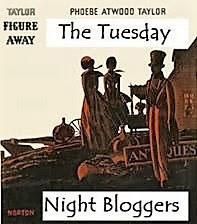 First, the links to our other Club member posts this week:

Accents and Cape Codders (Your Freedom and Ours, Helen Szamuely)

The Devil's in the Details (The Corpse Steps Out, Jeffrey Marks)

And now a consideration of The Annulet of Gilt:

By the time of the appearance of Phoebe Atwood Taylor's twelfth Asey Mayo detective novel, The Annulet of Gilt (1938), Mayo, the Sherlock of Cape Cod, was one of the best known American series detectives, popular in both the United States and the United Kingdom, where Taylor was published, like Agatha Christie, by the Collins Crime Club.

Fans of the Mayo books enjoyed the narrative zip and humor of the tales, as well as, yes, the "quaint" New England local color found in them.  Indeed, coastal New England has remained a popular American mystery setting up to the modern day, the most prominent example of this popularity, I presume, being the Angela Lansbury's hugely successful Murder She Wrote mystery series.

As I recollect, the cheeky Taylor claimed that she wrote her mysteries in about three weeks, getting them to her publisher just before deadline.  (You'll find greater details about Taylor, along with other American women mystery writers of the era, in Jeffrey Marks' book Atomic Renaissance.)

While this assertion may be an exaggeration, Taylor's enjoyable mysteries not only move quickly, they feel like they were, indeed, written quickly.  In them the emphasis is on motion and rapid fire events rather than the deliberate accumulation of clues (or "clews" as the word invariably--and to me a bit preciously--is spelled in Taylor's books).  After the explanation for the murders finally comes, you may still have some questions in your head about plot details, but you likely will have enjoyed your trip.

After Taylor in 1937 started her madcap "Leonidas Witherall" series (under the pen name Alice Tilton), the Asey Mayo series started getting zanier as well--sometimes a bit too much so for me.

Surprisingly, The Annulet of Gilt, despite being stuffed with an enigmatic foreign woman, a conniving businessman, a couple of beautiful blondes, a houseful of green-shirted, dagger-wielding bodyguards, assorted shootings and stranglings and, last but most definitely not least, a missing elephant, is not as chaotic as the immediately preceding Mayo mystery, Octagon House, which should tell you something about Octagon House.

Some reviewers at the time complained that the novel did not have enough local color, but I found Gilt a nice change of pace, with its references to world politics at that time. (One always finds interesting sociocultural aspects to Taylor's books.)

We learn that Asey Mayo, who despite his quasi-bumpkin routine became more and more of an all-round Superman as the series progressed, was involved in high-level intelligence in Europe during the First World War; and these events intriguingly resurface to play a role in the present day. Yet incongruously and rather charmingly the climax of this tale of international skullduggery takes place in the penultimate chapter at a sleepy village drugstore (there's little business because it's not "movie night"), as strawberry sodas and banana splits are consumed.

Something you don't see in an Agatha Christie mystery! Now that Sophie Hannah has taken over for the Queen of Crime, however, perhaps Hercule Poirot, a helpless marionette in a bid to make him more "accessible" to modern readers, will start slurping sodas and sundaes rather than delicately sip sirop de cassis.  I mean, how many people have even drunk sirop de cassis, or even know what the heck it is?  So elitist.

See also my earlier review of Banbury Bog, a Mayo mystery also from 1938.  Not quite so outre, but still quite local colorful.
Posted by The Passing Tramp at 9:30 PM