Just Some Gigolos? Profile of a Murder (1935), by Rufus King

Why, wondered Miss Marshall, were the nicest-looking and strongest men, the most physically attractive men, always found in those impossible positions in life where a marriage with them became almost insurmountably difficult?"

....Alfred's legs...were beautifully shaped, like a runner's, but just below the knew she did feel that they could do with a bit of toughening.  His scant bathing trunks were dazzlingly white against his brown skin, a tan that had been acquired with the slothful poise of a salamander during hours and hours of immobile lying in the sun, and his stunning arms moved just enough to keep the canoe in gentle motion across the lake's surface,

His throat looked like smooth brown velvet out of denim and she felt congealed and rigid with a frozen smile solidly stupid on her face.

"I do forty tricks, all with cards."
"And-coins?"
"I shall show you how I make them jump with my muscles."

My generation in the United States most likely associates the song "Just a Gigolo" with the much-mugged mashup version (with "I Ain't Got Nobody") by David Lee Roth, an Eighties MTV video fixture. Roth's raucous version of the song  itself was based on the upbeat version popularized by Louis Prima in 1956. (Perhaps inevitably, the Village People did a disco version too, rather dreadfully.) 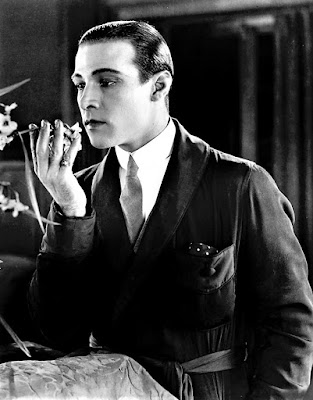 But the original American version of Just a Gigolo (1929) was based on the Austrian "Schoner Gigolo, armer Gigolo," a song composed in Vienna in 1928 as a melancholy reflection on the social collapse that occurred in Austria after the First World War.  The singer is meant to represent the viewpoint of a former Hussar recalling his once proudly parading in uniform in the martial past, in contrast with his sordid peacetime present as a hired dancer. Rupert Croft-Cooke (who wrote crime fiction as Leo Bruce) visited Vienna in the years after the war and wrote of how the city was rife with destitute male prostitutes, hungrily prowling for customers.

I think the image of the gigolo in between-the-wars detective fiction was decidedly, as least in the UK, that of the continental: if not an Austrian, an ersatz Russian prince perhaps, or maybe some silky and smooth-mannered Frenchman or Italian, the latter regrettably apt to be termed, by some stolid, outraged English male, "that damn dago." The image of American film heartthrob Rudolph Valentino comes to mind, an example of what a character in a Mignon Eberhart mystery from the period, notes Rick Cypert in his essay on Eberhart in Murder in the Closet, suspiciously termed men who were "a little too handsome."  But there were native English gigolos as well.

To readers of classic crime fiction Dorothy L. Sayers' Have His Carcase (1932) is a familiar depiction of what we might term the gigolo culture of the between-the-war years, but I doubt you will ever find a greater crowd of gigolos than those appearing in the works of Rufus King, one of the premier crime writers in the US during the Golden Age of detective fiction.  Or, if not gigolos per se, certainly all-American male gold diggers who with amiable avarice attach themselves to wealthy society women of a certain age. 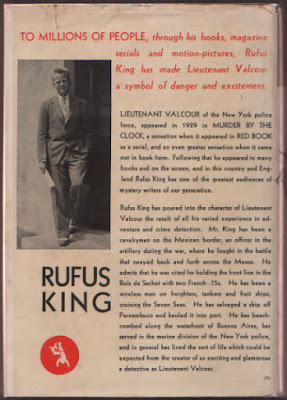 Perhaps the best example of this phenomenon is found in what is arguably King's best crime novel, Murder by Latitude, but it's also a notable feature of King's Profile of a Murder (1935), which despite its title is less a police procedural than an early example of what is now generally termed domestic suspense crime fiction.

In Profile King on page 109 dispenses with the formal whodunit aspect of the novel, informing readers outright who committed the murder.  King's series police sleuth, Lieutenant Valcour, had very shortly into the investigation deduced the identity of the killer, but he feels he does not have the proof to secure a conviction.

Convinced the murderer will strike again against a specific person, however, Valcour plays a nail-biting waiting game, in order to catch a killer in the act. So you can see how this book is essentially a suspense novel, making it perhaps a little disappointing to me, because all the ingredients for a classic GA detective novel are assuredly present.  But for what it is, it's done well.

Profile of a Murder, which might better have been titled Profile of a Murderer, tells the story of the strangulation slaying of the middle-aged heiress Beatrice Mundy in the master bedroom at her exquisite country home in the village of Peglertown, located on Alden Lake in upstate New York, and its aftermath. There is a quartet of suspects in the dastardly crime:

Alfred Mundy, her much younger, oh-so-handsome husband ("He had, from the age of sixteen on, continued to be a pretty perfect example of the physically attractive male")

Emily Haldane, Beatrice's pretty, on-the-make nurse ("She took excellent care of her body, neither ate too much nor drank liquor to any excess, and her not infrequent excursions into the carnal were directed with a scientific lack of nonsense that always resulted in some sound financial gain")

Segret Gambais, the aforementioned French Canadian gardener ("an agreeable youngster, certainly, of twenty-two, with the slopes of as young bullock")

One of these four people cruelly slew Beatrice, of that you should have no doubt.

Much of this novel seems clearly based on King's own life and personal sensibility, which I have detailed in previous blog posts here and in a "A Bad, Bad Past," an essay in Murder in the Closet. King had a very close relationship with his own wealthy and charming mother, who seems to have been the model for many of the stylish society matrons depicted in his fiction.  For much of his adult life, until he moved to Florida after his mother's death, King divided his time between an apartment in New York City and his ancestral home in a small town on Lake Champlain, close to the border with Canada. 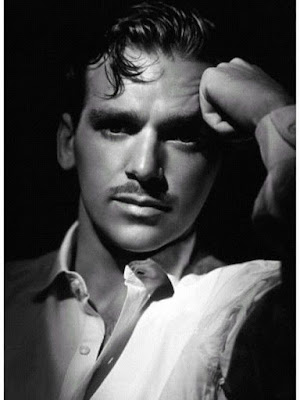 Readers also might sense the gay sensibility in the physical descriptions of Alfred and Segret (see above).  It seems clear that King drew upon his own sexual feelings when depicting those of his female characters, leading to an unusual forthrightness for the period on this subject.

It's a forthrightness that King shared, however, with some other gay male Golden Age crime writers of the period, particularly Richard Wilson Webb and Hugh Callingham Wheeler, a pair of sophisticated Americanized Englishmen who wrote as Patrick Quentin, Q. Patrick and Jonathan Stagge.

Like Webb and Wheeler, as well as a number of female mystery writers of the period, King was a pioneer not only of the domestic suspense novel popularized in the mid-century US (see Sarah Weinman's recent work), but the manners mystery associated with the British Crime Queens. King's work is filled with incisive social observation and a certain ironic detachment, often amusing and sometimes piercing.

Only once during [Alfred and Beatrice's] married life had he ever made up his mind about anything and that had been during their honeymoon on the way to Hawaii when he had wanted to view Los Angeles from a blimp.

Snow fell more thickly.  [Segret] thinks, [Beatrice] decided, that I'm crazy.  Then she wondered whether she wasn't, whether money and the ability to do things with it, wasn't just a sesame to the abnormal.  Certainly it must seem so in the eyes of the anchored poor.
The eyes of the anchored poor.  No, King's not Dashiell Hammett nor Raymond Chandler, but for his part he offers something more penetrating than critics of the social mores of classic crime fiction from the Golden Age often seem willing to allow.

Posted by The Passing Tramp at 7:04 PM