Praise from the Past: Pronzini on Blochman 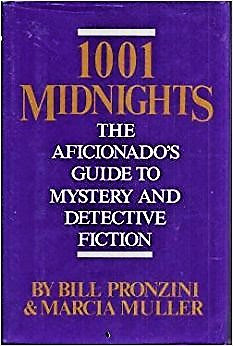 One of the things I enjoy about Steve Lewis' Mystery*File website, for which I used to write, is his reprinting of old pieces from the massive Bill Pronzini and Marcia Muller edited tome, 1001 Midnights, which gathers recommended reading entries (by Pronzini, Muller and others) for scores of crime writers.

In 1986, when it was first published, Midnights offered a valuable mine of information about worthy neglected crime writers.  In the pre-internet age Midnights was an absolutely essential volume and it is still very much worth seeking out today, when so many neglected authors are getting more attention.  Just make some room on your bookshelf--it's big!

Four years ago, when I published Clues and Corpses, about the life, crime fiction, and book reviews of the Native American Golden Age detective novelist Todd Downing, Bill kindly contributed a foreword to the book.  Bill, then something of a voice in the wilderness in this regard, had been there before, you see, as he so often has been, praising Downing in 1001 Midnights.

And, sure enough, here's Bill praising Lawrence Blochman in 1001 Midnights, as uploaded at Mystery*File:

Although most of his work is (regrettably) long out of print and he is little known among modern readers, Lawrence G. Blochman was a popular writer for more than four decades....Bombay Mail (1934) his first and probably most accomplished novel, is set on board an Indian train; features one of his many series characters, Inspector Leonidas Prike of the British CID; and is one of the best of that intriguing subgenre, the railway mystery.

I fully agree, as you will know from my previous (and rather more verbose) blog post.  But Bill goes on to opine that "Blochman's most notable creations" are his short stories about pathologist detective Dr. Daniel Webster Coffee.  Blochman won an Edgar for the title story of the first collection of Coffee tales, Diagnosis: Homicide (1950), and, notes Bill, Ellery Queen selected the book "as the 106th and final entry on his Queen's Quorum list of most important volumes of detective short stories." (You can buy Blochman's Edgar statuette for 6500 dollars.)

In the mood for some Coffee?  Coming this month and will still be warm I hope! Disappointingly, neither of the Coffee short story collections nor the three Inspector Prike novels seem to be in print, over thirty years after the publication of 1001 Midnights, though the sole Dr. Coffee detective novel is available on Amazon in the Kindle format.
Posted by The Passing Tramp at 2:51 PM