A Gathering of Gumshoes: Murder in Pastiche (1954), by Marion Mainwaring Part One

My late internet friend, Helen Szamuely, with whom I had political disagreements in the last year I'll admit, wrote what I found a fascinating piece for the essay collection Mysteries Unlocked, titled Parody, Pastiche and Presentism in Mystery Fiction, in which she distinguished parody from pastiche as follows: 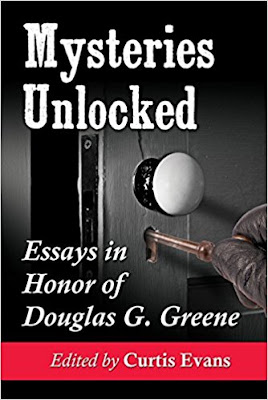 Detective fiction parody is a relatively straightforward affair.  As long as there is some memorable feature to the detective that can be exaggerated, there is potential for parody.  Leo Bruce's classic mystery novel Case for Three Detectives (1936) mirthfully parodies, as the title indicates, no less than three renowned Golden Age sleuths: Agatha Christie's Hercule Poirot, G. K. Chesterton's Father Brown and Dorothy L. Sayers' Lord Peter Wimsey.  Yet among M. Poirot, Father Brown and Lord Peter, only the latter character to date has figured in pastiche novels.  [This was written before the advent of Sophie Hannah and HarperCollins' Poirot venture--TPT].  Of these two literary forms, parody and pastiche, arguably it is pastiche that offers the more daunting prospect.

While the literary parodist exaggeratedly portrays the work of another author in order to make the author's characters look ridiculous, the writer of pastiche attempts literally to accomplish what is proverbially the sincerest form of flattery, imitation....There no doubt can be true creative genius in pastiche; yet...there is also a pitfall to the form, namely its stifling of originality....

In his introduction to the 1989 edition of Marion Mainwaring's Murder in Pastiche: Or, Nine Detectives All at Sea (1954), mystery scholar Robin W. Winks (1930-2003) writes that the novel "is, quite obviously and entertainingly, a parody."  I don't disagree that the novel is extremely entertaining, but is it parody, or pastiche, or both?

Helen's distinctions are valuable here, I believe. I go as the title suggests: Murder in Pastiche is pastiche, for the most part, and a remarkable case of it at that.  However, there are moments when parody intrudes, most mirthfully. 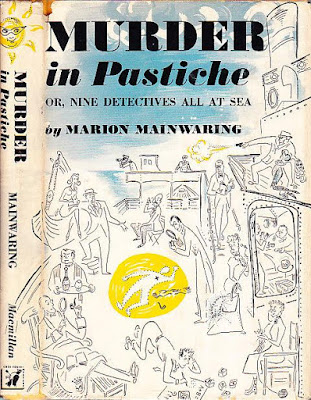 New York Times book reviewer Anthony Boucher, undeniably one of the top authorities on the crime novel in mid-century America, put it well in his notice of Murder in Pastiche:

...no multiple [mystery fiction] pastiche has ever succeeded in dissecting each of its subjects with such wickedly flawless accuracy.  That anyone can catch each flaw and each virtue of the prose styles of authors as disparate as Michael Innes and Earle Stanley Gardner all but passes my belief--or that anyone can think a plot in precisely the manner of, in turn, Mickey Spillane and Ellery Queen.  The fullest enjoyment of this wondrous book may be limited to those who know intimately the annals of all nine detectives; but if you know even so much as one of them, I think you'll agree that this is a permanent addition--both as criticism and entertainment--to the detective bookshelf.

Inevitably, as Boucher indicated, your enjoyment of Pastiche should be directly related to your familiarity with the detectives who are the subjects of the pastiches, but the mystery plot itself is clever (if, just as inevitably I think, bookish) and the writing and characterization lively and fun; so any classic mystery fan, however experienced, should give the book a try, in my opinion.  You should have a fun time aboard this lively (and deadly) murder cruise.

Yes, Murder in Pastiche is a mystery set on an ocean liner, RMS Florabunda, en route from Liverpool to New York. (Records show that Mainwaring herself traveled this route several times in the 1950s.)

I must say, incidentally, that I love cruise and train mysteries. Have I ever read a bad one? The only one I can recalling ever feeling meh about is Ngaio Marsh's Singing in the Shrouds, which, come to think of it, followed Mainwaring's novel by a only few years.  Indeed, I found it about as dull as Marsh's Seventies tour group mystery (another subgenre to itself), When in Rome.  But back to the review!

By some miraculous coincidence (?), there are no less than nine famous detectives on board the Florabunda: 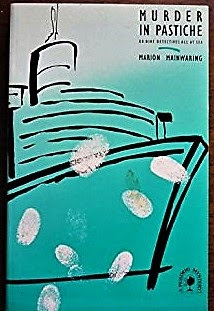 You likely can guess just whom all these people represent. (It's also a striking indicator of the times how few women Great Detectives are represented, though the Americans to British ratio among the sleuths is close indeed.) Who would be the nine 'tecs chosen today for a parody, I wonder?)

Pastiche is divided into three parts, the first part introducing the characters (with amusing introductory vignettes devoted to each detective) and ending swiftly with the murder of the most objectionable one. (Well, most objectionable after Spike Bludgeon, actually; more on him later.)  This dead 'un is the extremely influential and utterly noxious American scandal columnist Paul Price. (Walter Winchell?)

Potential suspects among the passengers and crew are numerous indeed and include, from the crew, the captain, who may or may not be insane; the ingenuously Watsonian first officer; the quite passionate purser and the ship doctor, a literature enthusiast who prefers devoting his time not to any patients but rather to the composition of his massive and passing awful classical epic poem, Tipptoppus and Gazella (Mainwaring includes hilarious extracts throughout the book).

The middle section of the novel is devoted to the investigations each detective makes into the murder,  with one chapter devoted to each sleuth.

Poireau was pained.  "But," he declared, "there is no such things as 'mystery,' mon cher.  There is only disorder!  To solve a crime, is only to use the logic: to restore misplaced details to their proper position."
...."And the details that will not fit? that are illogical?"
Poireau said severely: "In my cases there are no such things."


Atlas Poireau's section reveals that Mainwaring, who later in life controversially finished Edith Wharton's unfinished novel, The Buccaneers, would have been admirably well-suited to continuing Agatha Christie's Poirot saga, now in the hands of crime writer Sophie Hannah.  Not only does Mainwaring get the Belgian's mannerisms just right, she fashions the chapter in shipshape Christie fashion, with Poireau focusing on the pretty young girl in the case, Winifred Price, and her shipboard love interest, the passionate purser.

Sir Jon. Nappleby
Most recent Sir John Appleby mystery at the time
A Private View (1951)
"And how did you discover what he was up to?...Did you use logic, and simply put misplaced details into place in the proper system?"
"It was rather a matter of pursuing certain themes from Wordsworth and Gray."
...."It must be hard to be a detective until one has read a great deal of poetry?"
"It is difficult to solve a case without a thorough knowledge of the classics and of modern European literature."  Nappleby considered.  "Indeed, I suspect that crime and indagation are not only inherently arcane, fantastic, and polysyllabic, but quintessentially allusive."

This is a high point of the novel, with the academic Mainwaring perfectly capturing the academic Michael Innes' learned, if not to say pretentious, style in his Sir John Appleby detective novels. Obscure, polysyllabic words and copious literary references are frequently found.  Indeed, Mainwaring shows she is no slouch herself in the highfalutin' vocabulary department:

How many of those did you know?  It made me feel smarter just knowing they were in a book I was reading!

Mainwaring also brings in an espionage element (whether red or red herring I won't say), which dovetails with some of the Appleby fiction from the Forties and Fifties.

Jerry Pason
Most recent Perry Mason novel published at the time:
The Case of the Fugitive Nurse (Feb. 1954)
The Case of the Runaway Corpse (June 1954)
(Erle Stanley Gardner was nothing if not prolific!  He would publish an additional Mason novel that year, in October: The Case of the Restless Redhead.  He seems to have been into ambulatory titles that year.)

Jerry Pason said cheerfully: "Well, it won't be long now, Stella.  One more week, and we'll be back in the good old U.S.A."
Stella Deet, Pason's attractive secretary, nodded.  They stood looking into the fog from the promenade deck of the R.M.S. Florabunda.
"You certainly got a lot done in England, Chief," she said.  "No one but you could have handled that case so well!"
"I had to do it well," Pason said, "when they sent to Los Angeles for me all the way from Peckham, England!"

"I've found out a lot about my client.  Enough to clear him!"
"Did you use poetry to find out?"
"Poetry?  Hell," said the lawyer.  "None of my cases have anything to do with literature!"


Of all the sleuths Mainwaring parodies I am least familiar with Perry Mason, in book form anyway. But the pastiche here seems solid to me.  Pason immediately gets a client, wealthy Homer T. Anderson, and determinedly sets out to clear him, with worshipful Stella Deet in tow.  The clear and convincing contrast between the ornate writing style of Innes and the penny plain (but plenty profitable) style of Gardner is a tribute to Mainwaring's astonishing mastery and versatility in this form.

The tall man stood back to let the others go by, top-heavy in their inflated rubber vests.  He himself retained his customary air of aloofness, elegance, and breeding; his delicately chiselled head emerged from the life-jacket like the head of a Velasquez nobleman from a ruff.

"....I love an English accent.  You're what they call a bobby, aren't you?"
Mr. Waggish was scandalized.  "Mr. Tourneur is a gentleman," he said, with an apologetic glance at Tourneur's superlative tailoring.  "Everyone knows that!  Why, he went to Oxf--"
Tourneur lifted a thin hand in deprecation....

Is that the most important qualification for being a detective, would you say, Mr. Tourneur?
Tourneur reflected.  "That, and breeding.  One always has to ask oneself, 'How does a gentleman behave in this particular situation?'  Or--better still--'How would a lady consider that a gentleman ought to behave in this particular situation?"  And no handbooks, no rules, no police colleges can teach such things, he thought.


For the surname of this detective Mainwaring presumably drew on Cyril Tourneur (not Jacques Tourneur!), a Jacobean English dramatist, thought by some to have been the author of The Revenger's Tragedy (1607).  for her part author Ngaio Marsh took "Alleyn" from Edward Alleyn, the prominent Elizabethan actor.

Mainwaring's portrayal of the painfully posh and precious Broderick Tourneur is another high point of this mountain range of a novel.  Some might see this portrayal as parody, but I think it's a perfectly pitched pastiche of Ngaio Marsh's crime writing, in my view easily the most affected of the English Crime Queens.  Marsh's Alleyn really is like this.

There are five more detectives left to look at, plus the conclusion of this very clever novel.  I'll be back soon!
Posted by The Passing Tramp at 9:38 PM