My introduction to James Yaffe (1927-2017), who passed away on June 7 at the age of 90, occurred twenty years ago when I bought a copy of Yaffe's short story collection, My Mother the Detective, published by Doug Greene's fine short mystery fiction imprint Crippen & Landru (now run by Jeffrey Marks, with input from Doug).  After John Dickson Carr's rediscovered radio play Speak of the Devil, the first Crippen & Landru books I bought were Yaffe's and the premier collection of Ed Hoch's Dr. Sam Hawthorne mysteries.  I loved both books and even ordered another copy of the Yaffe, this time in hardcover. (Here's a link to my review of the second C&L book in the Hawthorne series).

The hardcover edition of My Mother, the Detective includes a tipped-in edition of an early "impossible crime" story by Yaffe, "The Problem of the Emperor's Mushrooms." Yaffe was something of a mystery writing prodigy, publishing in Ellery Queen's Mystery Magazine between July 1943 and February 1946 (before he was even twenty years old), a half-dozen tales about the criminal investigations of policeman Paul Dawn, of the NYPD's rather fanciful "Department of Impossible Crimes."

These stories are, as Jon L. Breen explains in "Experimenters, Pioneers, Prodigies and Passers-By: Ten Detective Story Writers in Search of a Collection," an essay he wrote for Mysteries Unlocked (2014), a collection of essays published in honor of Doug Greene, "The Department of Impossible Crimes," "Mr. Kiroshibu's Ashes," "The Seventh Drink," "Cul de Sac," "The Problem of the Emperor's Mushrooms," and "The Comic Opera Murders."

"Mushrooms," which Jon Breen links with "The Comic Opera Murders" as the best of the Paul Dawn tales, is the only one that has actually been anthologized, I believe. (See the locked room mysteries website.)  I would love to see all of them published together, as would, obviously, Jon Breen.

Impossible crime mysteries seem to have been, if not the first mystery love of many of us fans, at least the sexy second, after the Sherlock Holmes tales of Arthur Conan Doyle.  This was the case with Yaffe, as the late author explains in his fascinating introduction to My Mother, the Detective; but it was not so with me, for my first mystery love, who smote me when I was all of eight, was Agatha Christie (followed by Sherlock Holmes).

I did not get around to John Dickson Carr, the undisputed master of miraculous murders, until 1989, when I was 23, but then I fell hard, trying to read everything by him I could find well into the 1990s. For me Carr will always represent a sort of last fling on my part with the romance of mystery fiction.  In the late 1990s I discovered the more stolid pleasures of the prosaic, though often quite ingenious, "Humdrum" mystery fiction of such authors as Cecil John Charles Street, and a little of the romance went out of it as I savored the drier delights of purely ratiocinative detective fiction.*

*(Street and Carr were, incidentally, great friends and in their own ways they both possessed a great deal of ingenuity, Carr in the creation of locked rooms and Street in the devising of fiendish murder means.  Carr was a far livelier writer, however--too much so, indeed, for mystery critic and aesthetic theorist Jacques Barzun, a great Street partisan.)

In his introduction Mother, James Yaffe explains that what initially attracted him in detective fiction was the puzzle, and that constructing ingenious puzzles was his aim in the stories of Paul Dawn and his Department of Impossible Crimes (which, though Yaffe doesn't say so, I assume was modeled after Carr's less ingenuously titled "Department of Queer Complaints.")  Writes Yaffe:

The absurdity of this concept is a dead giveaway to what was really happening.  The detective story to me, in that stage of my life, was the puzzle and nothing but the puzzle.  The excitement of unraveling the puzzle, which had been aroused in me by so many writers during my childhood, was pretty much all I was trying to reproduce in my own work.  It was a game and I was having a lot of fun with it.

....Sometimes I think I reached my peak of sheer cleverness at the age of seventeen in the last couple of Paul Dawn stories; it's been downhill ever since.

But the one thing those early stories never had was any connection with reality....It simply never occurred to me to base any of my characters on people I had known or observed, to draw on experiences I had actually had, to set the stories in a social world I had lived in.  Detective stories obviously had no connection with reality; that was part of what made them fun.

Some of us consciously rejected mystery fiction when we turned to "serious" fiction in college, having matured, as we loftily imagined it, too much for the "juvenile" stuff.  Yaffe did this, as he explains in his introduction, as did Edgar award-winning critic and author Michael Dirda (as he explains in his essay in Mysteries Unlocked), as did I myself, I must admit.

Even though I've been working for the New York Homicide Squad almost five years, I still give a little shudder at the thought that someday somebody might discover my secret--specifically, that most of my successful cases were really solved by my mother. 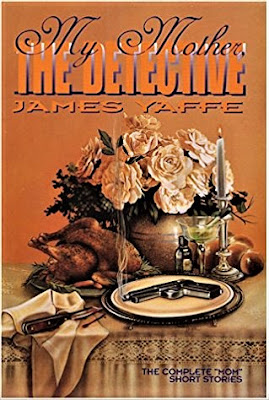 I have to admit I haven't read the Mom novels, but the Mom short stories (there's an additional one included in a new edition of the collection, now available from Crippen & Landru), are excellent examples of armchair detection, on the order of Baroness Orczy's Man in the Corner tales and Christie's classic Miss Marple short story collection, The Thirteen Problems.  Mom even shares Miss Marple's penchant for drawing "parallels" between any given murder milieu and her own more limited, bourgeois social experience.

By this time Yaffe was leavening his mystery stories with manners comedy and wry psychological insight, but in them he never neglected the fair play murder problem.

To be sure, the early stories are more purely problem-focused. (And you couldn't ask for better examples of these sorts of problem stories than, for example, "Mom Knows Best" and "Mom Makes a Bet").  By the end of the Mom saga, however, Yaffe is including much more social observation in his stories. ("Mom Remembers," from 1968, is 41 pages long, compared with 14 for 1952's "Mom Knows Best," and the additional detail found on those pages is not, shall we say, forensic in nature.) Yet all the tales are delightful and make most engaging reading for the fan of classic mystery.

However, the Yaffe story, as concerns crime fiction, doesn't quite end with Mom.  There's more to his fine body of criminous work, as I will detail in an upcoming post.
Posted by The Passing Tramp at 11:55 AM