Kindertotenlieder: A Question of Inheritance (1980) and Easy Prey (1959), by Josephine Bell

"Excuse me, was it your poor child?"

--Mrs. Lancaster to Tuppence Beresford, By the Pricking of My Thumbs (1968), by Agatha Christie 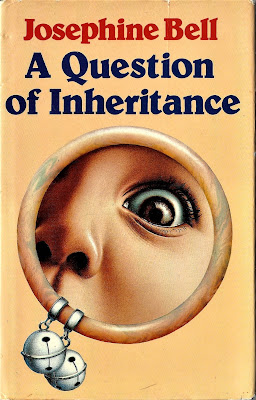 Published when the author was 83, the detective novel A Question of Inheritance(1980) is Josephine Bell's penultimate novel and the second of her two engaging Amy Tupper mysteries.  A "resting" actress, long retired from the stage, Amy Tupper is, I think, the most appealing of Josephine Bell's amateur detectives. (The roster of sometime sleuths includes, but is not limited to, heavy hitter David Wintringham, who appears in a dozen books; attorney Claude Warrington-Reeve, who appears in three; and Dr. Henry Frost, who, like Amy Tupper, cracked a couple of cases in novel form. There's also, I should add, Bell's Inspector Mitchell, who appeared in nine of the Wintringham books and all of the Warrington-Reeve books, as well as in at least one solo venture.)

With the temporal shift that takes place in the novel, one could see how the plot, in the hands of Ruth Rendell, might have been expanded into a Barbara Vine opus of 120, 000 words, but Josephine Bell was a less ambitious (or if you like, more economical) writer than the Rendell who gave us the rich and rewarding A Dark Adapted Eye, A Fatal Inversion, The House of Stairs, The Brimstone Wedding and Asta's Book.

Still, Part One of A Question of Inheritance is rather Rendellian, being a suspenseful and indeed somewhat Gothic depiction of a wife, Florence Bennet (the former minor stage actress "Maisie Atkins"), who is trapped in a loveless marriage at the remote country mansion of Garwood House (Florence's husband, we learn, only married her to beget an heir to his estate). 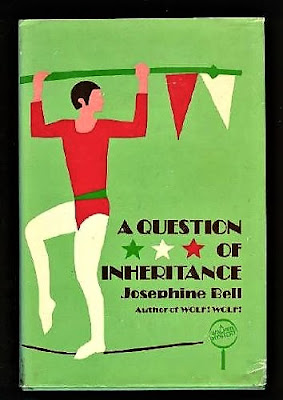 After her infant son, the begotten heir, abruptly dies, a casualty of cot death (SIDS, or sudden infant death syndrome), on a night when Florence is totally alone in the house, the panicking wife decides to flee her husband and the country, covering both her tracks and the traces of her son's death.

Florence ends up in Italy, where she meets a distraught native woman with an infant son who just happens to be the age of her dead child....

Bell has Florence herself thinking how her situation is like something out of a Victorian stage melodrama: "Could it have been a dramatic version of the famous East Lynne?  Quite likely.  It always went down famously in the provinces."  It's also like something you might find in an Annie Haynes novel.

Part Two takes Florence Bennet forward to 1975, where the events of the past embroil her and those around her in a very modern murder case.  Amy Tupper, an old friend of Florence (or Maisie as she was then) from acting days, is on hand to help out, happily, and it's she who grasps the meaning of a clever clue (one daringly staring readers in the face throughout the book, even though I didn't quite grasp it).

The plot involving a dead infant reminds me of the Rendell novel A Fatal Inversion (1987), except that as I recollect Rendell's characters in that book are Sixties hippy types and sexual swingers and Bell's young couple is ever so nice and spruce and "sensible" (as Bell puts it), making them rather akin to the nice young couples in Ngaio Marsh's mysteries.  (They even know their way around a sherry bottle.)

I'm reminded also of that haunting vignette, which actually pops up in several Agatha Christie novels, of the mad old woman in the nursing home asking, "Was it your poor child?"  But Bell's book is more a classic mystery, complete with house servants and a battle over the inheritance of an ancestral country estate. This is a good late Bell (though with some implausible bits, as Moira Redmond has noted), and more of a traditional mystery than most of her other late novels.  In fact it was Bell's farewell to classic detective fiction.

Note: Moira Redmond's 2013 review of this novel makes, as expected, quite an entertaining read.  Check it out. 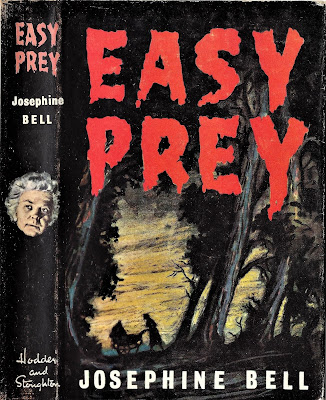 Easy Prey was published during Josephine Bell's heyday back in the 1950s, a year after the final appearance of her longtime series sleuth, David Wintringham.

Here we have an abundance, or indeed an overabundance, of sleuths, including a young husband and wife, the wife's mother, the canny lawyer Claude Warrington-Reeve, and several impressively able policeman, including Superintendent, formerly Inspector, Mitchell and Inspector Frost.*

The complicated case concerns another dead child, this one appallingly murdered in his crib, allegedly by his own mother, sixteen years earlier.

In the opening chapter of the novel, Reg and Mavis Holmes, a nice young married couple with a nice infant daughter, Joy, come home in their nice London neighborhood to find their nice middle-aged lodger (I think she is forty--"a dangerous age for women," we are told) nearly dead from gas poisoning, in an attempted suicide.

Or is it attempted murder???  To their horror, Reg and Mavis learn that their wonderful lodger, Miss Trubb, served sixteen years in prison for the murder of her young son.  But they begin to suspect that all is not as it seems, and they start snooping into the past, with some deadly results....

Easy Prey is an interesting and complexly plotted detective novel, with an especially good character portrayal of pathos in Miss Trubb, the sort of complex personality type who shows up in more modern crime novels like Minette Walter's The Sculptress (1993).

My only complaints about the novel are the somewhat huddled and muddled conclusion, something that happens sometimes with Josephine Bell mysteries (like Sophie Hannah, Bell is not blessed with the miraculous clarity of Christie), and the somewhat irritating way the wife, Mavis Holmes, is portrayed.

It's all very Fiction from the Fifties in the portrayal of fictive marriage, with Mavis occasionally flipping out over stressful events ("She was on the verge of hysteria," he decided), afterward sitting like a child on her husband's knee to be calmed ("Reg took his wife on his knee") and having her mother brought in to help her cope when her husband is absent. ("I'm a lucky old woman, and you are a lucky young one, having a man like Reg to look after you.")  There's no suggestion that any of this is odd or unusual, it's just a typical Fifties husband-wife relationship apparently.

Needless to say, Reg takes the lead in the amateur investigation, masterful Fifties fellow that he is. It's hard to imagine that Josephine Bell, a doctor who supported four children entirely herself after the tragic accidental death of her husband when he was not even forty years old, all the while managing to write at least one novel a year, would have been so passive.
Posted by The Passing Tramp at 4:41 PM