"Strange things seem to happen in these country places": A Village Afraid (1950), by Miles Burton

In their mammoth, epochal encyclopedia, A Catalogue of Crime (1971), authors Jacques Barzun (1907-2012) and Wendell Hertig Taylor (1905-1985) devote sixteen pages to John Street, nine to his John Rhode mysteries and seven to his Miles Burtons.  Let me emphasize that largely these pages are filled with high praise--often very, very high praise--for Street's mysteries; yet there are a small number of exceptions to this rule.

"The dullest conceivable Rhode," they write of The Fatal Pool.  "Well-nigh unreadable."  (That's true enough, I'm afraid.)  They find The Vanishing Diary "dull in the extreme."  (I didn't think that one was that bad.) "Dull throughout," they find Tragedy at the Thirteenth Hole (Fraid so!).  "One of his very worst," the thunder at A Village Afraid.  "[Burton's sleuths] Arnold and Merrion dither together."

Now to that aspersion I have to say, Whoa, now, Nellie!

A Village Afraid is actually not bad.  In fact it's rather good.

Like Ground for Suspicion, the previous book from that year, it has a solid mystery with a well-grounded provincial setting, a small village rather than a town, like in Ground.  It similarly fashions a large cast of characters and  entangles them in multiple layers of mystery and deception for gentleman sleuth Desmond Merrion and Scotland Yard's Inspector Arnold to uncover.

I can see how one might be put off by the first chapter, which introduces a plenitude of characters.

It all begins at a gathering of five men in the village of Michelgreen, at the public bar of The Swan.  These men are:

Mark Hamsey, a handsome bachelor doctor nearing his forties who resides at Weaver's House, "one of the old houses in the centre of the village"

Gideon Carter, a successful farmer in his forties who resides with his "considerably younger" wife, Jessie, at Little Bishop's, "an isolated farmhouse on the bank of the river [Locker], close to the ruined wharf which once had been Bishop's Quay"

Norman Rother, around fifty, "an active partner in a firm of wholesalers in London, attending his office there five days a week."  When in Michelgreen he resides with his second, recent wife, Annette, who is "little more than a girl," at Poppin Cottage.  It's "rather an elaborate cottage...fitted with every imaginable convenience, including no less than three bathrooms."  Gracious!

Colonel Barham, white-mustached and reserved and "considerably older" than the other men, who led the local Home Guard in the recent hostilities and resides at the bungalow Karachi with his wife, "a nervous woman" who hardly gets about anymore, on account of her prostration over the death of her only son in the war.

Captain Joshua Brisling, Michelgreen's beer-loving, venerable patriarch, a "retired master mariner in the Merchant Service" whose "appearance suggested that he must have retired with the passing of the sailing ship."  He resides with his sister Dorcas at Mainbrace, "a Victorian horror just outside the village."

On their way back to their respective homes, they pass The Lodge, "a sordid little place, covered with discoloured stucco," where a nice young couple just starting out in life, Don and Peggy Playden, are tenants, and Hamsey and Rother stop in for quick drinks.  Hamsey also wants to make a "semi-professional call" on Peggy, who has been looking peaked lately.

Don is a research chemist for an local firm, charmingly named Pest Destruction, Ltd.  To help make ends meet, Peggy has just taken on a "paying guest," a bucktoothed, birdwatching minister by the name of Sherwood.

For a time we follow Gideon Carter on his way home, as he passes the slummish parcel by Bishop's Lane and the the dilapidated house and grounds known as Palace Park, which derives its name from the fact that centuries ago it had been a Bishop's Palace.  The Playdens' house The Lodge derives its own name from the fact that it stands on the site of the original gate lodge to Palace Park.  Also located in this section of Michelgreen is a caravan site, where recently an outlandish-looking party named Mrs. Harris, with blue hair and sporting dark sunglasses, has taken up residence.  (I'd quote Mrs. 'Arris Goes to Paris, except she isn't Cockney, not is she a charwoman.)  Here's one for the Clothes in Books blog:

Her attire was equally startling, for she was wearing beach pyjamas, over which hung ropes of obviously imitation pearls.  Her feet were encased in a pair of vivid scarlet sandals.

I don't know that having real pearls would have improved the situation in the eyes of Gideon Carter (the character who has espied her) or see how from that distance he even could have told they were artificial ones, but there it is.

At Palace Park reside Elma Kingley and her husband Harold, Annette Rother's stepfather.  Harold, who was living with Elma and Annette out in Cuba (where, a few years earlier, he and Elma--or really just Elma--ran a guest house), inherited Palace Park from a late relation, but evidently he and Elma don't have the money to maintain it properly.

I've just listed a dozen characters, and in the book their names are all thrown at the reader in rapid succession in the first chapter, which perhaps helps explain Barzun and Taylor's impatience with it.  But happily you have me to help you out, so make sure to print this blog piece for easy reference if this very rare book is reprinted and you get yourselves a copies!

Anyway, on the very next day, Norman Rother, who had been staying up late drinking alone in the dining room, fortifying himself into a state of "hospitable squiffiness," is found dead there.  And, yes, his death is not  a natural one!  Suspicion focuses on the new young wife, Annette, who was unhappy in her marriage and will, presumably, inherit a packet from her dead spouse, but is there more to it than that?

Of course there is!  But who besides Annette might have had motive to rid the village of Rother?

Young village policeman Sergeant Gerrard will need help with this one, of course, so Scotland Yard is called in, in the form of Inspector Arnold, who is given a lift out to Michelgreen by his gentleman amateur sleuth friend of long standing, Desmond Merrion.

Concerning Sergeant Gerrard, Arnold and Merrion have an interesting exchange which represents the distaste of many in the middle class (and a great many in the upper class) with the Labour government.  The Conservative Party, ousted in 1945, would return to the power after the General Election of 1951, leading to a general sigh of relief from most British mystery writers of that time, from what I can tell.

Here's the exchange between Merrion and Arnold in A Village Afraid: 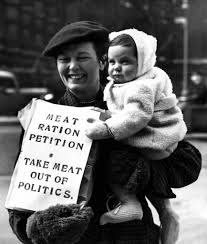 "Motive seems, as you say, to be the thing.  What does you friend the sergeant say?"

"Absolutely nothing," Arnold replied.  "But then, you can hardly expect him to.  A village policeman makes it his business to find out all about the doubtful characters in his parish.  But he does not trouble himself about the intimate affairs of the law-abiding members of the community.  We haven't adopted Gestapo methods in this country yet."

"Haven't we?" Merrion asked scoffingly.  "What about food-enforcement officers, and gentry of their kidney?  As to the law-abiding members of the community, there simply aren't any these days.  It's rather a terrifying thought that you could scour this country without finding anyone who hadn't broken the law in some way.  Even if was only by throwing crumbs to the birds when bread was rationed."

The shall make criminals of us all!  The fact that rationing of gas, sugar and meat was still going on five years after the end of the war is something which comes up over and over in British mysteries from the period and I never see it portrayed in any light but a scathing one.

The 1951 Tory restoration (complete with ailing, seventy-eight-year-old Winston Churchill) often seems to be portrayed as a massive repudiation of Labour, whom from reading mid-century vintage mysteries you would gather everyone despised; yet in fact Labour received about 49% of the vote to the Tories 48%.  However, in 1945 Labour had received 48% of the vote to the Conservative's dismal 36% (plus the Conservative-aligned Liberal National Party got 3%), so this was indeed a significant comeback for the Conservatives.

In terms of it setting and general tone (and a few of its plot devices), A Village Afraid is rather reminiscent of Agatha Christie's A Murder Is Announced (also published in 1950), the difference being that Christie's book is one of her highest achievements within the genre (the unpleasantly caricatured character of Middle European refuge Mitzi excepted), a true landmark of classic English mystery.

A Village Afraid doesn't measure up to that high standard, but it is much better than Barzun and Taylor would have us believe.  It's nicely plotted, with a number of interesting plot strands and a capably managed central mystery.  (Indeed poison is quite cleverly employed here; one area in which Street rivalled Christie was in poisoning people.)  Moreover the village milieu is quite nicely conveyed.  To be sure Burton's characters are not as colorful as Christie's, but the overall crime "package," as it were, should definitely appeal to lovers of classic English mystery.

Although he provides Arnold's transportation, Merrion sits out the case at an inn in a nearby town, its apparently having struck the author that people were not necessarily going to buy into an amateur sleuthing swell openly participating in the case as an equal with an official Scotland Yard investigator, like in the good old days.

Instead Merrion shoots the breeze with Arnold and drives him out to the village and back.  His own "investigation" consists of sitting in the village pub listening to gossip from old, bear-guzzling Joshua Brisling.  In the Fifties the author would get more and more dependent on long expository passages in his books, which can make tedious (not to mention implausible) reading, yet here is is not badly done, Joshua being presented as an elderly gentleman who just loves to gab in his cups and is always on the lookout for a new aural victim.  Every amateur sleuth should be so lucky to have a Joshua at hand!

Personally I rather enjoyed this one on rereading, but then I do like a good village mystery and Street absolutely knew his villages.  I wish I had reread this one when I was finishing my book Masters of the "Humdrum" Mystery, because, there are some very interesting bits bearing on recent developments in the author's life, but I can't say more here (spoilers).  Let's just hope this one can be reprinted, so people can read it for themselves.  There is no good reason for this title to have fallen out-of-print for seven decades.  Don't let's make it eight.

Posted by The Passing Tramp at 2:02 PM