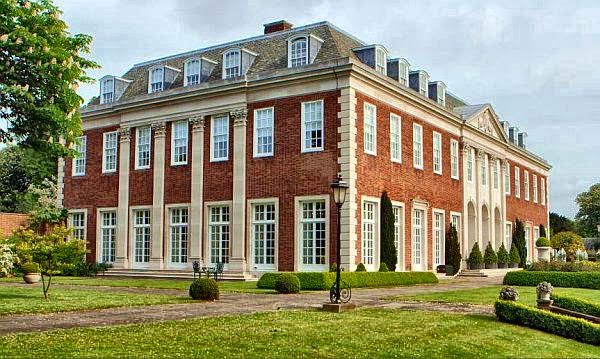 One of the things I enjoy about Ruth Rendell's Inspector Wexford novels, which now cover a half-century of English history, from 1964 to 2013, is the depiction of social change.

In Rendell's Simisola (1994), the novel's ambitious grocery store chain millionaire couple, Wael and Anouk Khoori, bought a Kingsmarkham country estate, Mynford Old Hall, which they promptly demolished and replaced with another structure, because the older house had the misfortune of being a nineteenth-century Victorian mansion. Wrong style--as any reader of Golden age detective fiction will know!

Mynford New Hall is what Rendell calls a "mock-Georgian" mansion, done in the best Jane Austen taste. But it's just not the true article, outside or inside.

During the course of their murder investigation in Simisola, Wexford and Mike Burden call on the house and interview the Khoori's two Filipina servants, Juana and Rosenda:

There seemed no need to penetrate farther into the house.  The hall was a vast chamber, pillared, arched, alcoved, the walls paneled and with recessed columns, very much the kind of room guests must have been welcomed into at a Pemberley or a Northanger Abbey.  Only this was new, all new, barely furnished.  And even in the early nineteenth century, even in winter, no great house would have been as cold inside as this one.

It is interesting to see how the classical country house still serves as such a potent symbol in the English mystery novel, so many years after the end of the Golden Age of detective fiction, a literary period with which the country house has been so strongly associated.
Posted by The Passing Tramp at 12:03 PM