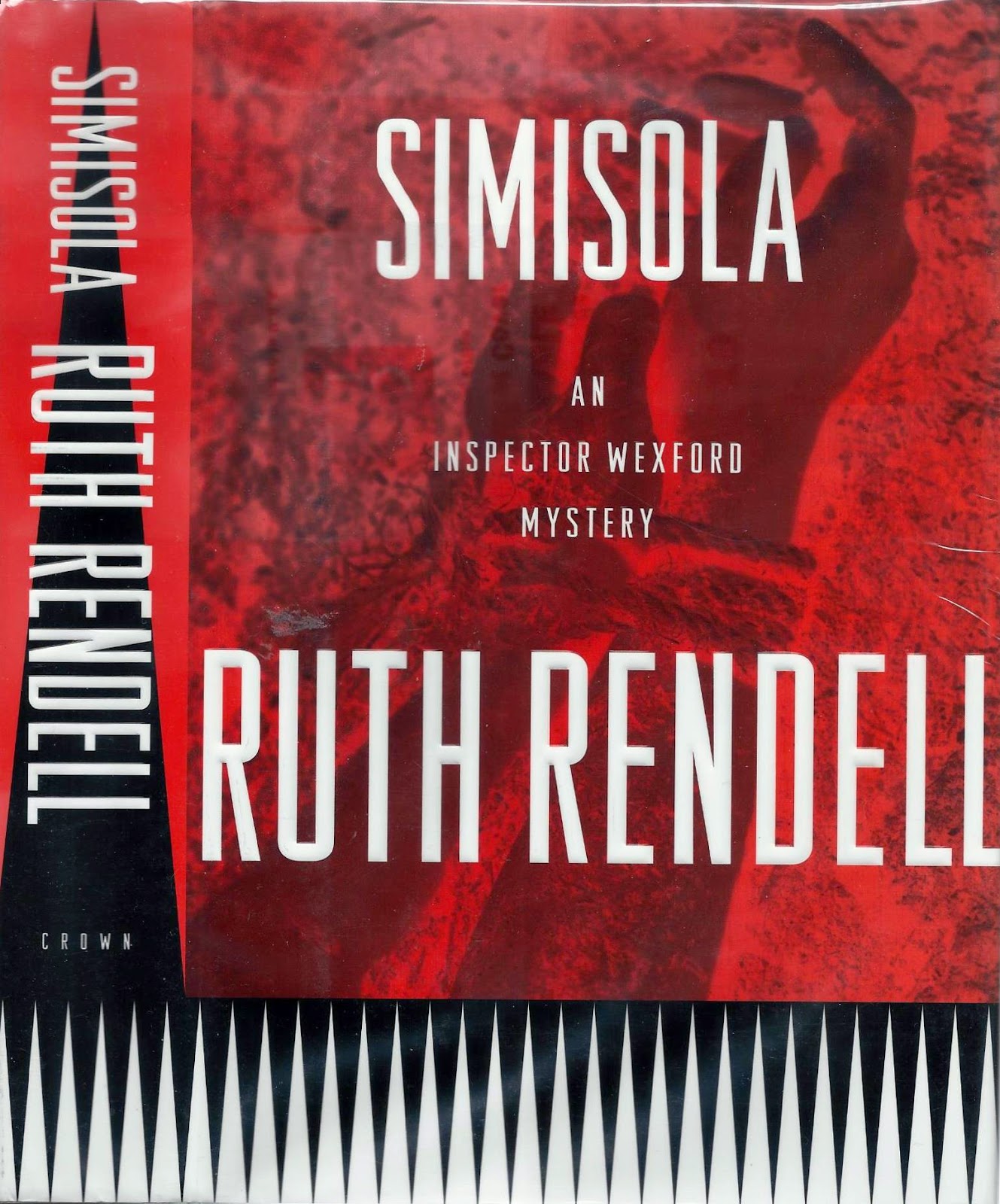 The American hardcover edition of Ruth Rendell's Inspector Wexford detective novel Simisola (1994) carries a blurb from Publishers Weekly that describes the novel as "at times like a contemporary Middlemarch with a murder mystery at the heart of it."

There is no doubt that with Simisola Ruth Rendell was aiming, like P. D. James in her Inspector Dalgleish novel, Original Sin, which appeared the same year,  at what she would see as a higher thing than a "mere puzzle" about a murder and its solution, a novel of realism about social ills afflicting modern England.

I would say Simisola is a considerable success. Beyond doubt, it is a great improvement on a previous Wexford "social problem" novel, An Unkindness of Ravens (1985).  If Ravens is much inferior to P. D. James' contemporaneous A Taste for Death (1986), I would say that Simisola is superior to James' Original Sin.

It is difficult to fully evaluate Simisola as a social problem novel because of a practical problem inherent in all mystery reviews, that of the imperative of avoiding "spoilers."  So I will try to be as circumspect as I can in my discussion (warning to anyone who picks up the American edition: it reveals too much on the jacket about the plot, in my opinion).

It is true that Simisola is Rendell's premier racism novel, yet I would argue that class issues--particularly the exploitation of the poor by the rich--ultimately are the strongest concern here (race and class do intersect, of course, and gender issues also are addressed, although more cursorily).

Since the 1990s Rendell, though herself politically to the left, has in her Wexford novels continually decried what her surrogate Wexford deems "political correctness," to the extent of creating a character evidently deemed by many the most irritating person in the Wexford canon, the excruciatingly and arguably impossibly politically correct Hannah Goldsmith.

Although Rendell continually raps racism and misogyny in her books, she has also made clear that she does not believe "political correctness" should exempt from criticism misdeeds by women and members of minority groups. 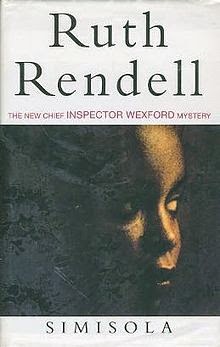 Perhaps the most obvious example of this attitude can be found in the interesting but ill-fitting Not in the Flesh (2007) sub-plot about female circumcision, a subject about which Rendell has spoken out publicly with passion and conviction.

We see this attitude as well in Simisola, in Rendell's portrayal of the ambitious and wealthy couple Wael and Anouk Khoori.

*(not only the wealthy are indicted: Wexford's subordinate, Mike Burden, is on hand, as always, to represent middle-class obtuseness and complacency, while indifferent government bureaucrats also are pummeled).

The events of the novel take place against a backdrop of economic recession and much of the action revolves around events at the local Employment Service Jobcenter (ESJC), which also houses the Benefit Office. Bringing this matter even more to home for Wexford, both his all-too-frequently hapless daughter Sylvia and her husband have lost their jobs and are spending a great deal of time with Wexford and his wife, Dora.

Given the economic state of affairs in the United States for the last five years, this subject in a twenty-year-old British novel seemed rather timely.  I found both the race and class issues were deftly integrated with the mystery plot by Rendell. 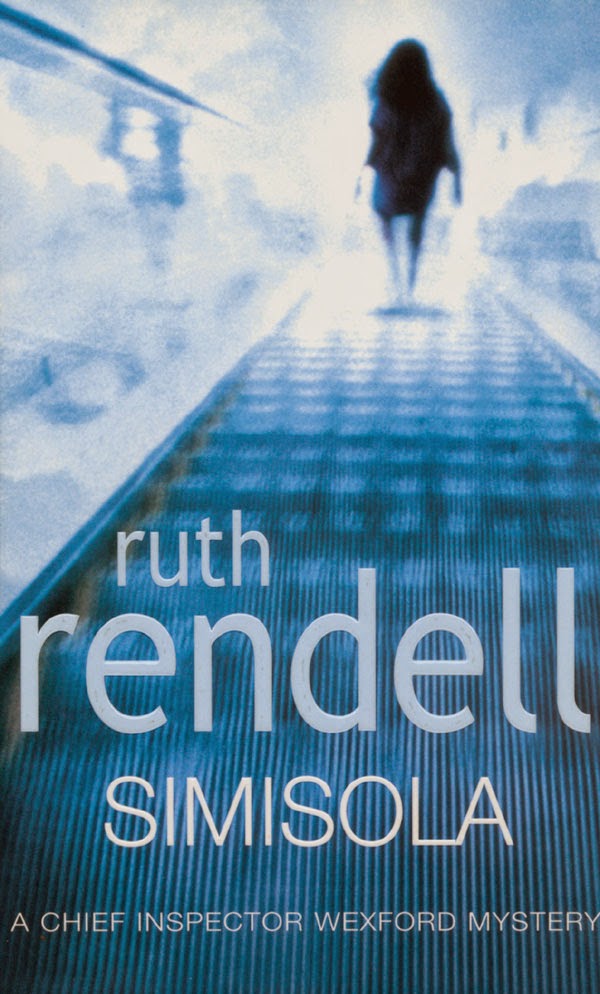 So what is the plot?  Inspector Wexford learns that Melanie Akande, daughter of his physician, Raymond Akande, a Nigerian immigrant, has vanished and he launches a police investigation into the matter. Melanie Akande disappeared after a visit to the ESJC, a fact that becomes sinister after the woman with whom she had her appointment is found dead, strangled in her bed.

The investigation of Reg Wexford and Mike Burden into the presumably related murder and disappearance is long and involved, allowing Rendell to introduce a large cast of memorable characters, including the fulsome local politician Anouk Khoori, wife of a multi-millionaire grocery store chain owner; Raymond Akande's stately spouse Laurette; Carolyn Snow, a highly vindictive wife of an adulterer; Cookie Dix, the much younger wife of a wealthy architect; Ingrid Pamber, with her amazing blue eyes; flat-bound witness Mr. Hammond, ninety-three years old but still mentally sharp; the blind but ever-mirthful Mrs. Prior; and Nigerian-born crossing guard Oni Johnson and her ESCJ habitue son Raffy (played by Idris Elba in the 1996 film version of Simisola--his sixth acting credit on imdb).

Rendell offers a clever alibi gambit and a particularly Christie-esque clue in the text; yet as the tale reaches its terminus the logic of the themes severely circumscribes the field of suspects, which leads me to disagree with the stated view of some contemporary reviewers that the solution is an astonishing surprise.

Thus I would not rate Simisola Rendell's greatest success among the Wexford novels as a puzzle.  It clearly is, however, a notable example of the modern crime novel that uses the mystery to explore social issues.  The whole thing is compellingly done by an author working at the height of her writing powers, making Simisola a book that I can enthusiastically recommend to mystery fans, even those of the more traditionalist sort. Incidentally, in a brilliant touch the novel's strikingly simple title is invoked but once, in the final line.

See also, at the Passing Tramp: