As mentioned in my last blog piece, crime writer Aaron Marc Stein (1906-1985) graduated from Princeton in 1927 and published his first novels, Spirals and Her Body Speaks, penned under his own name, in 1930 and 1931; and his first George Bagby novel, Bachelor's Wife, in 1932.  All this by his mid-twenties!

Spirals and Her Body Speaks are modernist, stream-of-consciousness novels, Stein's great grab at the brass ring of great literature, while Bachelor's' Wife, described as "the story of Tommy, a modern girl about town, who thought she was hard-boiled until she tried to forget the man she loved," appears much more a mainstream effort.


All these of these books, as well as Stein's first three detective novels, which appeared between 1935 and 1937, were published by Covici-Friede, a New York City firm that had published Radclyffe Hall's controversial, landmark lesbian novel The Well of Loneliness in 1928.  The firm also published John Steinbeck and a small amount of mystery fiction, including the the early Anthony Abbot detective novels and Rudolph Fisher's pioneering African-American mystery, The Conjure Man Dies (1932).

I am now engaged in writing the second book [Her Body Speaks] in such time as I have to spare from the activities by which I earn my bread and an occasional bit of butter.  My hungry mouth is fed by the proceeds derived from the writing of an odd form of art criticism for the New York Evening Post.  I have been acting as editor and critic of the antique section of that daily for two years....I have been also writing occasional articles for magazines.

A bit of a dust-up followed the publication of Spirals, when it was attacked in the pages of the Princeton Alumni Weekly [PAW], by a pseudonymous reviewer, "Jenkins Gruffanuff" (see the works of William Makepeace Thackeray), who condemned the novel as obscene.

At least two Princeton alumni came to Stein's defense, writing letters of protest to PAW. Robert Rau demanded a retraction of the review, insisting that the failure to make one would "stand as an insult to every Princeton gentleman."  David McKelvy White expounded on the iniquity of Mr. Gruffanuff at even greater length.  The reviewer had launched a "diatribe" against Spirals, declaring the novel "lewd, lascivious, filthy and obscene," complained White, yet he, White, found himself

quite unable to guess what it was that caused the outburst...Jenkins gives us no hint, content with quoting, at considerable length, the Federal Statutes relating to "lewd literature."...I can only wonder what curious obsession in Jenkins' mind is thus hinted at....

According to his New York Times obituary, Robert Rau (1907-1994; Princeton '28) was "an import-export executive and a civic leader in Manhattan."  He also served on the board of directors of the United Jewish Appeal, a philanthropic organization.

David McKelvy White (1901-1945; Princeton '25), the son of a prominent Ohio Democratic politician, earned a graduate degree at Columbia University and taught English Literature at Brooklyn College between 1928 and 1937.

He was a member of the Communist Party and in 1937 went to Spain to fight for the Republican cause in the civil war there.  He apparently committed suicide in 1945, for reasons that, according to historian Matthew Young, "remain obscure, although explanations tend to find their source in his imminent expulsion from the CP.  David's openly gay lifestyle (having lived with a long-time partner during the 1920s and 1930s), combined with his close associations with recently denounced CP leader Earl Browder, made him a target."

I think this matter sheds some interesting light on Stein at this time. Stein was the son of a Dr. and Mrs. Max Stein who in 1930 lived at 799 Madison Avenue (now home to the fine French linen store Frette).

His older sister, Miriam Anne Stein (herself later an author of three mystery novels), graduated from the Columbia School of Journalism in 1925.

Aaron Marc Stein (or "Rod" as he was known to friends) obviously came from a prominent Manhattan Jewish family and was ambitiously seeking to make his way into higher literary circles. The New York Evening Post once noted that when Stein first appeared to work at the paper he "was carrying a copy of Aristophanes' 'The Frogs' under his arm....his copy was in the original Greek."

What was it about Spirals that so vexed Jenkins Gruffanuff? I haven't yet read Spirals (I have ordered a copy; it is rather a rare book), but it is described in a review in The Sentinel, a Chicago Jewish newspaper, as a "narrative in brief, swift strokes" in the mind of  a student, Anthony Todd, of "outstanding incidents of four years in college life at Princeton" (The Sentinel, 25 April 1930, 47).

An interesting tidbit about the novel comes in a New York Evening Post article, "Womanless Book By Stein Published."  In the body of the article it is noted, tongue-in-cheek, that "Mr. Stein has been asked to write several magazine article to explain the absence of the fair sex from his novel. As soon as he evolves an interesting theory, he expects to respond to the requests for an explanation."

Did Jenkins Gruffanuff detect homosexuality in Spirals, a "womanless" college novel?  I do not know, but I am finding some suggestive elements in Stein's crime fiction.  Perhaps Stein was--like, in all likelihood in my view, Patrick Quentin/Q. Patrick/Jonathan Stagge (Richard Wilson Webb and Hugh Callingham Wheeler), Milton M. Propper, Rufus King and Todd Downing (all reviewed on this blog)--one of the notable 1930s gay American detective novelists, not acknowledged as such at the time. 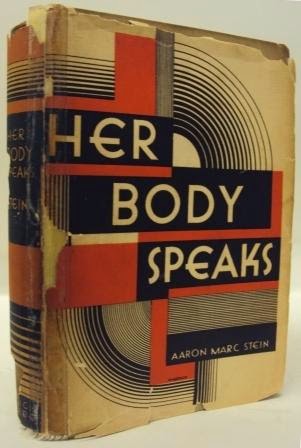 In any event, Stein's second novel, Her Body Speaks, supplied the women Spirals lacked.  Another stream-of-consciousness novel, with a strong psychological element, Her Body Speaks tells the story of "Edith Kent, a sex-starved unmarried woman of thirty-three" who witnesses a murder.  The review of the novel in PAW (not by Jenkins Gruffanuff but by Franklin Gary '27) concluded that

Mr. Stein is more interested in psychology and technique than in telling a story or in creating characters.  His technique often suggests the techniques of well known  modern novelists, Joyce, Faulkner, Mrs. Woolf, even O'Neill.  But none of these writers is interested primarily in technique for its own sake....

What was a fiction writer more interested in technique than characters to do in the 1930s? Why, become a detective novelist, of course!  Next post, I will be writing in detail about (finally!) Aaron Marc Stein's George Bagby mystery fiction.
Posted by The Passing Tramp at 12:51 AM