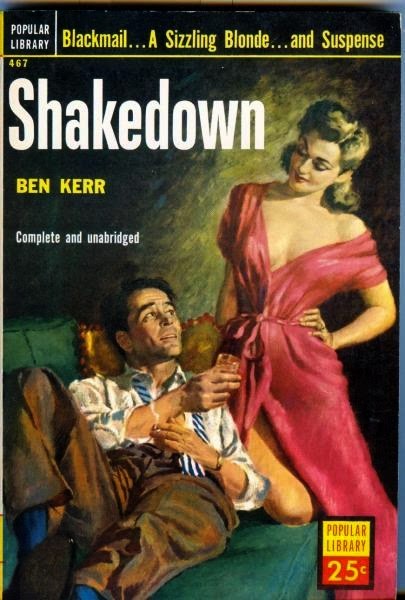 This week I plan to review a hard-boiled mystery bluntly titled Some Day I'll Kill You. The book was first published in 1939 and later by Popular Library in 1953.

I think that the descriptions, short and direct, bring home the hard-boiled world:

Don't Crowd Me by Evan Hunter
The story of a woman who tempted one man too many.

Don't Get Caught by M. E. Chaber
Some women have everything--but a conscience.

Naked and Alone by Michael Lawrence
She played with fire and got burned.

Double Cross by Mike Moran
Velma's goal was every man in town.

All the Way Down by M. E. Chaber
His mission was dangerous--hers was amorous.

Booze, babes, cigs and couches--looks like they all get a lot of action! If anyone out there has read any of these books, I would love to hear about it.

And I know the stunning ladies on the covers naturally get most of the attention, but surely we would be remiss if we neglected to commend the gentlemen for color matching their blue ties and blue socks.  Dames notice these things.
Posted by The Passing Tramp at 12:43 PM