Ann Cleeves began her crime writing career almost thirty years ago, in 1986, back when P. D. James and Ruth Rendell were the twin rulers of the English crime scene. 1986 saw the publication of P. D. James' A Taste for Death and Ruth Rendell's Barbara Vine novel A Dark Adapted Eye, both of which were raved on both sides of the Atlantic.

But although Cleeves published fourteen well-received novels between 1986 and 1997, I think it's safe to say that she began ascending to a new level of success starting in 1999 with the publication of The Crow Trap, the first of her Detective Chief Inspector Vera Stanhope novels.

Six Vera Stanhope novels have appeared since then, the most recent of them the newly-published Harbour Street.

I should also add that Cleeves also has another very successful book mystery series, the Shetland series, with Detective Inspector Jimmy Perez.

So far there are five novels in this series, published between 2006 and 2013 (the first book in the series won the coveted Gold Dagger from the CWA).  This series also has inspired a British television series, Shetland.  So you could rather say that Ann Cleeves' ship has come in, so to speak, commercially!

Harbor Street actually is the first Vera Stanhope mystery I have read (shame on me).  I recently picked up both it and the previous book in the series, The Glass Room, which has gotten a lot of praise from Martin Edwards and others.  I liked Harbour Street enough to make me want to go on and read The Glass Room (oddly, the only book in the series that has not been adapted for Vera).

At times I was reminded of the better work of James and Rendell, as well as as that of Karin Fossum, a Norwegian crime writer Cleeves greatly admires.  However, I also had some reservations about the novel.

Harbour Street concerns the stabbing murder of an elegant elderly woman in Mardle, a coastal town near the city of Newcastle in northern England.  The dead woman's body is discovered on the Metro by Vera Stanhope's favorite underling, Detective Joe Ashworth, and his daughter Jessie, who are on their way to attend a Christmas choral service.

This is one of the niggles I had with this novel, incidentally.  I believe that in Silent Voices (2011) Stanhope herself discovers a murder victim at a fitness center (she is trying to get her weight down); now Ashworth and his daughter discover one. This is rather more like Jessica Fletcher Land than a police procedural on this point: the sleuths don't have to go to the bodies, the bodies come to them! 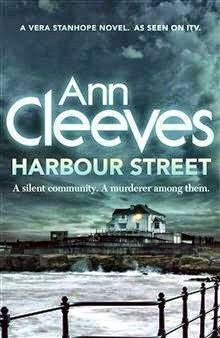 The case takes Stanhope and Ashworth and the rest of the team (the only other member of which stands out at all is Detective Constable Holly Lawson, who Vera tends to dislike because she's young, attractive, ambitious and lacking in empathy) to Mardle's Harbour Street, particularly the guest house located there, where the murdered woman, Margaret Krukowski, lived.

Cleeves does a fine job of conveying the atmosphere of the street.  She has said in interviews that she loves studying isolated locations in her books and I can well believe it from Harbour Street.

The other main locale in the tale is a woman's shelter where Krukowski volunteered, which gives Cleeves an opportunity to address a bit social problems afflicting women in modern England.

Cleeves delves deftly into the lives of some her characters (others, especially several of the men, are not as developed). She especially focuses on Kate Dewar, a former pop singer who owns the guest house and lives there with her two teenage children. Kate is widowed with a new man in her life and she is having to balance running her business and her romantic life with managing her children--it's all very challenging, and now she has a murder in the mix.

I like Stanhope as a character too (I suppose like everyone else I should call her "Vera"--why do we call her by her first name but male detectives by their last names). In Stanhope I see aspects of some famous male fictional detectives (Morse, Dalziel, Diamond), but she's more empathetic, at least with the downtrodden (socially ostracized woman especially).  I also like Ashworth--he seems surprisingly nice and normal for an fictional police detective these days (nowadays we are a long way off from Freeman Wills Crofts' Inspector French).

The mystery has been much commended in reviews for its "surprise" culprit.  I was taken in too and would like to comment more about Cleeves' interesting misdirection strategy, but can't, of course, because of spoilers.  There is some fair play clueing to the culprit, but I still have doubt about the psychological fairness of the solution (can't say more than that).

Stanhope herself is lost at sea during much of the investigation, so much so that I didn't think too much of her as a professional detective, to be honest, as much as I liked the character.  Stanhope is much too prone to imagining solution scenarios and then recklessly tearing after them.  It's one thing when a Golden Age amateur sleuth does this, another when it's a professional police detective. I would think Vera would be getting reigned in much more often than she seems to be.

At one point she decides that Krukowski's murder must have something to do with a murder fifty years in the past--a murder in the past she is only hypothesizing, without any evidence at all.  She decides a Harbour Street denizen must have been involved in this supposed murder, so she gets permission--how I couldn't see--to have the police dig up this person's entire property, to look for the body of another person whom there is no convincing reason to believe is dead in the first place.

The dramatic, "made-for-TV" style ending I had some problems with also, in that it piled on three unlikely coincidences in a row.  This will probably play better on television, when there is less time to think about the unlikeliness of what one is seeing unfold.

Fortunately for Stanhope and her team, when the time comes to wrap up the novel, the culprit obligingly confesses everything, in the grand tradition.

I hope this doesn't sound unduly critical, but some parts of the book were so good they raised very high expectations in me.  Parts of the book are on the level with James and Rendell in their heydays, I think. I will certainly be going on to read The Glass Room.
Posted by The Passing Tramp at 3:34 PM