From Country Houses to Continental Pensions and Overseas Outposts: The Finger of Fate (1930) and the World of Sapper

"To have two hot-tempered men who loathe one another with a bitter loathing in a house-party is not conducive to its happiness."


Although best-known for his Bulldog Drummond series of novels (continued after his death until 1954 by his writer friend Gerard Fairlie, 1899-1953), the crime writer Sapper (Herman Cyril McNeile, 1888-1937) wrote a great many short stories.

Sapper was a great admirer of the American author O. Henry (William Sidney Porter, 1862-1910), master of the short story twist and edited and introduced a massive anthology of O. Henry tales that was published in England by Hodder & Stoughton in 1930 and served as a standard collection for many decades.*

*(interestingly, both men died comparatively young, at right about the same age: Sapper was 48 and O. Henry was 47)

Nearly two dozen collections of Sapper's own tales were published, including five volumes of war stories between 1915 and 1918--during this time he saw a great deal of war action in France, where he was gassed--and the anthology 51 Stories (1934), which gathered Sapper stories dating back, in book form, to 1921.

Except for his two volumes of Ronald Standish mystery short stories (1933, 1936), which obviously were inspired by another great master of the short form, Arthur Conan Doyle, none of Sapper's collections were, to my knowledge, exclusively devoted to crime and mystery.

However, the author was a mainstay of The Strand Magazine and in most of his collections readers will find crime, mystery and occasionally supernatural tales.  In my view, his short tales can be quite entertaining, though they inevitably present "issues" to many modern readers, arising out of the author's retrograde social attitudes.

An arch-conservative Englishman, the grandson of a prominent minister and the son of a governor of prisons, Sapper believed in the importance of traditional honor, good breeding, super patriotism and social hierarchy. The full-throated endorsement of such concepts that he gives in his fiction makes it unpalatable to many readers today, though others put it aside, just wanting to enjoy a good tale. 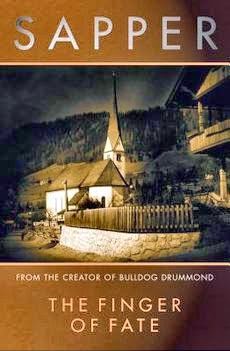 There are fourteen tales collected in The Finger of Fate (1930), one of the last collections of Sapper short stories published during the author's lifetime (there followed 51 Stories and the Ronald Standish pieces); and some of them are quite good.

There are a few disappointing crime stories, "The Black Monk," "The Hidden Witness," "Will You Walk into My Parlor?," and "A Question of Mud," as well as two dullish paeans to the squirearchy, "That Bullet Hole Has a History" and "A Question of Identity."

"The Black Monk" appealingly makes use of a ghost story superstition about an old mansion, but it is altogether too predictable.  We know who the villain is right off, when Sapper's narrator tells us:

I've always felt that there was something about him, something I couldn't define, which just spoiled an otherwise first-class sportsman.  Perhaps it was that he didn't lose very well at games.

In Sapper's world one's attitude to sport offers one of the most accurate measures of one's character.

There is a last-sentence zinger that is very similar to that in Rupert Croft-Cooke's splendid short story (adapted on Alfred Hitchcock Presents), "Banquo's Chair" (1926), which preceded "The Black Monk" into print by two years.

Similarly, "The Hidden Witness," published in The Strand in 1928, is altogether too similar for its own good to Agatha Christie's The Murder of Roger Ackroyd (1926).  "Will You Walk into My Parlor?" feels like an episode from a Bulldog Drummond novel.

In "The Idol's Eye" a cursed Eastern relic seems to work its malevolent magic yet again, while in "The Green Death" we have one of those "killer room" tales (see Eden Phillpotts' The Grey Room, 1921, and John Dickson Carr's The Red Widow Murders, 1935, for novels that make use of this motif).  Both are great fun. "The Green Death" even has genuine detection, though the solutions in it and "The Idol's Eye" as well most definitely are what one might call pulp science.

In these stories Sapper makes clear the two dead men are no great loss to country house society.  "It struck me as he sat there half-sprawling over the table, what a coarse animal he was," the narrator of "The Idol's Eye" comments about the soon-to-expire Fenton.

Similarly, the victim in "The Green Death," one Denton (yes, Sapper only bothered to change one letter in the name--there's economy!), is designated no less than the "swine-emperor" by another character. Any reader of Sapper will recognize that swine is the deadliest conceivable insult in Sapper-land--it's even worse than cad or bounder.

"The Two-way Switch" is another murder tale, but this time the locale is a hotel in Switzerland rather than an English country house.  Yet another objectionable Englishman meets his quietus, stabbed with his own dagger (he used it as a letter opener).  Here, the main suspect is one Pedro Gonsalvez de Silvo, to whom all the bright young English people at the hotel casually refer as the "Dago."

Fortunately, the tale is cleverer than the people at the hotel. 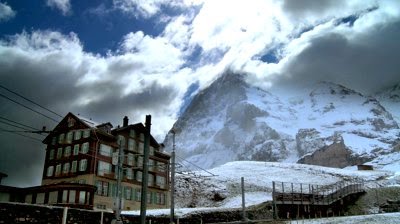 This brings us to an essential element of Sapper's fiction: its extreme, and often unsavory, clannishness. Sapper's world is a world of strictly maintained "sets," such as the "country gentry" set and, especially obnoxious today, the "white" set.

I found fascinating to see these attitudes at work in "The Two-way Switch."  Even the relatively sympathetic narrator, who doesn't think de Silvo is quite so bad as the others make out, won't play cards with the poor man.  Trouble starts in the tale when kindhearted Beryl Carpenter ("adorably pretty...and...quite unspoiled") dances with de Silvo.  "Poor little blighter," she declares, "he can't help being what he is."

Another tale where we see this clannishness occur is the admittedly quite clever shipboard tale "The Diamond Hair-Slide."  Here the English "white" set instinctively recoils from another passenger, Mrs. Delmorton.  Although, according to the narrator, she "was invariably most beautifully dressed" and, indeed, "an extremely good-looking woman," nevertheless she is looked down upon for being of mixed racial heritage ("there was an undoubted touch of the tar brush"--"that terrible but to the man who has lived much abroad").

We see this quality of Sapper's stories yet again in "Fer de Lance" (note it has the same title--derived from the deadly viper--as the Nero Wolfe novel, but Sapper got there first this time), a tale atmospherically set in Costa Rica, at a banana shipping depot.  No crime in this one, but rather a tale of the moral redemption of an English wastrel.  "White is white, however far down it has sunk," Sapper insists.

While sentiments like this will grate, Sapper can be effective in his tales of drunkards who through their personal failings have lost caste in foreign countries and colonial outposts. The two other good examples of this type of Sapper tale in this collection are "A Hopless Case" (South Africa, sad) and "The Undoing of Mrs Cransby" (Burma, amusing). 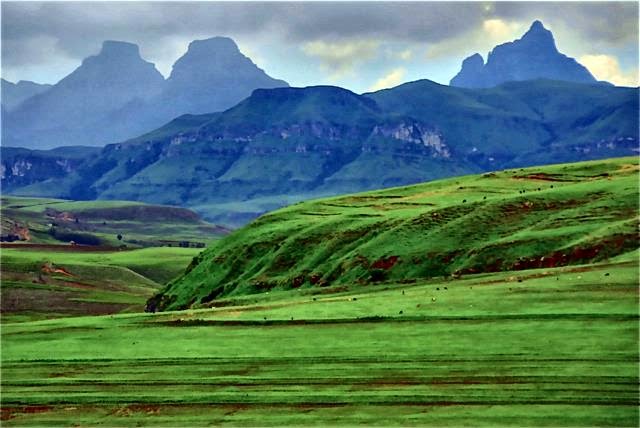 The title story, "The Finger of Fate," takes readers to Austria, where an Englishman must, for the love of a good woman, face down a vile Baron in a duel to the death. Here is the narrator on the Baron von Talrein:

Seldom, I think, have I seen a more arrogant and unpleasant-looking face.  And yet it was the face of an aristocrat.  Thin-lipped, nose slightly hooked, he was typical of the class of man who, in days gone by in France, would have ordered his servants to drive over a peasant in his way, rather than be delayed.

"The Finger of Fate" is a suspenseful tale, with a fine zinger in the last line.

We have been told for some years now that the Golden Age of crime fiction in England was dominated by women writers, that English readers after the disillusioning First World War rejected in fiction violence and the cult of manliness; yet Sapper, whether with his Bulldog Drummond novels or his many short stories, which are filled with crime and adventure, undeniably was one of the most popular figures of the era.  By 1936, just a year before his death, it was estimated that some five million copies of his books had been sold.

Sapper's fiction is not "feminized," as so much of Golden Age mystery is said to be, even though it shares settings that are similar to a number of Crime Queen works.  I was surprised at just how volatile his country house settings are.  As in those Continental pensions and overseas outposts, Sapper's country house settings seem to exist as martial stages for combat between men, typically over women.

Women in these tales tend either to be "bad" (older, jaded types like Mrs. Cransby) or "good" (younger "girls" invariably designated "adorable" and "unspoiled"). With his "adorable" young women Sapper evidently so liked the name "Beryl" that he used it for similar characters in no less than three of the stories in The Finger of Fate: Beryl Langton, Beryl Carpenter and Beryl Kingswood!

Occasionally women step to the forefront and become primary players on Sapper's stage, but more often these are men's tales, where women serve, intentionally or not, as goads for violence between assertive men.

It is an interesting world of which to get a glimpse, if not always an appealing one.  On the whole, I must admit I prefer the gentler (if no less malevolent) world of Agatha Christie to that of Sapper, but I find it enjoyable to drop into Sapper-land on occasion.

How would Sapper have fared had he lived a normal lifespan and survived into the 1950s or 1960s? He was, after all, only two years older than the redoubtable Agatha Christie.

Christie's somewhat underrated 1964 Miss Marple detective novel, A Caribbean Mystery, opens with the elderly amateur sleuth on vacation in the West Indies (at the behest of her clever modern writer nephew, Raymond West), politely listening to a retired army man, Major Palgrave, as he drones on and on about the exciting experiences of his younger years, when Britain ruled over much of the world:

It was a routine with which she had been well acquainted.  The locale varied.  In the past, it had been predominantly India....But the pattern was essentially the same. An elderly man who needed a listener so that he could he could, in memory, relive days when he had been happy....

I doubt Sapper would have been as adaptable to modern ways as Christie in the years following the Second World War, but he certainly left us a fascinating--if sometimes offputting and  unsettling--body of Golden Age crime fiction.

The Finger of Fate is available, like a number of additional Sapper works (including the previously reviewed Bulldog Drummond novel Knock-Out), in a nice paperback edition edition from the House of Stratus.
Posted by The Passing Tramp at 11:40 PM