The Juvenal case had gripped the city like a yellow-fever plague.

"Apparently the murderer tried to get him three different ways: poisoned wounds, poison in the stomach, and choking to death.  Quite an orgiastic proceeding."

"Please, messiers, if you will let me go away from this house....This house is voodoo'd, messieurs.  I would rather be put in a room with copperheads crawling over my body."

Originally serialized in five parts in 1930 in Argosy before its publication as a novel in the United States and United Kingdom in 1931, Kenneth Perkins' Voodoo'd vividly tells a tale of a series of horrid murders at an old New Orleans mansion.

With this story Argosy readers definitely got full value in thrills for their fifty cents!

Basil Boyean, wealthy scion of New Orleans Creole aristocracy (or, as he is dubbed in the city press, "New Orleans capitalist and club man"), has a little problem: he recently had a gland transplant--and it seems that the gland he received came from one Bouche, the notorious convicted murderer of Bertram Juvenal!

The latter man was found dead at the Juvenal manse"with his throat lacerated by finger marks and swollen from a virulent poison."

Upon his conviction for the terrible crime, Bouche dramatically "escaped from the courtroom to the street, where he fell under a rain of bullets from three different patrolmen" (happily--or unhappily as the case may be--the cops missed that gland).

After discussion about all this at the Bourbon Club, Boyean, an impressionable sort, begins to imagine that his personality is being taken over by that of the notorious Bouche. This part of the novel resembles Arthur Conan Doyle's 1923 story, "The Adventure of the Creeping Man" (glands were a hot subject in those days).

Boyean decides to stay at the Juvenal manse, a decaying mansion owned by Bertram Juvenal's brother, Abel.  The very night he arrives there, Abel's son Lucien is murdered!

Lucien Juvenal is found dead in a locked bedroom adjacent to Boyean's, his throat lacerated like his father's.

Could the the murderer be Boyean, either under the dead Bouche's control (that gland, you see), or mad and thinking he is?  Or is something else afoot?

Along with the New Orleans police, Boyean tries to solve a murder that he fears he himself might have committed.

We're in for a wild ride, as three more deaths take place and the hand of voodoo is raised against the Juvenal manse.... 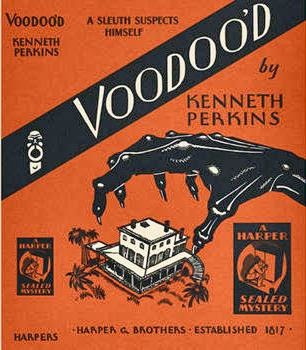 I liked this book.  It's atmospheric, with an interesting plot, and a genuine detective novel despite all the thriller elements.

The locked room problem is almost immediately solved (and is no great shakes anyway), but there is clueing throughout the novel and some clever mechanics in the plot.

I actually was rather reminded of S. S. Van Dine's classic tale of family extinction in a decaying old mansion, The Greene Murder Case (1928). There is an evocative pall of doom that hangs over the house, as people drop like flies.

Perkins, who was familiar with New Orleans, did a better than usual job depicting local dialect, I think, distinctively delineating the speech patterns of Creoles and Irish cops, blacks and whites. There are three major black characters in the novel, and all of them speak differently from each other (it is mentioned in the novel that there are black cops on the New Orleans police force--it would have been nice to see a few).

Voodoo'd would have made a suspenseful film or radio play.  Perkins took some elements from the book (including some of the character names) for his stage play, Dance with Your Gods (1934), in which, as mentioned in my previous blog post, Lena Horne played the "quadroon girl."

Unfortunately, the play decidedly flopped on Broadway; yet Voodoo'd works its magic on readers, putting them under a spell of suspense.  This was one of Harper's Sealed Mysteries, all of which came with a seal near the end daring readers to return the book with the seal unbroken and the book unfinished (John Dickson Carr's It Walks by Night had been published in this series a year earlier).

I can't imagine anyone not breaking the seal in this case.
Posted by The Passing Tramp at 7:01 AM