Kenneth Taylor Perkins was born in 1890 in Kodaikanal, India, the son of American missionaries James Coffin and Charlotte Perkins, and died in Los Angeles in 1951. After the death of his mother in 1897 and his father's remarriage in 1904 (and around the time of a certain earthquake), he was sent to San Francisco to live with his wealthy, shipping merchant grandfather, one of the original Argonauts in the California Gold Rush.


Like his father, Kenneth Perkins graduated from the University of California (Berkeley) with a masters degree in English (his father later received a degree in divinity from Princeton Theological Seminary and served as an Indian missionary for 29 years).

As a student at UC-Berkeley, Perkins was a member of the English Club, which performed two of his plays, "Blind Alleys" and "Baghdad" (in the latter play events are seen successively through the eyes of first a spiteful woman and then her amiable husband).

Between his graduation in 1914 and the American entry into the First World War in 1917, Perkins was employed at Pomona College as an assistant instructor in English and drama to Reginald Pole, an Englishman who had been a close friend of poet Rupert Brooke and was an admired stage actor, director and playwright (Pole's son Rupert--named after Brooke, I presume--married the writer Anais Nin).

During the war  Perkins was a second lieutenant in the United States field artillery. Afterward, spurred on by Frederick Schiller Faust, a friend of his from UC-Berkeley who wrote Westerns under the celebrated name Max Brand, Perkins began publishing stories and novels.

Some of these works were mysteries and some--those written under the pseudonym J. O. Quinliven--were horror; but most were westerns.  Perkins' novel Ride Him, Cowboy (1923) was filmed twice, the second time (1932) with John Wayne in the lead role.

Wayne is not the only star with whom Kenneth Perkins' name is linked. The author made a stab at stage glory and had three plays performed on Broadway: Creoles (1927), Dance with Your Gods (1934) and Louisiana Lady (1947; a musical version of Creoles).

All three plays are set in Louisiana.  Creoles, a comedy, was the most successful, but Dance with Your Gods, a voodoo thriller, is best known today, because it was instrumental in the rise to fame of Lena Horne, who played the key role of the "quadroon girl."

Unfortunately, the play itself was panned by New York critics.  According to James Gavin's book Stormy Weather: The Life of Lena Horne (2009), New York Herald Tribune critic Arthur Ruhl took time in his review to denounce "gay audience members who went to see the 'animated pornography' of the shirtless, muscular black actors."

Kenneth Perkins published two mystery novels, Voodoo'd, upon which Dance with Your Gods clearly draws, and The Mark of the Moccasin, set in a creepy mansion on the Texas coast.

From what I have made out, The Mark of the Moccasin was serialized in Argosy All-Story Weekly in 1927 and first published as a novel in England in 1929.

Under the title The Moccasin Murders the novel saw publication in the U. S. in 1931, after the success of Voodoo'd, which was serialized in Argosy in 1930 and then published as a novel in 1931 in the United States and England, in the latter country under the splendidly Gothic title The Horror of the Juvenal Manse.

So, in summation, here is Kenneth Perkins' contribution to the crime novel literature: 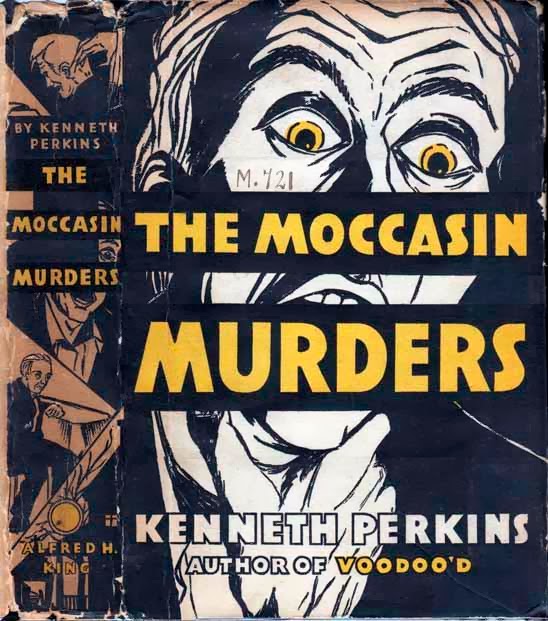 I've read about forty percent of Voodoo'd so far and, considering its subject matter, which includes not only voodoo but gland transplants, it's a surprisingly restrained and dignified book.  Will Perkins manage to keep it up until the end or will the novel collapse into a rubble of nonsense?

For what it's worth, William C. Weber--as "Judge Lynch," the longtime crime fiction critic for the Saturday Review--favorably compared the "voodoo passages" in Perkins' Louisiana mystery thriller with those in The Magic Island (1929), William B. Seabrook's bestselling book on Haiti that is credited with popularizing the concept of the zombie.

As far as I know, Voodoo'd was the second American crime novel after the publication of The Magic Island employing voodoo as a central motif, the first being John Esteven's Voodoo (1930).  Jacques Barzun and Wendell Hertig Taylor were dismissive of Esteven's novel in A Catalogue of Crime. We'll see what I think of Perkins' Voodoo'd.

Also check out this review by John Norris of a later mystery dealing with some similar subject matter, Hulbert Footner's The Obeah Murders (1937).