The Longest Pleasure (1981), by Douglas Clark

English writer Douglas Clark had a knack for ingenious plotting in his mysteries.  His fictional murders often center on some sort of clever medical idea.  In The Longest Pleasure (1981) four geographically disparate cases of botulism occur in England.  In each case the source of the botulism has been traced to cans--or tins as they say in England--of meat, all of which were purchased in supermarkets of the same national chain.  With it appearing that a malevolent human agent is behind the poisonings, Chief Superintendent Masters and Chief Inspector Green and their loyal team are put on the investigative job. Woe to the poisoner! 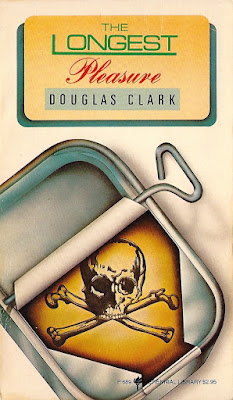 This is a smartly designed and original police procedural where we get to follow step-by-step the deductions of the police.  It's not a standard whodunit, certainly, but it presents an interesting problem for the reader.

Admittedly, there's a bit of an antiquated feel, I think, in terms of gender relations. Women employed in the workplace are definitely in very subordinate positions and the wives of Masters and Green fall very much into the "supportive spouse" category, reminding me rather of Freeman Wills Crofts' Inspector Joseph French and his wife, Emily (though unlike with that pair it's clear that Clark's couples enjoy a sexual lives together). On the other hand, one might argue that gender relations in this novel are positively advanced compared to those in the contemporary mysteries of, say, Colin Dexter.

There are some attempts at the end of the novel at psychoanalyzing the culprit, something you don't typically find in Crofts, who usually (though not always) concentrates on more material motives for murder.  But, really, the plot is the thing here.  Clark does fall somewhat into "lecture mode" in this particular mystery, with quite intensive discussions of theory and some heavy doses of botulism detail, but as someone who never took much science in school I find this an interesting subject to read about in detective novels. It's something I enjoy in the crime fiction of R. Austin Freeman and John Rhode as well.

And for lit buffs, the title of the novel is, after all, drawn from Byron:

Now hatred is by far the longest pleasure;
Men love at haste, but they detest at leisure.