Death Aplenty: Service of All the Dead (1979), by Colin Dexter

And why, oh, why, all this peculiar palaver in the church?

The British crime writer Colin Dexter (1930) will always have my gratitude for having introduced to the world Inspector Morse and Sergeant Lewis, so memorably portrayed by the late John Thaw and by Keven Whately in what remains the best British mystery series I have seen: Inspector Morse (1987-2000).

The series softened some of book Morse's less appealing edges, creating a character with whom some viewers literally fell in love.  As written Morse seems so much the prototype of the modern fictional  police detective.   He is not the placid, contented, happily married police detective one finds in the Golden Age mysteries of Freeman Wills Crofts, but  a contemplative, sometimes morose, loner, a crosswords and music lover.  An impulsive and intuitive romantic, he loves the ladies, but seems destined always to be disappointed in love.  This complex and sometimes neurotic character is brilliantly balanced by Morse's Everyman Watson, the phlegmatic Sergeant Lewis.

The wonderful portrayals of these characters explains, I think, why the Inspector Morse television series seems to have lingered in popular memory more than contemporary series adaptations of crime novels by PD James, Ruth Rendell and Reginald Hill, writers whose crime novels I prefer to those by Dexter, on the whole. (The series also has had two more successful spin-offs of a sort: Inspector Lewis, in which Morse's promoted sidekick gets higher billing, and Endeavor, about a young Morse; see my reviews of the latter here and here.)

My introduction to Morse was through the television series and I must admit that I found the original scripts superior to those adapted from the novels (with some exceptions with the later books in the series).  Some of this may simply reflect the challenge in scripting adaptations, but in the case of Dexter's fourth mystery, Service of All the Dead (1979), at least, I found the novel itself disappointing. Service of All the Dead marked the beginning of England's Crime Writers' Association's love affair with Dexter.  He won the CWA Silver Dagger for that novel and again won the Silver Dagger two years later for The Dead of Jericho (1981).  He later won CWA Gold Daggers for The Wench Is Dead (1989) and for The Way Through the Woods (1992).

On the other hand Jacques Barzun and Wendell Hertig Taylor contrarily declared of Service of All the Dead in the second edition of their A Catalogue of Crime that the plot was "preposterous."  I tend to agree.

Although this Oxford novel makes little of a college background, Dexter does a nice job of depicting a church, St. Frideswide's, and its congregation, many of whom have secrets to hide.  The narrative is smoothly written and engrossing, reminding me somewhat of the works of P. D. James.  There's an action climax, followed by a proffered solution (false) and then another (true, though there's a twist on that as well).  But the disappointment for me came with the solution, which seemed extremely implausible.  I simply couldn't accept the way that certain characters in the novel were said to have behaved. 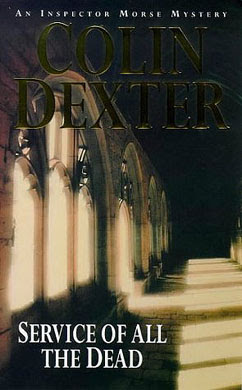 The novel has five murders, including the brutal  strangulation of a sympathetic child, and I found unconvincing the rationale that the author proffered for this wanton slaughter.  It's what Golden Age crime writer and critic Milward Kennedy used to disparage as "bookish": i.e., savoring of fiction and not of real life.

Of course no one should expect a classic style mystery to be an exercise in unadulterated realism, but I think one still needs to be able to swallow the solution (even if some heaping spoonfuls of sugar are needed). Otherwise we enter the land of fantasy.  Here I, like Barzun and Taylor, just couldn't buy it.

This charge of implausibility has long been leveled at Golden Age mystery, but I find a book like Agatha Christie's Murder on the Orient Express much more convincing than Dexter's in its bravura solution, despite carping about it from Raymond Chandler. (Obviously to avoid spoilers I can't go into detail here.)

The other problem I had with Dexter's novel is the way women characters are portrayed, but this is a common enough feature in Dexter's novels, particularly the earlier ones.  It seems an article of faith in them that young women, even teenagers, are attracted to middle-aged men in general and middle-aged Morse (who is 47 in Service, two years younger than was Dexter when the novel was published) in particular.

Questioning a class of teenage scholars, Morse surveys the student bodies, thinking "But at least two or three of the girls were decidedly decorative--especially one real honey at the back whose eyes seemed to flash the inner secrets of her soul across the room at him.  Morris [a missing music master] must have looked at her lustfully just once in a while?  Surely so....

And, sure enough, as this "honey" trickles to her next lesson, she wonders thoughtfully to herself "why she so often felt so attracted to the older men.  Men like this inspector fellow; men like Mr. Morris....Her mind went back to the time they'd sat in the car together.... 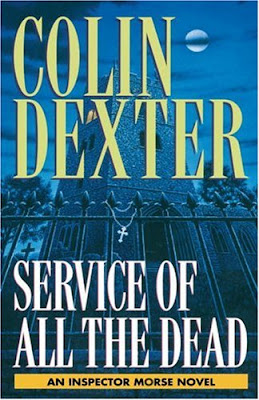 Women in Service generally seem to be motivated mostly by their desire for sex with males.  One, a married nurse already carrying on an affair, is thrilled to be invited by another man, a married doctor, to have sex with him ("I'm not much good at crosswords"/"I bet you're good in bed, though," goes the conversation, which would probably be deemed workplace sexual harassment today).

Morse's relationship with one of these emotionally needy women has rather an unsavory resolution, I think. (Tellingly this resolution was altered and softened for television.)  With Colin Dexter sometimes one feels that, as far as gender relations are concerned, one is reading not a modern detective novel but rather some hard-boiled crime tale from the 1950s, one that perhaps was retrograde even by mid-twentieth-century standards.

I often read people attributing this aspect of Dexter to that favored scapegoat, "the times," but it's not something I recall in contemporary British novels by other male detective novelists from Dexter's generation, like Reginald Hill, Peter Lovesey and Robert Barnard. However, if one can past this limitation, as I see it, and swallow the solution, there is some good stuff to be found in Service of All the Dead.  Colin Dexter's writing is always most readable.
Posted by The Passing Tramp at 5:03 AM