Gordon Meyrick's small body of crime fiction appeared between 1941 and 1943, the year of his most untimely demise at the age of 34.  These criminous titles are: The Green Phantom (1941), The Body on the Pavement (1941), Danger at My Heels (1943) and Pennyworth of Murder (1943).  However, the book for which Meyrick is best known--to the extent that he is known at all--is his posthumously published The Ghost Hunters (1947).  This collection of short stories about the exploits of Arnold Perry, a percipient paranormal investigator, was completed by Meyrick just shortly before his death, according to his publisher, though it was not published for four years.

Judging from The Body on the Pavement (to be reviewed here next post), Meyrick's crime fiction is more in the mystery thriller vein, involving gangs of crooks and clever master criminals.  It's a milieu with which Meyrick likely had at least some passing acquaintance, his having been a son of Kate Meyrick, England's between-the-wars "Queen of the Nightclubs." 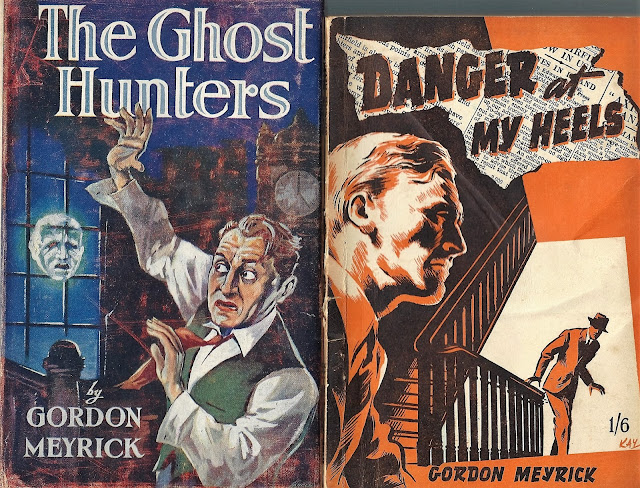 Kate Meyrick was born Kate Evelyn Nason in Ireland in 1875.  Having lost her birth parents by the age of seven, Kate was sent with her sister to live with a grandmother and two great-aunts in a sprawling mansion in Dublin (now a five-star Radisson hotel).

Here everything was of a bygone age, she later dryly recalled.  There were three servants who had been in the family for more than half a century, the gardener was eighty-four, the coachman only a year or two his junior.  The governesses set to educate my sister and myself were also of an age to harmonise with the surroundings.


Kate rejected matrimony with a wealthy man to wed a young doctor, Ferdinand Richard Holmes Merrick.  After their marriage in 1899 the couple moved to southern England, residing successively at Southsea and Brighton, where Dr. Merrick treated a clientele of mental patients.

Her marriage, which had long been troubled, finally broke down irretrievably after the First World War, when Kate sued Ferdinand for divorce and he counter-sued, citing a co-respondent.  No divorce actually materialized, but the couple permanently separated, with Kate being left custody of the minor children, including Gordon, who was ten at the time.


Now in her forties, Kate moved with her children to London and launched a colorful midlife career as a nightclub proprietor.  (The partner in her first venture was the man who had been named as the co-respondent in Dr. Merrick's divorce suit.)  Kate soon became a fixture of city nightlife, as well as, in the stern eyes of legal authority, "the most inveterate lawbreaker in London"--all on account of her grave crime of selling liquor after hours.

The nature of London nightlife greatly changed after the Great War, as hard-pressed aristocrats sold their regal townhouses, which had become too expensive to maintain.  As Kerrie Holloway has put it, the venue for posh entertaining in the city shifted "from private ballrooms to public nightclubs."


For example, Grosvenor House, the splendid townhouse of the Dukes of Westminster, was sold and demolished in 1927.  It was replaced by a hotel (named, appropriately enough, the Grosvenor House Hotel).  Detective novelist E. R. Punshon referenced the decline of the London townhouses in his 1936 novel The Bath Mysteries, where we learn that police sergeant Bobby Owen's aristocratic uncle is saddled with a monstrous white elephant of a dilapidated city mansion.


While aristocrats fled their townhouses, the energetic "Ma Meyrick" (as she was known to society) stuck her finger into many a boozy pie.  Her most famous--or infamous in the eyes of the law--establishment was the "43," named for its location in the basement at 43 Gerrard Street, Soho.

In his novel Brideshead Revisited, Evelyn Waugh referenced both Kate Meyrick and 43, slightly disguised as "Ma Mayfield" and the "Old Hundredth."  Additionally, the detective novelist A. Fielding seems to have had Kate in mind when she devised the character of a notorious female nightclub proprietor, "Mrs. Finch," who is determined to have her daughter, Violet, marry into the aristocracy, in her mystery The Case of the Two Pearl Necklaces (1936), reviewed by me here. Quite unlike Ma Meyrick, however, Fielding's crass and mercenary Mrs. Finch is singularly charmless.


Kate's legal nemesis arose in the stern form of Sir William Joynson-Hicks, home secretary in the Conservative government of Prime Minister Stanley Baldwin, who vowed after taking office, the Daily Express reported, "to stamp out the evil of drinking after hours."

Under Great Britain's Defence of the Realm Act [DORA], passed in 1914, the government possessed, an authority has noted, "extraordinary powers of interference in public events and private lives." Originally DORA was justified "as a measure to keep munition workers out of the pubs during factory hours," but it was retained in place even after its original justification had vanished. By the end of 1928 the vigilant Sir William had prosecuted sixty-five clubs, including Kate Meyrick's.

Kate's legal troubles culminated in her being charged in 1928 with bribing a police sergeant to warn her when her premises were being surveilled.  For committing the crime of bribery (which for the remainder of her life she vociferously denied), Kate was sentenced in January 1929 to fifteen months hard labor at Holloway Prison.

After Kate's release from prison in 1930 (the year Dorothy L. Sayers's fictional mystery writer Harriet Vane, on trial for murder, was locked up in Holloway in the detective novel Strong Poison), the figuratively bloody but unbowed Kate, undeterred from her vocational ways, would serve two briefer stints of incarceration. Increasingly frail after her myriad legal battles and terms of imprisonment, Kate succumbed in an influenza pandemic in 1933.  At the time of her death she was only 57.

The censorious Joynson-Hicks had expected to find London's nightclubs "filled with whores" but instead discovered, to his consternation, that they were "crammed with 'society.'"

Kate herself was a "lady" who made a great deal of money as a nightclub owner (though she had very little of it left at her death).  This lucre she spent lavishly to educate her eight children at elite schools (Rodean and Harrow).

Up to Kate's death all the children, no matter how high they rose in social life, remained close to their notorious yet obviously devoted  mother.

As for Gordon, he never married in his short life as far as I know.  When he died under rather mysterious circumstances in 1943 he was living in Kensington, London.

So, just what happened on the night that Gordon Meyrick died?  I will have more on this, and his crime novel The Body on the Pavement, in my next blog post.


For more on the Meyricks, see this fascinating website maintained by a relation.
Posted by The Passing Tramp at 2:34 PM