The Ten Carrs of Christmas: Till Death Do Us Part (1944), by John Dickson Carr

The whole damned business was too close!  Too personal!  Too entwined with emotion!

"You're telling me," snarled Dick Markham, "or trying to tell me, it was Lesley again?  My Lesley?"
"Your Lesley.  Yes.  Slightly secondhand."
--Till Death Do Us Part (1944), John Dickson Carr

The village of Six Ashes in John Dickson Carr's Till Death Do Us Part is, I assume, named for ash trees, although I don't believe Carr ever mentions them in the novel.  (He does mention a public house called the Griffin and Ash-Tree.)  However, I think a half dozen ash trees would make a lovely Christmas gift indeed, especially in England, given the disastrous disease which has struck them there.

Till Death Do Us Part has always been well regarded, but the John Dickson Carr fandom community seems of late to have elevated this novel to a possible top tenner.  I haven't thought through my own Carr top ten systematically, but I think Part could well be a candidate, despite a few nitpicks I have, which have more to do with style than plot.

As Doug Greene has pointed out in his biography of Carr, the author's writing style began to shift in the Forties, after the publication of The Problem of the Wire Cage in 1939.  I'll quote Doug here:

Carr still saw fiction as removed from involvement with real life, and real life, he thought, was the purview of the naturalistic and realistic writers whom he despised.  But though he never came to like such writers and though he always saw novels as at their best incorporating the wonder of the New Arabian nights, his works were changing.  Instead of being detached from the events, his main characters will become desperately concerned with the outcome of the mystery, for their happiness, perhaps even their lives, are in the balance.

At the time I read it some twenty years ago, I hated The Problem of the Wire Cage, because I didn't want Carr's mysteries to be so full of this emotional tension, which I simply found tedious and wearing.  Carr was one of the most brilliant puzzle constructors in the biz, and when reading him I wanted to focus on a detailed investigation of one of his ingenious murder plots.  But I came to realize that the change in Carr's writing style was reflective of a change that was occurring broadly in mystery fiction at the time: the attempt to more greatly engage readers emotionally in the story.  No longer were these puzzles exclusively to be taken as dry academic exercises.  At this time many readers (and most critics) wanted something from their mysteries more than "mere puzzles." 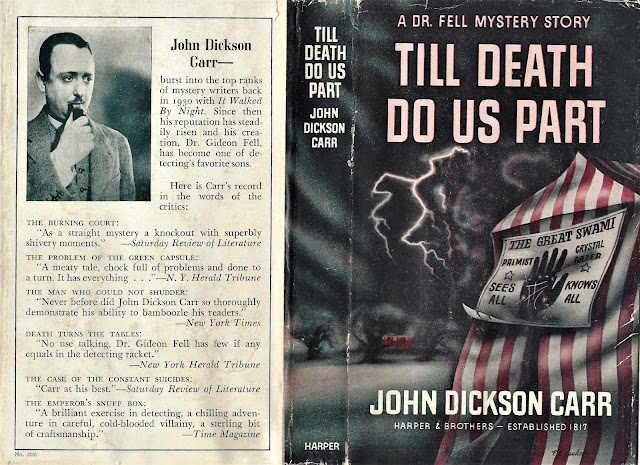 Hence in Till Death Do Us Part (1944), we have as a protagonist someone who soon gets enmeshed in a highly emotional murder drama in Six Ashes.  This individual is playwright Dick Markham, an author of popular psychological stage thrillers who when the novel opens has fallen madly in love with Lesley Grant, "a little known newcomer" to the village, as the jacket blurb states.

Right off the bat in the book we learn that Lesley is a beautiful brunette who looks "about eighteen years old, in contrast to the twenty-eight she admitted."  In other words, a typical Carr female love interest.  Why Carr's female love interests at this time so often look eighteen years old I can't tell you, but what I do know is that while they might be blonde or brunette or even black-haired and anywhere in actual age from twenty-five to forty or thereabouts, they will almost always look "barely legal."  And while they may be insipid or pouting or plucky, it seems that they typically will ultimately accede by novel's end to the dominant male, like most women in post-WW2, mid-century mysteries written by men (and, indeed, many written by women).

Ultimately Part is about the emotional anxiety through which women, curse 'em, put men, although here, just as in Carr's excellent He Who Whispers (1946), there's a sinister edge to our leading lady.  Just as you might call the female-centered mysteries of such authors as Mignon Eberhart and Mary Roberts Rinehart female anxiety mysteries, you could call Part a male anxiety mystery.  In so many mid-century female anxiety mysteries, the woman protagonist is presented with the same terrifying question--Could my husband/boyfriend be a murderer?--but in Part, it's the very male Dick Markham who finds himself agonizingly wondering whether his fiancee Lesley Grant might be a twisted murderess.

But, stop a bit, as a Carr character would say--let me backtrack a tad.  When the novel opens, Dick and Lesley have just come to an understanding (i.e., they've become engaged).  Now they have arrived late at a charity fete being held on the grounds of Ashe Hall by Lord and Lady Ashe.  Most of the attendees are off watching a cricket match, but there are a few people hanging about still, including Major Horace Price at the shooting gallery, Dr. Hugh Middleworth at the golf hazard, visiting Home Office pathologist Sir Harvey Gilman at the fortuneteller's tent, and banker William Earnshaw.  Lesley has her fortune told by Sir Harvey and seems distressed by what she years.  The next thing you know, she has accidentally fired a rifle shot straight at Sir Harvey's tent.  Did I say accidentally?...

Soon Sir Harvey, wounded by a rifle bullet, tells Dick, to his horror, that Lesley is a three time poisoning murderess!  And, worse yet, he says she's really forty-one years old!!!  (Despite this, Dick still refers to her as a "girl.")

Now, what's a man to do?  Well, this being a Carr novel, Dick vows to stand by her, even though Sir Harvey tells Dick that Lesley, given her history, surely is planning to murder him next.  After all, she murdered her last three husbands/fiances, didn't she?  (Was anyone else reminded of the clever Agatha Christie story "Accident?")

Again, this being a Carr novel, Sir Harvey divulges that the diabolical Lesley somehow committed her poisoning murders in locked rooms, in order to make them look like suicides.  Ironically, however, it is not Dick but Sir Harvey himself who is next found dead, in a locked room, from poison! Is this Lesley up to her alleged tricks again?  Or was it someone trying to make Lesley a scapegoat?  And could Lesley--sweet, lovely, prim yet intense Lesley--really have done all those horrible things?  (She herself says heavens, no!) 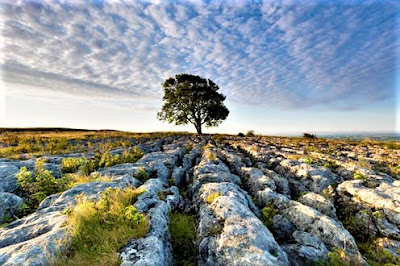 Till Death Do Us Part is a well-written, suspenseful story, with a fine locked room and some excellent clueing as to both the vexing how and who questions.  It's arguably Carr's best English village mystery, I would say, although it's oddly thin on women characters, given how important women characters usually are in this setting.

Often in Carr mysteries of this period, the main female characters are what I call the blonde one and the not-blonde one--young, attractive rivals for the attentions of the hero.  Here Cynthia's blonde rival is Cynthia Drew, the "nice," ostensibly no-nonsense local girl whom everyone thought Dick would marry, until bewitching Leslie appeared six months ago and swept poor Cynthia right off the matrimonial field.

The male principals all have spouses but weirdly these wives though referenced never appear.  The only other woman who speaks in the story is Mrs. Rackley, Leslie's comic housekeeper, though the postmistress, Laura Feathers, is mentioned.  (The latter makes a non-verbal appearance in the novel.)  There's also a minister, Reverend Arthur Goodflower (!), but he never appears.  Carr never did have much use for ecclesiastical types, important as they usually are in village mysteries.

The absent Arthur Goodflower excepted, however, the male characters are well portrayed; and to be fair to Carr, Agatha Christie was not that great at portraying characters of the opposite sex in her village mystery Murder Is Easy, reviewed by me here.  Actually, like Fay Seton in He Who Whispers (1946), Lesley is one of Carr's better love interest characters, I think.  Could she really be a murderess, like Dick is being told?  If not, what is the sinister secret which she's so obviously hiding?  I also liked Major Price, who resembles Carr's sleuth Colonel March and like March was obviously based on Carr's mystery writing friend Major Street, with "his thickset figure, his cropped sandy moustache, speckled round-jowled face and light blue eyes...."

Eventually Superintendent Hadley and Dr. Fell show up at Six Ashes. (Fell is needed to solve impossible murders, of course.)  Gargantuan Fell does his usual shtick, wheezing and exclaiming "Archons of Athens!" and making gnomic utterances that frustratingly trail off into ellipses...  It irritates me no end, which is why I tend to prefer Carr's Henry Merrivale's mysteries, though some people conversely find HM intolerable.  (I have a low mind, I suppose.)  We are told that Fell is a "scholar of international reputation" but to me he's mostly just a tiresome old gasbag.  (But then that can be true of scholars of international reputation, I suppose.)

To be sure, many of the Fell mysteries are sheer genius stories, however; and Part most definitely has a whole lot going for it.  It's one of the best examples of Carr emotional anxiety mysteries, along with He Who Whispers (1946), She Died a Lady (1943) and The Emperor's Snuff-box (1942).

Yet there's a little too much anxiety stoking for me in this story.  (See the book quote at the head of this piece.)  Carr's starting to use those irksome exclamatory triplets--"True! True! True!" and "Lesley! Lesley! Lesley!"  There was something about a triplet to Carr, it was like a magical incantation to induce stress in his readers; but it does nothing for me.  Other favorite Carr turns of speech make an appearance too:

Stop a bit!
Hoy!
For the love of Mike!

It just is not a Carr tale unless someone shouts Hoy!

Interestingly, there is a Goblin Wood referenced several times; and I wondered whether this is the same one which crops up in the splendid HM story "The House in Goblin Wood," or did Carr just forget he had used that name earlier?  Also the device of the phone call made to bring the protagonist to the scene of the crime in the early morning hours later pops up in The Dead Man's Knock (1958).  If you read a lot of a prolific mystery writers, even one as imaginative as Carr, you will find they occasionally repeat their devices.

Then there was this eye-roller (for me anyway) on the first page:

It was a scene which, four or five years later [the novel is set in 1938 or 1939-TPT], would come back to Dick Markham with a nostalgia like anguish.  A lush, green burning England; an England of white flannels and lazy afternoons; and England which, please God, we shall never lose for any nonsense about a better world.

Setting aside the white flannels and lazy afternoons for a moment, there was also an England of urban slums and rural squalor, of unemployment and destitution and disease and callous social complacency, of haves and decided have-nots, which is precisely why some people dreamed their hopeful dreams of a better world, however nonsensical those dreams may have seemed to John Dickson Carr.  But you needn't don Carr's English Rose-colored glasses to enjoy such a finely crafted Golden Age mystery as Till Death Do Us Part.
Posted by The Passing Tramp at 2:06 AM