Which authors do you think were most reviewed  in Todd Downing's mystery book review column in the 1930s (these reviews are collected in my Clues and Corpses: the Detective Fiction and Mystery Criticism of Todd Downing)? 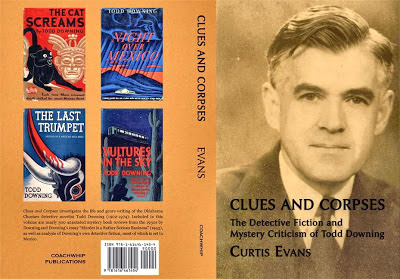 I think I will have to confine the prize to American and Canadian viewers, because of shipping expenses (unless you want to pay shipping; the book would still be free of course), but everyone can compete for the sheer honor of it of course!  Click my "about me" (upper right on this page) to get my email address on my about me page and put the label Downing Contest in the subject area.  Also give me at least your first name.

I'll have to close the contest after Sunday, because some people will be getting the book next week and they will be able to determine the correct ranking for themselves!

Here are the fifteen authors you have to rank in order from most reviewed to least reviewed (I've listed them alphabetically and included secondary pseudonyms):

How many of these authors had you heard of, by the way?  Or read?  Coming in behind this group above, by the way, to make the top 25 are Anthony Abbot, Hugh Austin, G.D.H. and Margaret Cole, J. S. Fletcher, Walter S. Masterman, Darwin Teilhet, Sir Basil Thomson, John V. Turner (aka Nicholas Brady and David Hume), S. S. Van Dine and Valentine Williams.

There are plenty of additional authors reviewed too, including the hard-boiled, like Dashiell Hammett, Jonathan Latimer and George Harmon Coxe, and psychological crime novelists like Elisabeth Sanxay Holding and Marie Belloc Lowndes.  Lots to love!
Posted by The Passing Tramp at 1:40 PM