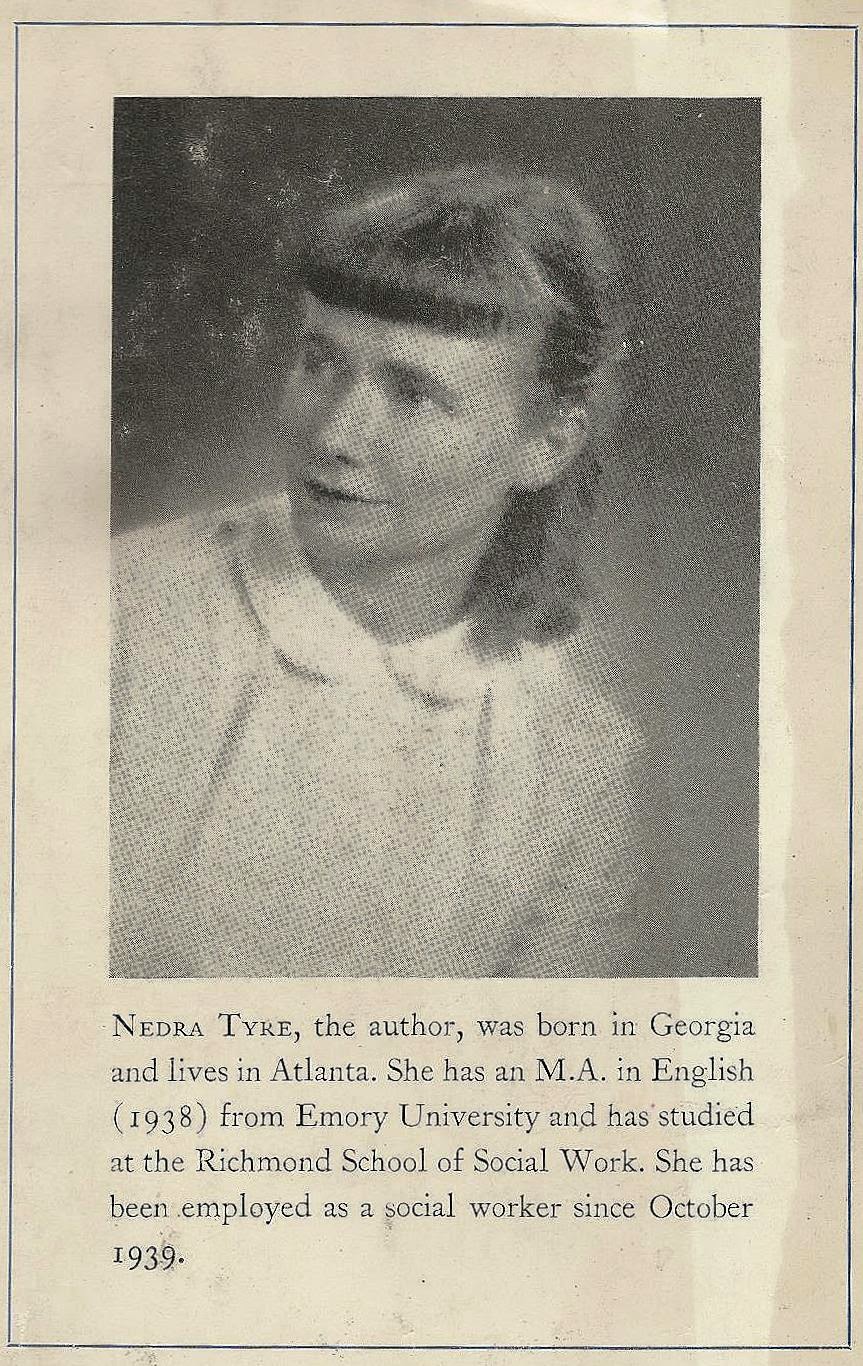 Native Georgian Nedra Tyre is one of the "domestic suspense" writers highlighted by Sarah Weinman in Troubled Daughters, Twisted Wives who was unfamiliar to me.  I quite liked the Tyre story that Weinman anthologized, and I also enjoyed the one included in John D. Macdonald's interesting late Fifties collection of crime stories by women, The Lethal Sex.

Tyre's first published book, Red Wine First (1947) is a collection of first person narratives based on her experiences as a social worker with clients in three southern states during the Second World War. This is an interesting book, having something of the quality of that American southern classic Let Us Now Praise Famous Men.  But it's not a novel, nor, strictly speaking, a collection of short stories. Rather, it's more a gathering of  fact-based dramatic monologues (this is the form as well of the two Tyre crime shorts I read).

Even though Tyre seems clearly to have had strong inclinations toward "straight," or "mainstream," writing, five years later she turned to the potentially lucrative crime novel market with the oddly titled (for a mystery) Mouse in Eternity. The title is derived from a poem by the foreign correspondent Paula Lecler: 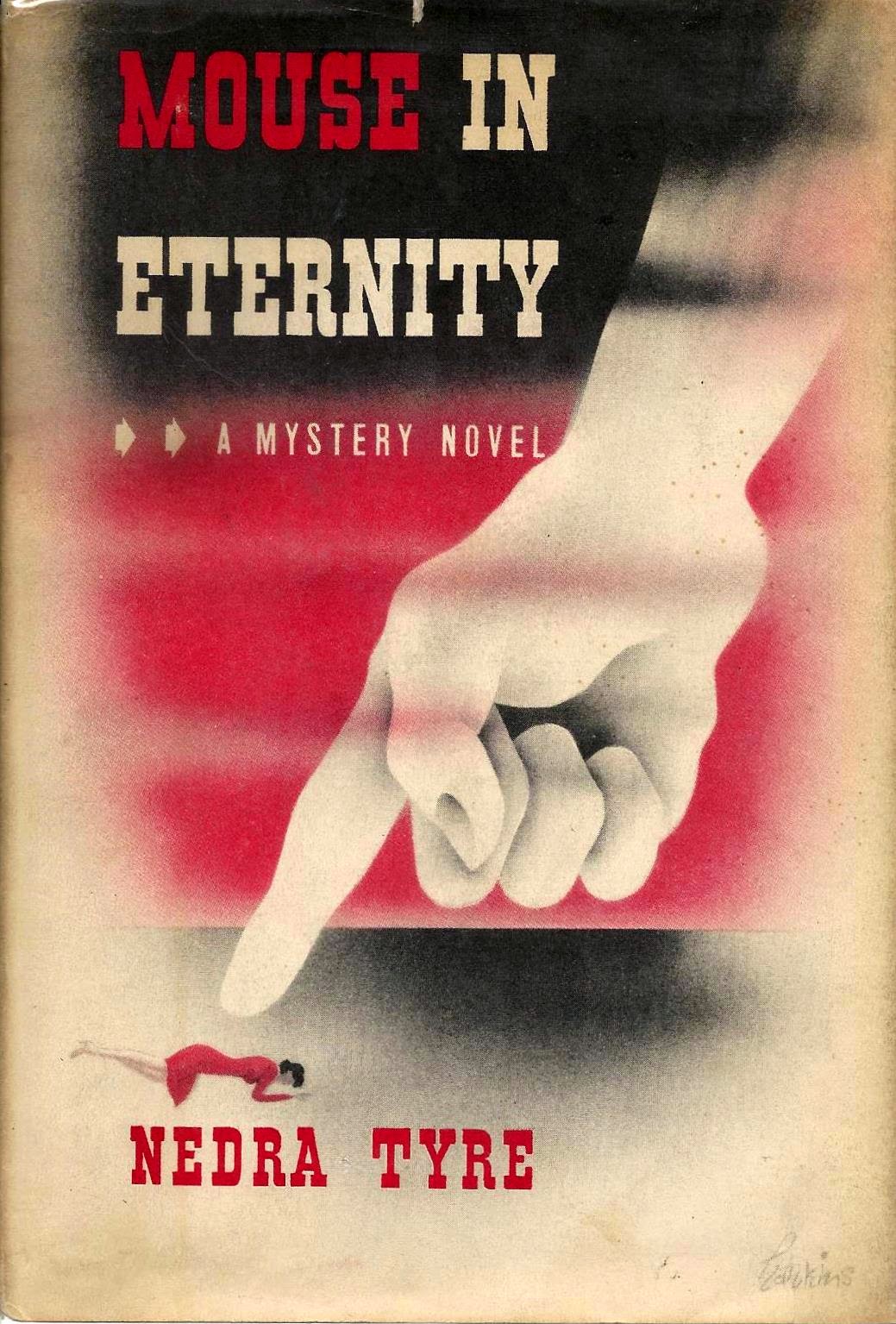 It is very, very curious
How one may either be
A cat that nibbles a moment
Or a mouse in eternity.

I loved these lines (especially "A cat that nibbles a moment/Or a mouse in eternity"), which suggest that Tyre had "artier" ambitions in mind than writing a "mere" puzzle (see Masters of the "Humdrum" Mystery for my discussion of the disparagement of strongly puzzle-oriented mysteries at this time).

The novel is set among Atlanta social workers--write what you know, as they say--and initially it reminded me rather of Christianna Brand's delightful workplace mystery, Death in High Heels (1941), wherein, as in Mouse, a hated boss is killed.  Unfortunately, I thought the pace in Mouse dragged and by the time I was halfway through the novel I had completely lost interest in the narrative.  There just was not, I felt, enough of a crime interest to sustain this book as a crime novel.

Interestingly, from the evidence of Mouse Tyre herself clearly had a genuine interest in crime literature, because throughout the novel her female social worker protagonist, Jane Wallace, and Wallace's intellectual male invalid friend discuss crime fiction with the true fan's passion.

At one point Jane names twenty crime writers whose books she has on her shelves (the list is forthcoming), much to the disgust of her friend Peg, who thinks crime writing is hopelessly lowbrow:

"Many intelligent people like murder stories," I said...."Some of the finest writing ever done has been in mysteries --even your precious Henry James tried them."

"The Turn of the Screw is not a murder story."

"It's placed among mysteries--how else would I know about it?"

I'm with the invalid friend!  How about you?

I'm afraid that I did not find Mouse in Eternity anywhere close to the level of the above classic crime novels, but I'll have another post about the observations on crime fiction in Mouse; for me they constitute the most interesting parts of the book.
Posted by The Passing Tramp at 3:35 PM