Crying All the Way to the Morgue: Two Little Rich Girls (1971), by Mignon Eberhart

Suddenly Diana let go of that big, now-lifeless body and leaned back on her heels.  "Why did I ever go out with him!"

"But they have found the gun."
"Sandy!  Where--!"
"You're not going to like it.  It was in the refrigerator....way back behind some celery and carrots and stuff...."

For this month's crime fiction of the year challenge--the year 1971--I turn to one of the twentieth century's old reliables of crime fiction, Mignon Eberhart. I have reviewed a couple of Eberharts here before, Man Missing and Unidentified Woman, so this title will make a trio. Obviously I like this writer or I wouldn't keep reading her, especially with the breathless romance she was prone to employ in her books.

Despite my occasional qualms with obtrusive romance in her mysteries I think Eberhart was one of the most able mystery suspensers in the history of genre and also quite important in that she played a major role in bringing emotions back into the detective novel at a time when theorists of detective fiction were arguing that emotions had no place in what they deemed, in contrast with the "thriller" and the Victorian sensation novel, a strictly ratiocinative and austere art form. Think not feel was the motto.

In the 1970s newspaper reviews of her books increasingly would refer to Eberhart's books, which always seemed to focus on the rich and privileged, as out-of-date and hackneyed. Some of this represented the tenor of the times, which were rather hostile to things deemed "traditional" in mystery, but it's only to be expected that a writer in her seventies who had been churning out a book of year for decades might lose some of her plotting oomph. Happily Two Little Rich Girls maintained the Eberhart brand standard and is in fact one of the better novels by her that I have read.

Two Little Rich Girls tells the story of the lovely Van Seidem sisters, Emmy and Diana, New York heiresses to a great family fortune, continuously referred to in the book as the "Van Seidem millions." On a visit to her older sister Emmy first finds a strange man in the house, recently shot rather unpleasantly dead.

But wait!  It's not a strange man, it's Gil Sangford, dilettante architect and man-about-town (there were still men-about-town in these years in Eberhart's world).  A handsome bachelor, Sangford had a habit of squiring at society functions various attractive rich women, including of late Diana, whose writer husband, Doug Ward, has been busy getting his first play produced on Broadway.

Diana insists that she didn't shoot Gil and has no idea who did, but after her initial hysteria she becomes rather jaded about the whole thing.  Diana had always been more of a Type A personality compared to her demure sister, and rather headstrong and self-centered at that (see quotation at top of blog).

Rounding out the list of major characters are Sandy Putnam, a young Van Seidem estate lawyer who has more than a passing interest in Emmy; Corrine Harris, the lead actress in Doug's play, who was engaged to Gil; Emmy's and Diana's charming, sponging stepfather, Justin; their imperious Aunt Medora; a bit player in Doug's play, a young actor named Thomas, who first appears sporting long hair and love beads, to help remind us that it's 1971 and not 1941; and Agnes, Emmy's outspoken housekeeper, a Van Seidem "family treasure" (though a peppery one).

Agnes brings to mind the other major indication that it's 1971 in Two Little Rich Girls: the servant problems rich people have. Diana complains about how hard it is to get help and even in the case of Emmy, it's pretty much a matter of anonymous cleaning ladies and old Agnes, who vexingly is always off visiting her niece. 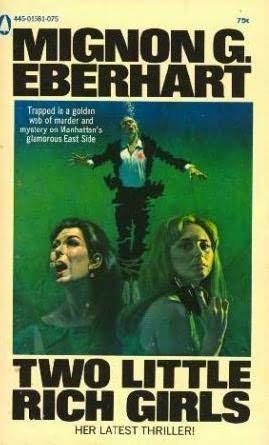 Eberhart paints her usual evocative picture of place, in this case chic New York locales for the most part, though Emmy in the middle of the novel does take a trip to the Riviera, the whole murder thing having proven rather stressful on the nerves (naturally there's another murder while she's on the Riviera).

I found it a relief that for once the heroine was not suspected of the murder--though Emmy's sister, Diana, definitely is a prime suspect, what with the fatal gun, which shows up in her refrigerator among the carrots and celery (see illustration above), being hers and having her fingerprints on it as well.

I also liked how Eberhart allows quite a bit of humor into this story. Justin and Aunt Medora are quite funny with their eccentric ways, as is even, at times, Diana.  Additionally, I thought Two Little Rich Girls was, unlike, some of the Eberharts  I have read, fairly and even creatively clued. Eberhart, the old virtuoso, may have been at this game for many, many years in 1971, but she still pulled off a good performance here, not unlike Agatha Christie with her Miss Marple mystery Nemesis, published the same year.  I guess they didn't call Eberhart "American's Agatha Christie" for nothing!
Posted by The Passing Tramp at 3:38 AM