I Saw it with My Own Two Eyes: Independent Witness (1963), by Henry Cecil

Henry Cecil Leon (1902-1976) was an English judge who in 1951 started, under the name Henry Cecil, a series of two dozen novels, very often humorous, dealing with foibles of English law.

How many of these legitimately can be called mysteries or crime novels, I don't know, though I suppose the case be made for calling them all crime novels, because some form of crime invariably seems to crop up in them, I believe.  The first book I read by Cecil, A Woman Named Anne (1967), seems to me indisputably a mystery, and a very good one, although the puzzle presented is not one of murder, but rather whether the male party to a divorce action was having it off with the dazzling Anne of the title.

Independent Witness, the Cecil novel under review here today, is more a suspense novel.  The story opens with a car driver who, after properly stopping at a "halt" to a crossroads in the town of Needham, by the pub the Blue Goose, begins crossing, only to collide with a speeding motorcyclist coming round a sharp bend. 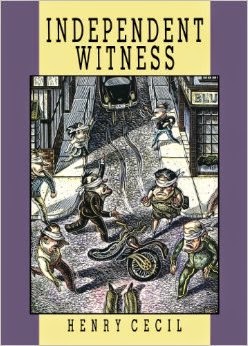 Although the motorcyclist has been injured--we later learn he makes a full recovery, though has no memory of the accident--the driver leaves the scene of the accident, much to the anger of the eight or so eyewitnesses who have gathered there. A few days later, Michael Barnes, an MP, turns himself in as the culpable driver, and, after appearing before the Magistrates' Court, is committed to trial (Michael explains, by the way, that he was in a hurry to get to his wife, who was having a difficult pregnancy and, he believed at the time he was driving, might be going imminently into labor; but he insists nevertheless that he did stop at the halt.)

Michael gets a brilliant attorney named Olliphant to mount his defense.  The two men have the following exchange about the subject of so-called independent witnesses:

"But why should the jury believe me and not the witnesses against me?  They're all independent.  They've nothing against me...."

"Nothing against you?" said Olliphant. "Haven't they?  First of all, you came off best.  You weren't hurt.  The motorcyclist was.  When an accident happens, it's human nature to take the part of the under-dog if you haven't seen what happened."

"But they'll say they did."

"Of course they'll say they did, but the chances are they didn't....None of them is going to tell deliberate lies, but they won't think they are lies....within seconds after your departure I bet most or all of those witnesses, talking about it together before the police arrived, created a picture for themselves of you dashing across the 'halt' line.  By the time the police arrived, you'd charged across the line without even slowing down."


Olliphant's task is to expose the independent witnesses as captives to their own preconceptions.  What follows is a tremendously interesting and entertaining courtroom fight, where we learn a good deal about the personal backgrounds--some humorous, some sad, many very odd indeed--of these men and women.

The funniest of the witnesses is a recurring character in Cecil's books, one Colonel Brain, who has a great enthusiasm for testifying in court.  Barzun and Taylor grumpily pronounced Colonel Brain "egregious" and in fact he is; but quite delightfully egregious, in my view, if you will permit paradox. In this novel the good colonel gives one of his classic performances:

"Vicinity?" queried the colonel.  "How big is that?"

"Were you anywhere near the Blue Goose?"

"Colonel Brain," said the chairman, "we are today concerned with an accident, not with the quality of the beer you drink."

"Really sir!" said the colonel, "I have sworn to tell the whole truth."

When I read Henry Cecil's fiction, I invariably find it delightful and instructive about some fascinating point of English law.  I think Cecil was one of the finest writers of twentieth-century English crime fiction, if we can call what he wrote all such.  Happily, I believe all his novels are currently available from the House of Stratus.
Posted by The Passing Tramp at 1:32 AM