Ah, those English Christmas season country house parties: so delightful and so deadly!

At the house party at Little Levington Hall in Christopher Bush's Dancing Death there is theft, along with three most unnatural deaths. Fortunately Ludovic Travers, a director of the publicity firm Durangos, Ltd. and an accomplished amateur detective, is on hand to investigate!

If you ever get to read a copy of Dancing Death--and I suspect you might, even though it now seems a hard book to find on the net, since, I have noticed, books I write about sometimes end up being republished by the British Library (more on this in a future blog post)--and you seriously want to try your hand at solving the mystery, read carefully!

Little Levington Hall is owned by Martin Braishe, inventor of a gas in which the War Office has taken a great interest, on account of its "amazingly lethal properties."  Braishe, who enjoys social life, is throwing a seasonal fancy-dress ball that will become, tragically, more of a fancy-death ball.

After the ball nine guests remain at Little Levington Hall (plus a goodly number of servants, some of whom play major roles in the story):

1. George Paradine, a medico in high places
2. George's formidable wife, Celia
3/4. The mercurial stage actress Mirabel Quest and her lofty sister Brenda Fewne, vicar's daughters ("Brenda seemed to have left the vicarial nest by crossing the lawn to the duke's castle; Mirabel, to have eloped from a back window with the frowsty leader of a pierrot troupe")
5. Brenda Fewne's husband, Denis, a novelist
6. Ludovic Travers, amiable, horn-rimmed gent and keen solver of mysteries
7. John Franklin, a friend of Ludo's and a detective with Durangos
8. Tommy Wildernesse, young man-about-town
9. Wyndham Challis, a stage producer dismissed as a "cheap little vulgarian" by Brenda

On the morning after the ball, many an unsettling thing is discovered: two guests are dead, some of the guests have been burgled and a cylinder of Braishe's incredibly lethal gas has gone missing.  Oh yes, and Little Levington Hall is snowbound and the phone lines are cut!  John Franklin goes to try to reach the police on foot, while Travers holds the fort and indulges his penchant for amateur detection. 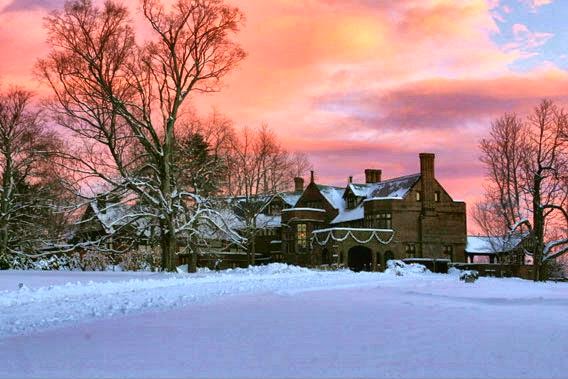 There's something of a plateau in the middle section of the novel, where I couldn't help thinking how John Dickson Carr would have generated more excitement from this classic material and that Ngaio Marsh would have done more with the characters (see her stab at a wintry country house murder, Death and the Dancing Footman, 1942).

However, there is a third death, and when the police finally arrive and Travers is able to do some longer-distance detection things move quickly to what is rather a smash climax. I was truly impressed when it became clear to me how dexterously Bush had constructed a bamboozling, cannily-clued plot.

Did I mention there's a floor plan (relevant), a ground plan (showing the fatal pagoda where one of the deaths takes place) and an illustration of the last scrawled words of one of the murder victims? Be still my mystery lover's heart!

You just may be seeing Dancing Death again in my Best Books Blogged in 2014, set to commence on the 26th.  Expect to see more about Christopher Bush--who was born on Christmas day 129 years ago, by the way--next month as well.

2011: Mystery in White, by Jefferson Farjeon (since gone on to greater things)
2012: Murder for Christmas, by Edith Howie
2013: Do Not Murder before Christmas, by Jack Iams
Posted by The Passing Tramp at 5:33 AM