"In books of course it is quite simple. I believe that private detectives of great ability abound. Very often, having been invited down for the week-end, before the murder occurs, they are handily on the spot before the police arrive.  They have friends in every walk of life, private laboratories at their disposal, and unlimited money.  I can only say I have never had the good fortune to meet one.  The private detectives that I have been called upon to deal with have been different."  Mr. Harrowing paused again, and added, "Quite different."
*****
"His first book is out in the autumn.  Murder, Mayhem and Mirth it's called.  I get two mentions in it.  'My old friend Albert Dodds agreed with me'--page ninety-two, and 'Sergeant Dodds expressed a contrary view'--page a hundred and four."

"I believe your'e making the whole thing up."

"Cross my heart, I'm not.  It'll be in the Gazette tomorrow."  Sergeant Dodds picked up three darts from the counter and flung one of them idly into the dart-board.  "One case I don't mind betting he leaves out though, that's the Binford Reservoir Case.  Between you and me, it wasn't really one of our best."

The "Binford Reservoir Case" is just what Blood and Judgment, Michael Gilbert's tenth crime novel, details.  A woman's body is found hidden away on the grounds of a London water reservoir and, after it's discovered she has been murdered, the great machinery of the Metropolitan Police is put in motion to solve the case.

An individual is arrested and charged with the crime, but that dogged young detective sergeant, Patrick Petrella, has his doubts that the case has been handled correctly by that showboating celebrity cop, Detective Superintendent Chris Kellaway.  What will Petrella do to see that a fair judgment is delivered? 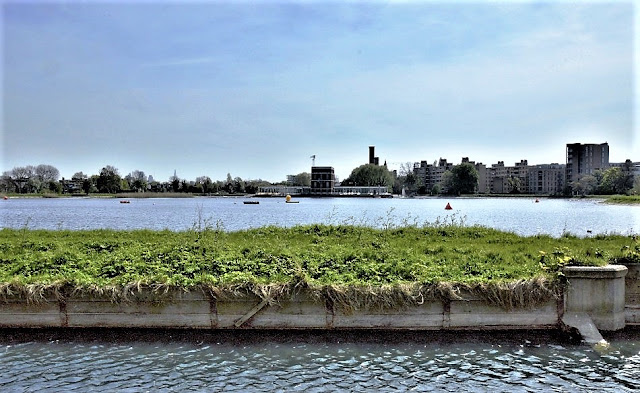 Michael Gilbert (1912-2006) produced several landmark works of English crime fiction, and surely Blood and Judgment is one of them.  It's not only an important English police procedural, following in the footsteps of the wonderful Henry Wade (see my book The Spectrum of English Murder), of whom Gilbert was a great admirer and whose wryly cynical tone Gilbert shared in his books, it's a nice little puzzle, at its heart the sort of thing you find in Golden Age detective fiction from the between-the-wars years. 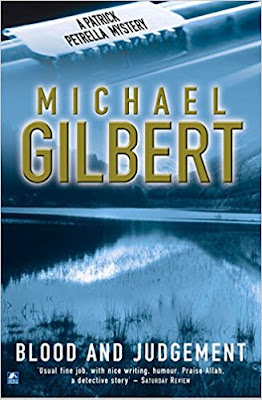 The milieu is realistic, the puzzle meticulously designed and the writing masterful. (The final paragraph is especially good and should stay with you in memory.)  Honestly, for what more could you ask in a police detective novel?

This may be my second favorite Gilbert, after Smallbone Deceased (1950), one of the finest examples of post-WW2 ratiocinative detective fiction and a book that postively "wowed" his brother and sister Detection Club members.  My Hodder reprint edition of Judgment (see above) says the book is a "near classic London police novel."  I have no idea why Hodder tempered their the praise with that "near."

Petrella appeared in only one other Gilbert novel, Roller-Coaster (1993), many years later, and the story is not as appealing to fans of classic detective fiction, I would opine.  However, Gilbert's appealing character also appeared in in numerous excellent short stories (fifty I believe), the majority collected, during Gilbert's lifetime, in Petrella at Q (1977) and Young Petrella (1988), but almost two dozen others appearing in additional, scattered volumes, some published posthumously.  One mega-volume of Petrella stories would be simply brilliant!
Posted by The Passing Tramp at 7:00 PM