Whenever I post something critical in some way of British author and critic Julian Symons, who died nearly three decades ago, I usually get met with some pushback to the effect of I shouldn't be criticizing Julian Symons, as it just isn't done apparently.  It would seem by doing so I am sowing disharmony in the vintage crime fiction community.

I find this ironic since Julian Symons himself fearlessly criticized anyone and anything he felt like criticizing and was so ensconced that it never seemed to harm him in any way.  Sure, there was an effort to boot him from the Crime Writers Association, but I gather it gained little traction, and perhaps there were some offended Rex Stout fans, outraged by his criticism of the author and his biographer, who didn't buy Symons' books (though they probably had never done so in the first place); but this was small beer to the esteemed president of the Detection Club and New York Times and London Times columnist.

What I regret is that some people seem to take my criticism of him personally on his behalf.  I will say again that it's not personal with me.  I like much of Symons' crime fiction and I find him rather a remarkable person indeed (far more so than I am).  Obviously he was a very important in the history of his crime fiction, both on account of his fiction writing and his highly personal criticism of the genre.

If you were brought to reading crime fiction on account of his genre study Bloody Murder and it led you on to read John Franklin Bardin and Patricia Highsmith and that Face on the Cutting-Room Floor guy (or better yet, Patrick Quentin), that's all well and good.  I wasn't, and I find it a flawed book that contributed greatly to a flawed narrative of the history of crime fiction.  However, I don't "blame" Symons for altering the course of crime fiction.  Change was inevitable and not altogether a bad thing either.

Incidentally (or not), I have read all of Symons' crime novels and I have enjoyed many of them.  My personal favorites are, in chronological order: 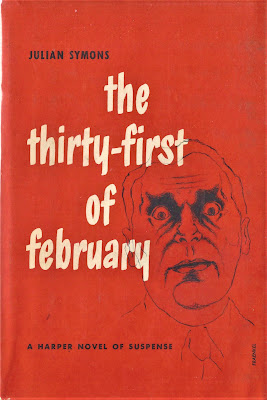 Bland Beginning 1949--Symons' essay in Innes-Crispin literary detective fiction, brilliantly drawing on his own family background--not flawless but well carried out and rather charming--reread several months ago and will review here soon

The Thirty-First of February 1950--Symons' first uber-gloomy crime novel, but influential in its deathly seriousness and grim rejection of classic puzzle plotting--influenced by Dostoyevsky, and there's nothing gloomier than a 19th century Russian novelist!

The Narrowing Circle 1954--chosen by Symons' philosophical opponent Jacques Barzun for his 100 Classics of Detection--bears a certain debt to Kenneth Fearing's The Big Clock, but one of S's best examples of a classic mid-century mystery

The Colour of Murder 1957--another classic Symons downer, a study of a downtrodden victim embroiled in a murder case. winner of the CWA gold dagger. 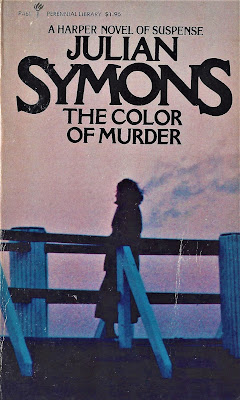 The Progress of a Crime 1960--a documentary style analysis of crime, trial and punishment, which acquainted the UK with the fact that they had police brutality in their country as well; won the MWA's Edgar

The Plain Man 1962--another classic-style mid-century mystery, on the order of Narrowing Circle

The End of Solomon Grundy 1964--another sardonic and ironic murder and trial case, I think better than Progress, but I suppose they didn't want to give him a second Edgar

The Man Who Killed Himself 1967--a dark but droll, twisty inverted mystery, in the manner of Francis Iles

The Blackheath Poisonings 1978--Symons' first venture into Victorian mystery, quite good but very gloomy--a classic Victorian family poisoning that likely draws some on his own family history 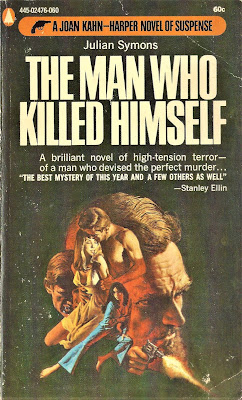 The Detling Secret 1982--another Victorian mystery, lighter than its predecessor but quite charming--Symons had charm when he chose to exert it

Death's Darkest Face 1990--Symons' venture into Barbara Vine territory and very good too--He died four years later and his last two books show a falling off in quality, but this is superb, one of his very best at age 78--sophisticated mystery at its best.

Something Like a Love Affair 1992--an impressive though slim coda, this one a moving venture into Ruth Rendell domestic morbid psychology

Only one of these books has even been reviewed here, a decade ago now, but I will try to rectify that in the future.

Posted by The Passing Tramp at 7:16 PM