In 1930 True Detective Mysteries published a column by American mystery writer Carolyn Wells, in which she considered the question, "Why Women Read Detective Stories."  This may seem an odd question today, when we read so many articles about how men do not read fiction at all anymore. I recall several years ago reading a post on Martin Edwards' blog where he pointed out that at his talks on mystery fiction his audiences were mostly women.  The comments on Martin's piece as I recollect seemed to be the effect that men didn't like reading fiction or, if they did, they gravitated to action and event. Women, on the other hand, liked the cerebral aspect to detective fiction.

This view often is applied backward in time as well, to the Golden Age itself, in explaining the popularity of the British Crime Queens, read, so the argument runs, more by women; yet it is in fact precisely the opposite of the then current wisdom of those days, which was men wrote and read detective fiction in greater numbers than women.

Recalling his days working in a bookshop, George Orwell, for example, wrote that while "women of all kinds and ages" read novels by such mainstream bestsellers as Ethel M. Dell, Warwick Deeping and Jeffrey Farnol, "men read either the novels it is possible to respect, or detective stories....[T]heir consumption of detective stories is terrific."

To the extent that women were seen as mystery readers in the 1920s it was more as readers of "thrillers," books that were less about cogitation than palpitation. The English shocker king Edgar Wallace was said to have kept more women up at night than any man in England.

It was only with the rise in the 1930s of the novel of manners mysteries associated most strongly today with the British Crime Queens Dorothy L. Sayers, Margery Allingham and Ngaio Marsh (and the concomitant decline of the "Humdrum" mysteries associated with male writers like Freeman Wills Crofts, J. J. Connington and John Rhode/Miles Burton--see my book Masters of the "Humdrum" Mystery) that observers began to associate women more with detective fiction per se (in the US women readers had long been associated with the mysteries of Mary Roberts Rinehart and the so-called feminine HIBK--Had I But Known--school, yet these books were not considered pure detective fiction but rather watered-down "mystery" bearing some considerable relationship to the thriller). 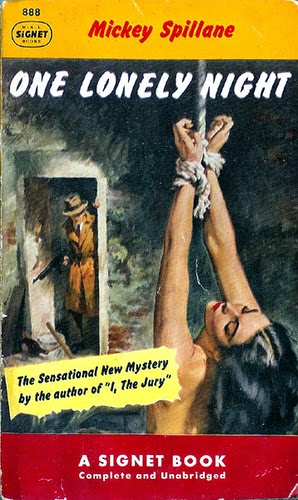 This perceived gender shake-up accelerated after the Second World War, with the paperback revolution and the great success of hard-boiled, noir and espionage novels, all of which were seen as being more read (in droves) by sensation-oriented men in search of the visceral thrills of violence and sex, the two qualities often emphasized on the paperback covers of these books.

The "traditional" detective novel now was being associated, in a way it had not actually been for much of the Golden Age, with women readers and writers (increasingly the "official" British Crime Queens Christie, Sayers, Marsh and Allingham, but also Patricia Wentworth, Georgette Heyer, Josephine Tey, Christianna Brand, Elizabeth Ferrars and others).

Often elements besides the detective plot were emphasized in discussions of these books, like "love interest" (romance rather than raunch), wit (genteel repartee rather than slangy wisecracks) and minute social observation (quaint villages rather than "mean streets"), qualities that, again, were seen as appealing more to a female than a male audience. (Although in paperback these books too sometimes received the sexed-up covers we associate with hard-boiled and noir "pulp.") Eventually the term "cozy" began being broadly applied to these books and their modern day incarnations, cementing the idea that these were more "women's mysteries," the visceral American tough stuff being the natural province of the male reader.

But before the Second World War (certainly before the mid-Thirties), the situation was, as discussed, much different, with its being assumed that it was the male sex was the one that more preferred genuinely ratiocinative detective fiction.

So when Carolyn Wells in 1930 wondered "Why Women Read Detective Stories" this was not an odd or quirky question. Women detective fiction readers often still were seen as something of a novelty.

Wells began her article by asserting that "woman's interest" in detective fiction, though of "comparatively recent growth," was real:

The list of detective story fans, continually appearing in newspapers, includes Presidents, Prime Ministers, Kings, Statesmen, Scientific giants, and celebrated men of all types, but never does a woman's name appear on those lists.  We are not informed that Mrs. Hoover or Queen Mary eagerly buy thrillers at the station news stands or order them from the booksellers by half dozens.  Yet recent statistics compiled by the editor of this magazine, tend to show that the interest in detective fiction is about evenly divided between the sexes. 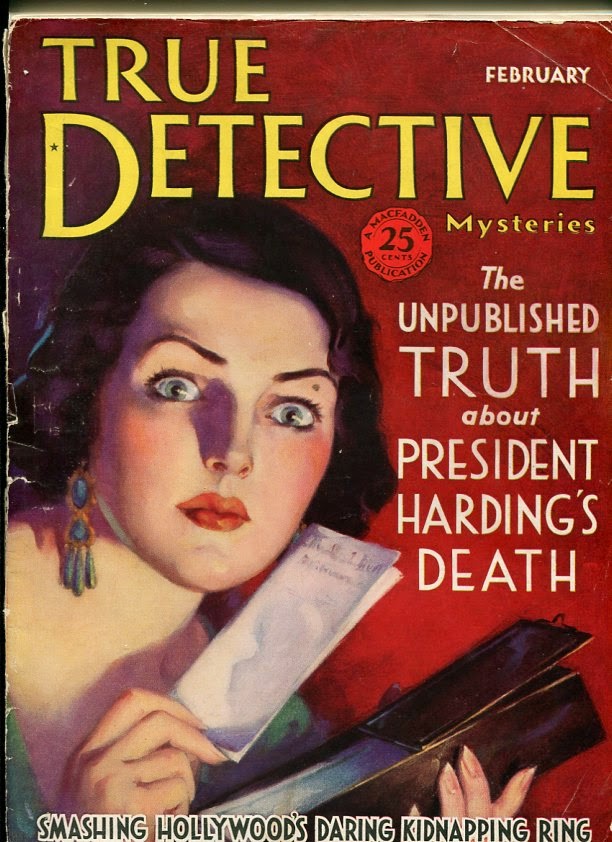 Of course True Detective Stories, founded in 1924, was a true crime magazine and, according to authority Leroy Panek, lent "toward sensation"; but it's interesting to see Wells challenging what was then conventional wisdom about detective fiction readership.

Wells believed that when, after the Great War, "the better class of writers...combined the horrors of murder with the intellectual interest of problem solving, the keen logical interest present, even if partially dormant in the feminine mind, awoke, and women began to see that detective stories had a lure of their own, as compelling as crossword puzzles or village gossip."

In the 1920s, according to Wells, women became desirous of emulating "all male pursuits," including reading detective fiction.  Woman "wanted to vote, wanted to cut her hair short, wanted to smoke, wanted to ride astride, wanted pajamas, and wanted the same untrammeled frankness of speech that man hitherto had hitherto monopolized.  These things she achieved, and it may be that detective stories fell into line."

Wells asserted to that the "feminine mind is often quicker and more direct than a man's mind....women are coming to realize more and more that detective stories appeal to the feminine mind that is willing to exercise its own peculiar gifts of logic and deduction."

Yet, Wells allowed, detective novels also offered women readers "scope for the working of their emotions....in a well-written detective story [a woman reader] finds someone to pity, someone to hate, someone to become enraged at, someone to love....she tingles with fear, she sighs with relief, she revels in the dangers and dilemmas, and her quick wits try to outrun the detective in his deductions and often do. 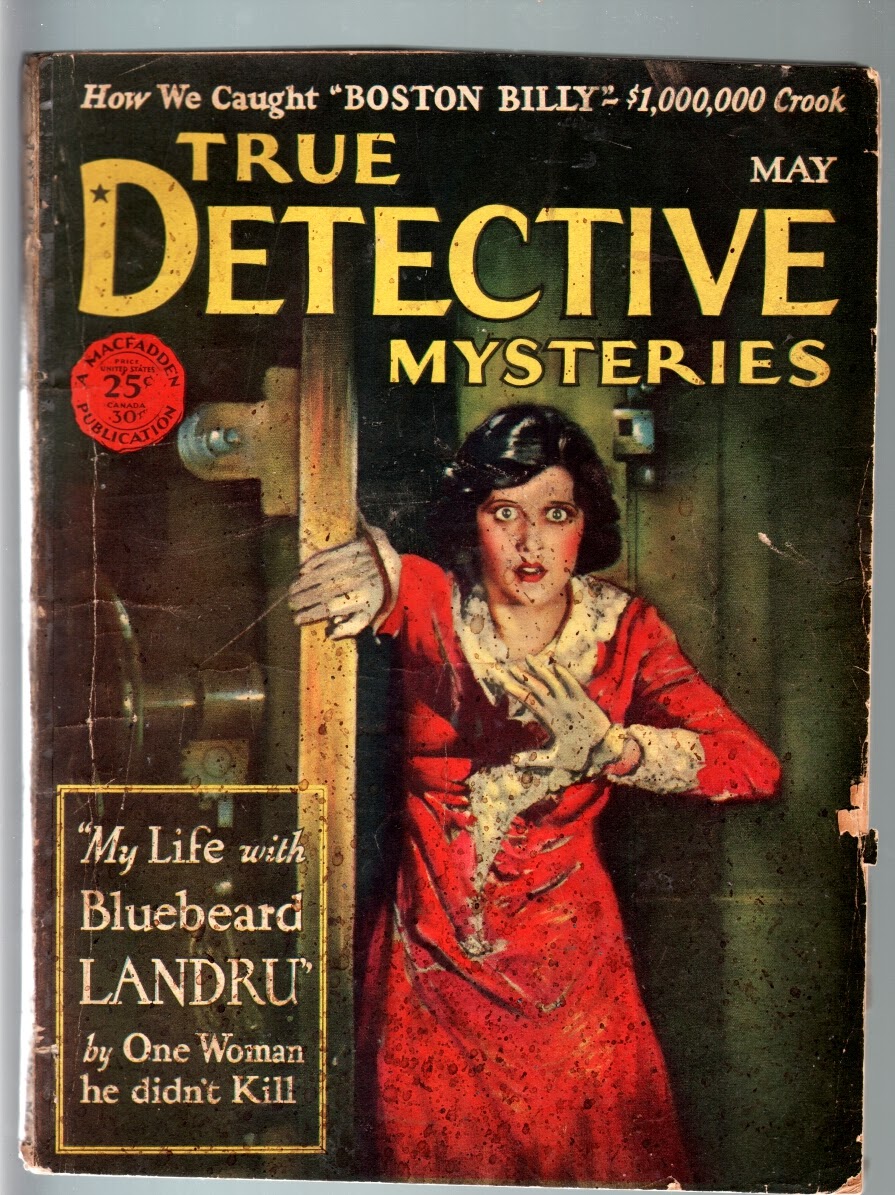 "As for the old love stories," Wells concluded, the woman reader "knew all seven of their plots and they held no surprises for her experienced interest....detective stories proved a new field, and women have fallen for it."

"Intellect is impartially distributed between the sexes," Wells significantly added, "and if in all ages man has achieved more lasting fame, raised to himself more enduring monuments, it is not because of a superior brain, but because of a multitude of other reasons and causes, which may not be enumerated here, however."

Perhaps the male readers of True Detective Mysteries weren't ready for such an enumeration!
Posted by The Passing Tramp at 1:25 PM