The final collection of Nero Wolfe novellas by Rex Stout (1886-1975), Death Times Three, appeared in 1985, a decade after Stout's death. It is an interesting collection, in that all the novellas included therein had previously appeared in two different versions. 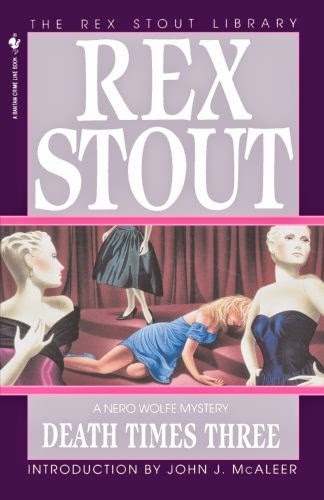 Bitter End (1940) was originally the Tecumseh Fox novel Bad for Business (1940), while Frame-Up for Murder (1958) was a rewrite of Murder Is No Joke, which appeared in the novella collection And Four to Go (1958), and Assault on a Brownstone (1959) was reworked as The Counterfeiter's Knife (1961), which later appeared in the novella collection Homicide Trinty as Counterfeit for Murder (1962).  That's quite a publication history!

Stout's biographer, John McAleer, who wrote the introduction to Death Times Three, makes good cases for each of the novellas. With Bitter End, what Nero Wolfe/Archie Goodwin fan wouldn't prefer a Wolfish adventure to a Foxy one, even if it is a novella versus a novel?

As for Frame-Up for Murder, McAleer argues it is clearly superior to Murder Is No Joke. While on the whole he seems to prefer Counterfeit for Murder to Assault on a Brownstone, he also thinks Brownstone has its unique virtues.  Certainly the first two novellas are musts for Wolfe/Goodwin fans and all for are vintage Stout from his best period.  I'll be saying more about them here soon.
Posted by The Passing Tramp at 5:21 AM