Stout Reads: See What Rex Read and How He Rated It 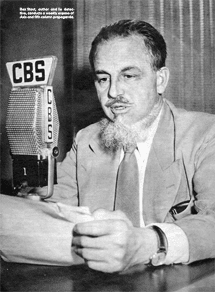 For only $300 apiece (heh) you can get a mystery novel owned--and presumably read--by Rex Stout. There are 22 such books listed on Abebooks by Between the Cover--Rare Books, Inc., all once stored in the carriage house of Stout's home.

Better yet, some of them were rated by him:

There are other books, but I didn't see others with ratings.  I have to say Stout's Ethel Lina White comment is hilarious, even though I quite like this author.  I don't believe her later books, from the 1940s, are that good, however.  Have you read any of these books?  Was Rex Stout right that George Harmon Coxe was the best bet?  I'll be talking more about Mr. Coxe soon.

Posted by The Passing Tramp at 6:51 PM