What Do "John Rhode" and William Faulkner Have in Common?

One answer (there are others, like that they both wrote mystery fiction; on Faulkner's efforts see below) is the artwork of Arthur Hawkins, Jr. (1903-1985). In his piece on this talented book jacket artist, Steven Heller glowingly writes that Hawkins' "highly stylized" designs are "most remarkably poster-like with a European accent." 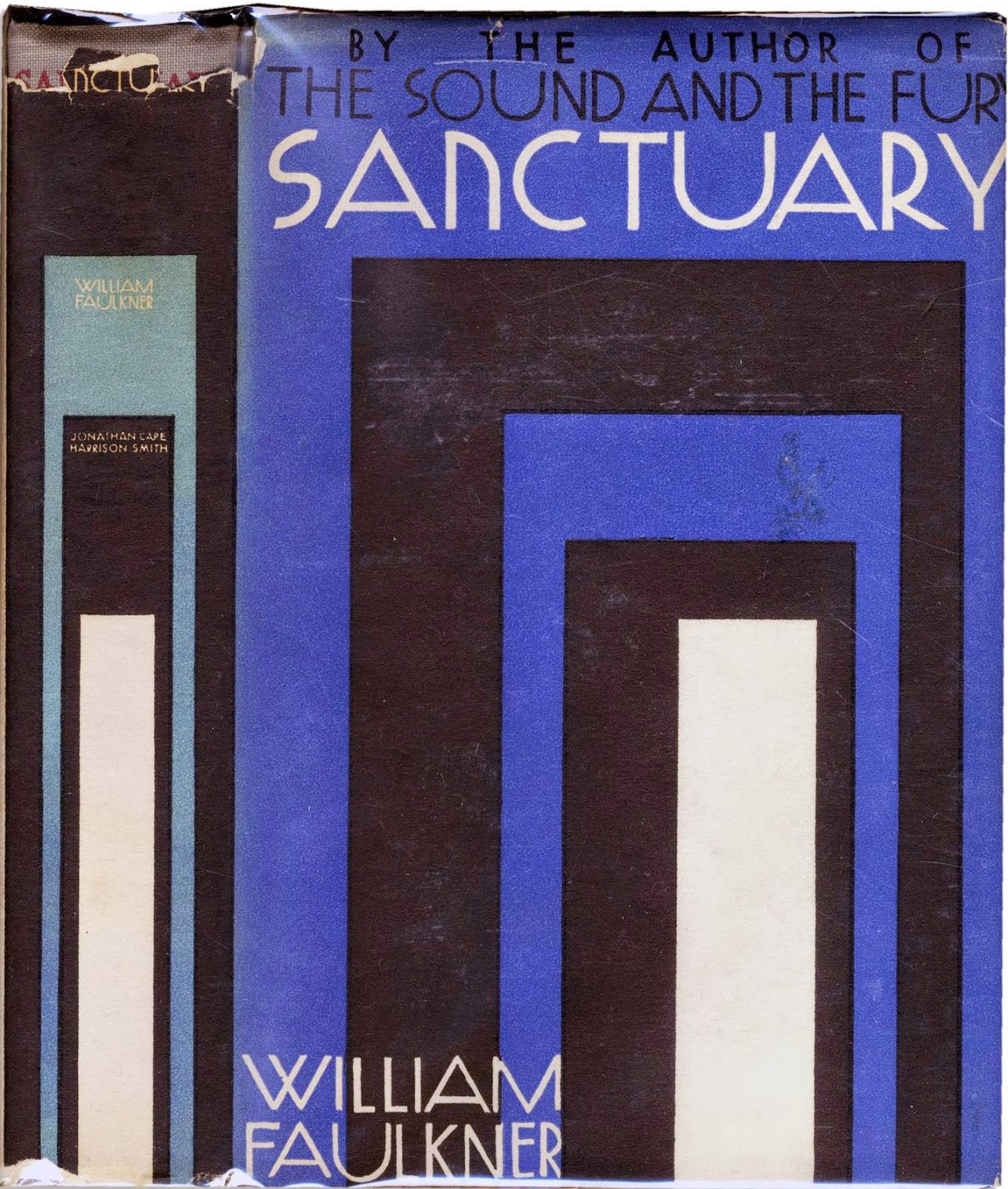 Hawkins did a number of jackets for mystery and crime novels, including James M. Cain's The Postman Always Rings Twice, and also for several of the early novels by William Faulkner, including Sanctuary (1931), itself a novel centering on horrific crime.

With its succession of stark diminishing black and blue rectangles leading the eye to a relieving patch of white, Hawkins' minimalist jacket design for Sanctuary strikingly visualizes the book's title.

The similarities between Hawkins' design for Sanctuary and his design for The Hanging Woman are, shall we say, arresting. 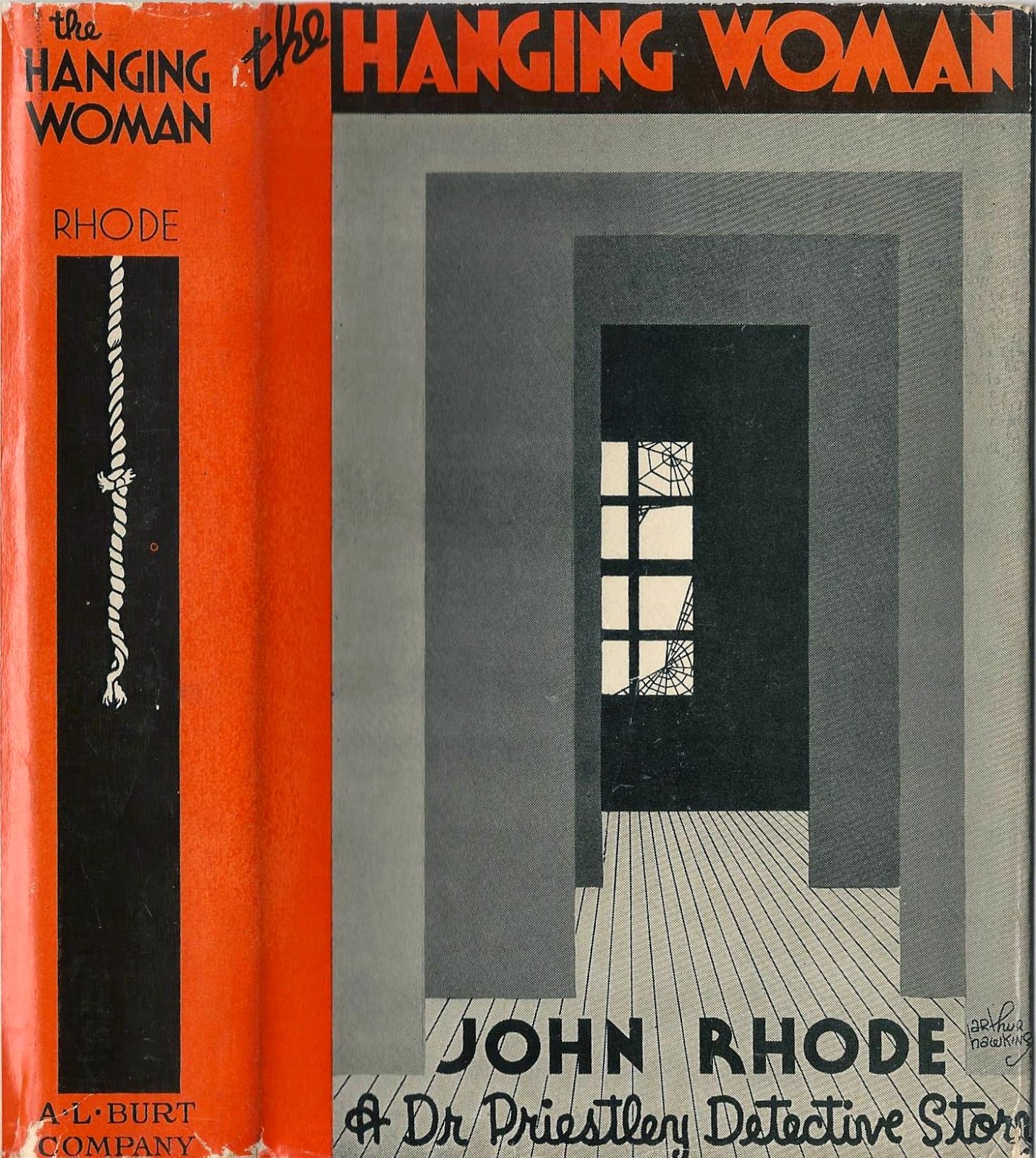 This "John Rhode" detective novel concerns a grisly discovery made in the basement of a reputedly haunted house: the body of a woman hanging from a beam.

For the American edition of the novel Hawkins changed the color scheme from Sanctuary's oppressive blue-black-white to a brighter red-grey-black-white.

By adding the details of a lined floor and a cobwebbed window and using alternating shades of grey to suggest the openings at the sides of the hall, Hawkins gives greater substance to the Rhode jacket. 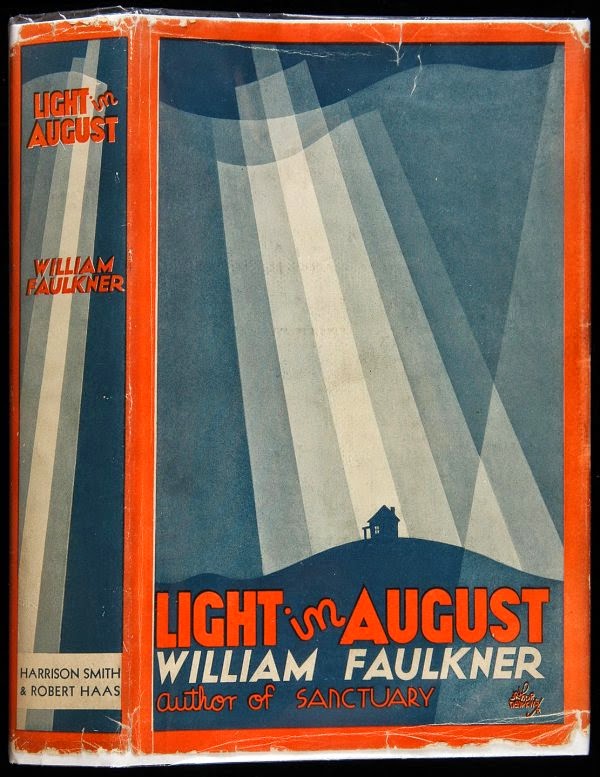 Yet it is still a remarkably spare, stylized design, to me evocative of a modern "house of horror" attraction or to the basement scene finale of the famously low-budget yet creative fright film The Blair Witch Project (1999).

One inevitably wonders what dread thing might be lurking in the darkness, just out of sight....

The spine of the Rhode jacket also has a similar rectangular motif to the Faulkner, yet it too is wonderfully embellished, with a length of dangling rope to suggest the awful presence of the hanging woman of the title.

The next year, 1932, Faulkner's Light in August was published.  Like Sanctuary, it has a Hawkins- designed jacket, one with a color palette that replicates that of The Hanging Woman.

More on John Street at The Passing Tramp:

More on William Faulkner at The Passing Tramp:

Review of Knight's Gambit (1949)
Faulkner vs. Wellman: The Ellery Queen's Mystery Magazine 1946 Showdown
Review of Intruder in the Dust (1949 film adaptation)
Posted by The Passing Tramp at 3:27 PM