By the Bookplate 1 The Telltale Thumb Mark: The Story of the Thief, the Book Plate and Dead Man Twice

Dead Man Twice (1930) for some reason is one of the easiest-to-find early Christopher Bush detective novels, even though most all of Bush's earlier novels were published in the US and UK.  I actually have copies of both the American and British first editions, but it is my copy of the British edition that carries the book plate of of Asa Guy and Rosamund Gurney, who today lie buried, far from England, in Michigan City, Indiana. (Rosamund Gurney died only four years after Dead Men Twice was published.)

The Gurney bookplate is an attractive one, depicting in the foreground a man and woman--Asa and Rosamund themselves?--at a Paris bookstall.  The man has a book in hand and in the background the awesome Notre-Dame Cathedral.

However, for the purposes of this blog, what is most interesting about the Gurney bookplate is the Gurneys themselves, or, more particularly, Asa Guy Gurney, who, it seems, once featured prominently in a noted American criminal case.


Back in 1894 $22,500 was found missing from a safe sent from the Bank of Commerce, New York to the Whitney National Bank, New Orleans.  This would be worth over $662,000 USD today, making this no petty theft, to say the least. David N. Carvalho, an expert in handwriting from New York, was called in to investigate the case.

On the American Express envelope containing the key of the safe, Carvalho discovered, under the lens of his microscope, "the faint impression of a man's right thumb in the wax of a broken seal."  He determined that the telltale thumb mark identically matched that of the agent of the American Express Company in New Orleans, who happened to be--you've probably guessed it--one Asa Guy Gurney. 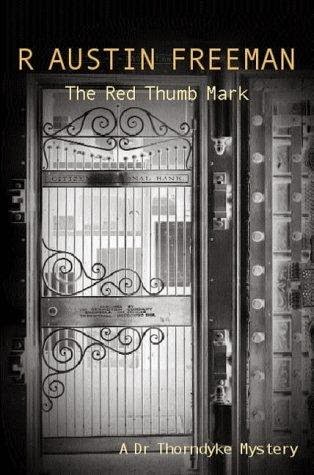 As explained by the Microscopical Journal the next year: "It has been shown in numberless instances that the thumb or finger impressions of no two persons are alike, and further, that the impressions stay the same from the cradle to the grave."  Yet "such evidence was too subtle for the rural jury which tried the case," noted a newspaper account.  The wily defendant was acquitted, though he later confessed to the theft, validating Carvalho's work.

Apparently in the leisure years he enjoyed after his crime, Asa Guy Gurney as a hobby perused crime fiction. Assuming the owner of Dead Man Twice was the same Asa Guy Gurney who pilfered the bank safe back in 1894, one can only say, how appropriate!

Mystery writer R. Austin Freeman later explored the matter of crime and thumb marks in his landmark scientific detective novel The Red Thumb Mark, while Arthur Conan Doyle is said to have publicly praised Carvalho's "nicety of reasoning" in the Gurney case.
Posted by The Passing Tramp at 11:47 AM