As I mentioned in my piece on Ruth Rendell's Simisola (1994), in a contemporary review of this twenty-year-old novel Publishers Weekly compared Rendell to great Victorian-era novelists, deeming Simisola "at times like a contemporary Middlemarch with a murder mystery at the heart of it."  I would argue that along with Road Rage (1997) and Harm Done (1999) Simisola forms a sort of Nineties English society trilogy, in which Rendell uses the mystery form to explore contemporary mores and conflicts.

Before Simisola Rendell's Inspector Wexford novels tended to be more strictly puzzle focused (offering some of the best puzzles in modern English mystery) or, if they did concentrate on broader social concerns, the results could be pretty mixed (see the feminism novel An Unkindness of Ravens),

After Harm Done, Rendell's Wexford mysteries declined in quality, I think, being neither as interestingly plotted nor integrating social issues as well.  Not in the Flesh (2007), for example, which I actually have rather an affection for, has a subplot about ritual female genital mutilation that simply does not link with the main story, which in itself is a strictly workmanlike mystery, punctuated by some interesting observations on aging and agriculture. 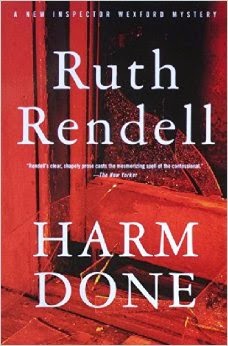 Harm Done, the third of this Nineties society trilogy, has three mystery problems, all of them linked by disappearances of children. First two teenage girls vanish, then suddenly reappear, not wanting to talk about what happened to them.

Meanwhile a pedophile has been released from prison and is being resettled at his daughter's home in a Kingsmarkham council estate, much to the objection of his neighbors.  When a third disappearance occurs--a toddler girl this time--many assume the "pedo" is responsible, even though, as Wexford points out, he was convicted for actions involving adolescent boys. Eventually there is a riot against the police station, in which a petrol bomb is thrown, killing a policeman.

Too late for the dead cop, Wexford solves the mystery of the vanished child and this solution eventually leads to a murder, which becomes the only formal murder problem in the novel.  This murder story pivots on the issue of spousal abuse, which in turn links with a continuing subplot about Wexford's less-preferred daughter, Sylvia, who has her own marital problems (non-violent) and is now working part-time at a shelter for abused women (happily by the end of the novel there's a bit of resolution, or at least a turning point, in the relationship between Wexford and Sylvia).

I was impressed with how Rendell wove this involved and lengthy tapestry together so efficiently. Fans strictly of the puzzle mystery likely will find all the social detail extraneous, but if they stick with it they do eventually get a classic murder problem with one very clever clue and even a twist ending.

On the whole I think I preferred the plot of Harm Done to that of Simsola, although Simisola probably has the more memorable characters.  Much of the characterization in Harm Done focuses glancingly on the lower class residents of a council estate, about whom Rendell writes unsentimentally (Minette Walters explored a somewhat similar subject three years later, in her novel Acid Row). Rendell has some good pointed satire here, though some may discern a scornful edge that may make them uncomfortable.

With the formal murder problem in the last part of the book, we find ourselves in upper, or upper middle-class, surroundings, familiar to the reader of the traditional British mystery; but, though Rendell has some interesting thoughts on domestic abuse, none of these characters are really developed with great depth.

On the other hand, Rendell peoples her novel with an impressively broad gallery of individuals and gives a compelling picture of a place and time.  It's a pleasure to lose oneself for a time in Rendell's Kingsmarkham, with the wise Wexford as our guide. Probably no one was doing the British manners mystery better in the 1990s than Ruth Rendell.

Incidentally, I call this Murdermarch III because the novel Road Rage came between Simisola and Harm Done.  I will have to go back and review that one someday!
Posted by The Passing Tramp at 12:06 PM