In my earlier post, I commented on the lack of American Golden Age mysteries dealing with serial murder on my short list of Golden Age serial killer novels.  Well, here's one that would certainly qualify, I think, The Bishop Murder Case, by the once highly popular S. S. Van Dine, creator of the once-famous Philo Vance (of Ogden Nash "needs a kick in the pance" fame).

In this one there are a series of bizarre murders seemingly linked by nursery rhymes (Christie was not the first to use nursery rhymes).  Bishop was a bestseller in the U. S. and there was a film version starring Basil Rathbone as Philo Vance (I believe he played some other fictional detective later in his career). 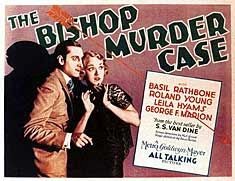 John Norris suggested The Grindle Nightmare (1935), by Q. Patrick (then collaborative authors Richard Wilson Webb and Mary Louise White Aswell), and that one certainly is a doozy!  Q. Patrick, who was also Patrick Quentin and Jonathan Stagge (well, Richard Webb was all of them; his writing partners varied) was often very good indeed and has been reviewed is his various incarnations several times on this blog. John has reviewed Grindle here.

Noah, TomCat and Yvette all mentioned Ellery Queen's Cat of Many Tails (1949), which comes outside the Golden Age proper, as usually defined, but Ellery Queen certainly is one of the great Golden Age authors and Cat is one of their great books. Indeed, the trio of Van Dine, Queen and Quentin/Patrick/Stagge is a most impressive one all round for the classic mystery fan.

Going back to England, our England, Moira mentioned Francis Beeding's excellent Death Walks in Eastrepps (1931).  As I recollect they have two or three others from the Thirties that could qualify as serial killer tales as well.  The two men behind Francis Beeding primarily produced spy novels, but they authored some excellent classic mysteries and thrillers as well.

Christian mentioned Neil Gordon's The Silent Murders (1929). This indeed is another serial killer story, but it was unfortunate at the time in using the same plot gimmick as John Rhode's The Murders in Praed Street, which preceded it by a year.  "Neil Gordon" is much netter known as the English satirical novelist A. G. Macdonell.

Christian also mentioned Phlip Macdonald's X v. Rex (1933), written under the pseudonym Martin Porlock, at a time when Macdonald was so prolific he needed a pseudonym or two.

As I recollect, this one was about a serial killer of police.  For some reason I recall liking this less than Murder Gone Mad, but I can't really remember why.... 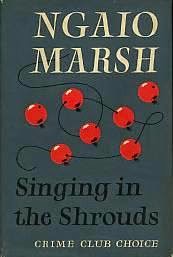 And what about Agatha Christie's bestselling novel, even more popular than The ABC Murders, And Then There Were None (1939)? I suppose this one doesn't qualify, because the setting and the time frame are too compressed, but in a way this punishes the killer for quite amazing efficiency.

So this nets us seven (eight?) more serial killer mysteries published by Golden Age authors between 1920 and 1960, to go with the original half-dozen tales I listed.

Keep them coming!  I'm sure there are others lurking out there in the dark, with additional intriguing forgotten mysteries....

Posted by The Passing Tramp at 9:23 PM