Books That Sell: The Recent Renaissance of Classic Mystery

I would love to see a far greater variety of GAD [Golden Age Detection] authors in print, but I also know that their sales would remain small.  But Christie and Sayers, along with Allingham and Josephine Tey (whom I forgot to include earlier), are still in print and selling.  Is there any wonder the publishers are interested in the women writers?  They actually sell.

The quotation above was part of a longer response I once received from an individual when I faulted, several years ago, bigger publishers for not reaching out, when reprinting classic mystery, beyond the "usual suspects": the Crime Queens Christie, Sayers, Allingham, Marsh. This individual's rejoinder--that the books of the Crime Queens, in contrast with books by any other classic mystery writers, "actually sell" was meant to suggest, I think, that my vision of a renaissance of renewed popularity for a broader array of Golden Age authors was rather a fond one.

Well, we have learned of late that among the mysteries that are actually selling are titles by John Bude and Jefferson Farjeon, authors long forgotten by all but the merest handful of collectors (three years ago, when I reviewed Farjeon's Mystery in White, since reprinted by the British Library, I was, to my knowledge, the first person on the internet to review a Jefferson Farjeon mystery). Mysteries by these authors now are selling very well, actually.  It seems that there really is a receptive audience for classic mysteries beyond those written by the Crime Queens.


The British Library will soon have out Antidote to Venom and The Hog's Back Mystery, two 1930s detective novels by Freeman Wills Crofts, subject of Chapter Three of my Masters of the "Humdrum" Mystery (2012). When I wrote Masters of the "Humdrum" Mystery I was fighting against the tide of what seemed a nearly unanimous critical opinion of long duration--Jacques Barzun and his friend Wendell Hertig Taylor being notable exceptions--to the effect that writers like Crofts were "Humdrums" hopelessly obsolete and unworthy of revival. Of course there were always collectors and classic mystery fans (some of them bloggers) who disagreed, but the people with the biggest megaphones--i.e., the biggest publishers--over the decades, like Julian Symons and P. D. James, tended to be quite dismissive of this group of writers (it was Symons who coined the term Humdrum, incidentally).*

*(For more on all this, see The Golden Age in Modern Memory) 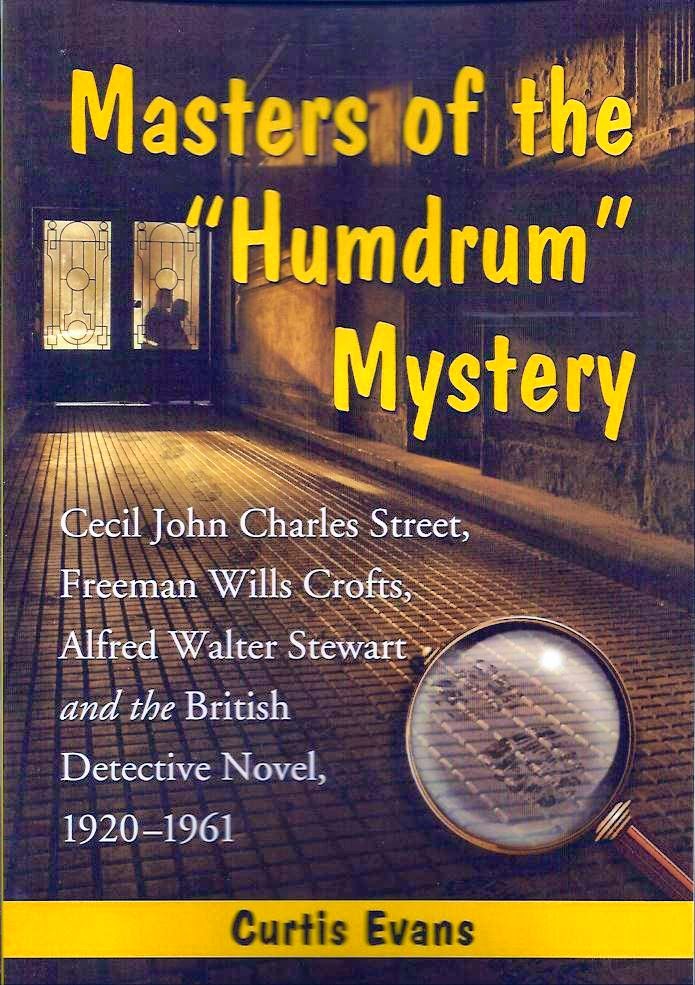 If there was strong resistance among publishers--intrepid micro-presses excepted--to reprinting the books of the Humdrums, you can imagine the resistance to publishing a book about the Humdrums!*

*(besides Crofts other once-prominent mystery writers who have been so classified include John Street and J. J. Connington, to whom chapters are devoted as well in Masters of the Humdrum Mystery; I have little doubt as well that Julian Symons would have classified John Bude as a Humdrum, as he did Henry Wade and G. D. H. and Margaret Cole, about whom I have a book coming out, The Spectrum of English Murder).

Throughout 2010 and 2011 I was unable to get a British publisher even to look at Masters.  It was rejected out-of-hand, simply on the grounds of the subject matter.  Who would want to read about these dead, forgotten authors, was what I kept hearing, essentially.  What seemed to be desired was another book about Christie or Sayers--and then of course there were Chandler and Hammett, and Jim Thompson and Patricia Highsmith.  You know, authors people actually want to read, the ones that actually sell.

It was a very frustrating time for me, because not only did I feel that the Humdrums were worthy of study for their own merit, I believed that they shed additional, important light on the world of Golden Age British mystery. I believed there was a tendency to dismiss the "mere puzzle" mystery and erase its significance in the history of the genre, as well as to treat the Crime Queens as necessarily representative of all other authors of the period on political and social matters. I felt confident that Masters made a contribution of note to the historiography of the mystery genre and that its arguments deserved a hearing.

Fortunately an American publisher, McFarland, agreed to actually look at the manuscript--and they liked it.  Masters made it into print in 2012.  Frankly I wish the book had gotten more attention (there was a very strong review from Jon L. Breen in Mystery Scene, for which I will always be honored, but it was passed over completely by the Edgars and other mystery groups). However, at least I have the classic satisfaction, nearly three years later, of being able to say, "I told you so" to those who had so little faith in the potential appeal of these authors.

It seems that classic mysteries by writers other than the Crime Queens--including even Humdrums--sell.  They actually sell.
Posted by The Passing Tramp at 2:50 PM