Ruth Rendell has authored two dozen Inspector Wexford detective novels over a nearly-half-century period stretching from 1964 (From Doon with Death) to 2013 (No Man's Nightingale), Half of these books appeared between 1964 to 1983, when Wexford detective novels predominated in her fictional output.  In those same years of the earlier Wexfords, Rendell authored ten non-Wexfords. Since 1983, however, she has written 12 Wexfords, 18 non-Wexford psychological thrillers (including Dark Corners, to be published later this year) and 14 mysteries under her "Barbara Vine" pseudonym, launched in 1986.

Wexford, in other words, became less and less significant in her output, at least in terms of quantity. I would argue that her later eighties Wexford output is inferior in quality as well. In the period when she produced the psychological thrillers The Killing Doll, the Tree of Hands and Live Flesh and the Vine mysteries A Dark-Adapted Eye, A Fatal Inversion and The House of Stairs, the Wexford novels An Unkindness of Ravens (1985) and The Veiled One (1988) rather pale in comparison. I have previously detailed some of my issues with Raven; I recently looked again at The Veiled One and thought it had much too much of both Wexford's chief assistant, Mike Burden, and his daughter Sheila, who in this one has become a no nukes activist (anti-nuclear activism also comes up, as I recollect, in the contemporaneous PD James novel Devices and Desires). 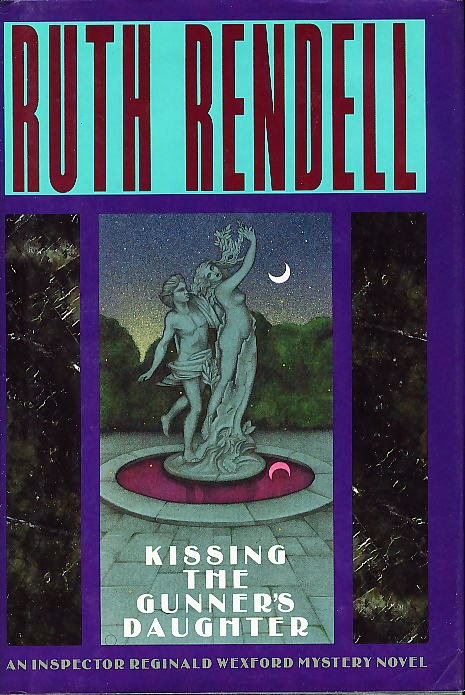 Happily Rendell's Wexford bounded back with a 1991 novel, Kissing the Gunner's Daughter. While in this one Rendell eschews looking at wider social trends, like she would in what I call her "Murdermarch Trilogy" from the rest of the decade (Simisola, Road Rage and Harm Done), it's nevertheless a fine book, boasting an intricate, clued puzzle and reflecting the author's intensified interest in criminal psychology.

Kissing the Gunner's Daughter opens with an armed robbery by two men at a Kingsmarkham bank that results in the death of a somewhat dim, gung-ho cop, Detective Sergeant Martin. Rendell's opening chapter detailing the bank robbery and Martin's death is more like a modern crime novel than a classic mystery cozy: "Martin fell.  He did not double up, but sank to the floor as his knees buckled under him. Blood came from his mouth...."

More bloodletting follows six months later, in Chapter Three, when there is a massacre at Tancred House, the stately home of renowned anthropologist Davina Flory. Here Rendell only describes the crime scene after the fact, as viewed by the police; but it's a very bloody crime scene indeed, with Davina Flory, her third husband and her daughter from her first marriage all shot to death and her seventeen-year-old granddaughter, Daisy, bleeding profusely from a wound in the shoulder.

Daisy survives and give the police a picture of the massacre, which at first appears to have been a robbery by two men, gone very wrong.  But of course it turns out to be much more complicated than that.... 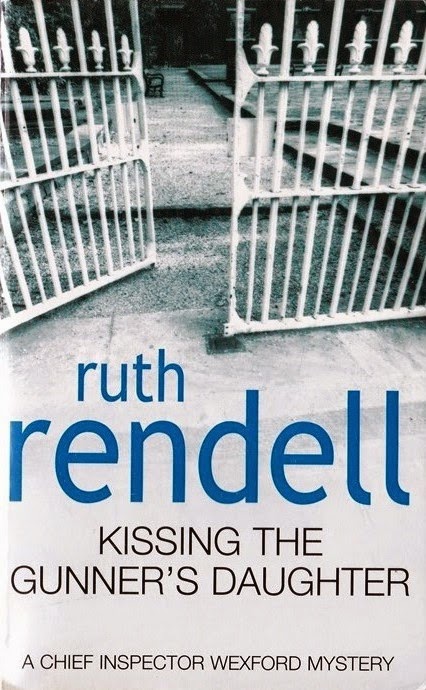 Kissing the Gunner's Daughter seems a bit off the beaten track for a Wexford novel. The emphasis in the beginning on brutal violence reminded me rather of Rendell's non-Wexford novels A Judgment in Stone (1977) and Live Flesh (1985) (in truth, the opening chapter of Daughter is very similar to that of Live Flesh). The emphasis on psychological states shows the influence of her contemporaneous Rendell thrillers and Vine mysteries, I think.  Yet the plot is a good, complex detective novel plot in the classic Wexford manner, with some clever clueing (I even found myself wishing for a frontis map depicting Tancred House and its grounds).

At about 110,000 words, I judge, Daughter is longer than the early Wexfords, but not as long as future Wexfords would become (Harm Done is, I think, over 150,000 words).  In her review of Daughter, blurbed on the back of the recent British paperback edition, Kate Saunders declares that "as usual, there is not one superfluous word."  For myself, I could have survived without some of the copious nature scenery descriptions, but on the whole I think Daughter stands with Rendell's best Wexfords and is a fine example of the post-Golden Age English detective novel.

I should note that in this one Rendell introduces Sergeant Barry Vine, an obvious play on her recently-minted pseudonym.  She also has characters named Anne Lennox and Andy Griffin, names quite close to those of famous people from the entertainment world. Several women cops are introduced here as well, I believe, and they play greater roles in the Wexford saga over the 1990s and beyond.

This time around Wexford is having a go-round with his actress daughter Sheila over her new boyfriend, a grotesquely arrogant critically-esteemed novelist, Augustus Carey, whose work has been short-listed for the Booker prize ("He had already written at least one work of fiction without characters," Rendell wryly informs us).  If Rendell was having some fun with her creation of characters named Barry Vine, Anne Lennox and Andy Griffin, here she obviously is working off some irritation over dismissive attitudes to crime fiction in the literary world (we don't discover what Carey thinks of crime fiction, but we learn he is dismissive of horror writer M. R. James, a favorite of Rendell's--and mine). 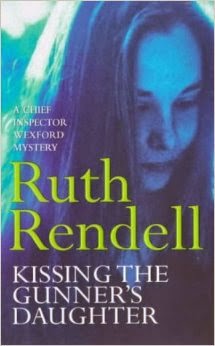 Interestingly, Rendell is critical not only of Augustus Carey, but of dead Davina Flory herself.  Wexford reads some of her work and decides

that he didn't much like Davina.  She was a high-toned snob, both social and intellectual; she was bossy, she thought herself superior to most people; she was unkind to her daughter and feudal to her servants.  Although avowedly left-wing, she referred not to a "working class" but to a "lower class. Her books revealed her as that always suspect creature, the rich socialist.

I found this interesting criticism, coming from Rendell, herself a rich socialist.  But that's one of the fun things about reading Ruth Rendell--you can't pigeonhole the author or her work.
Posted by The Passing Tramp at 1:06 PM