Film scholars seem not to rate the movie White Woman (based on the play Hangman's Whip) too highly, dismissing it as a lurid "jungle melodrama."  Well, yes, but where in the world would we thriller fans be without melodrama?  I think this film is grand. 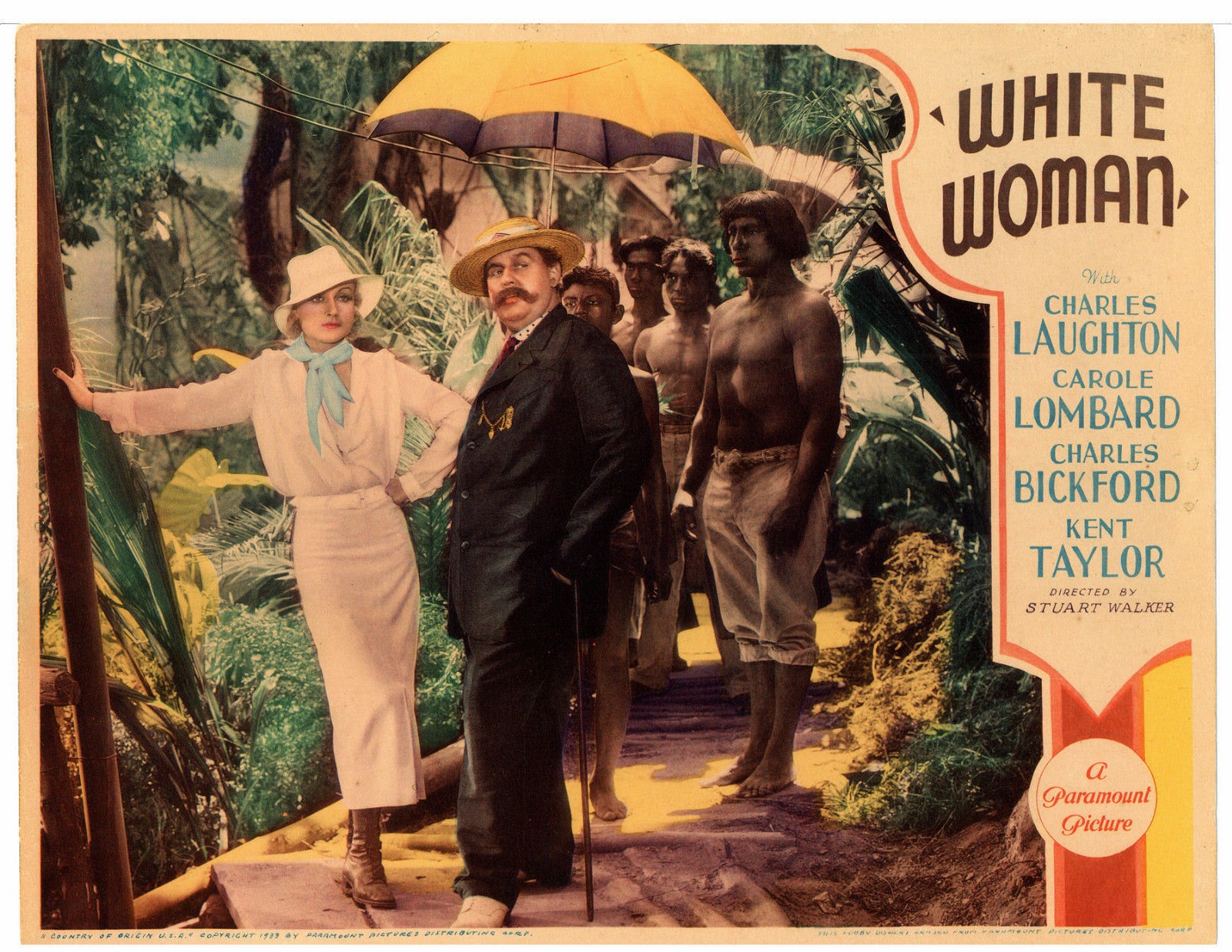 Beautiful Judith Denning (Carole Lombard) is shunned by the proper white community in Malaya on account of marital scandal: her recently deceased husband, it is said, committed suicide, believing that she was carrying on with a handsome Australian.  Now impoverished, she has been forced to take employment singing in a club to mixed race audiences, which only makes local society condemn her all the more. Threatened with deportation on account of her "scandalous" behavior, Judith marries vulgar, nouveau riche Horace Prin (Charles Laughton), the "King of the River," the greatest rubber planter in Malaya, and travels upriver with him to the grand converted boat-house where he holds court. 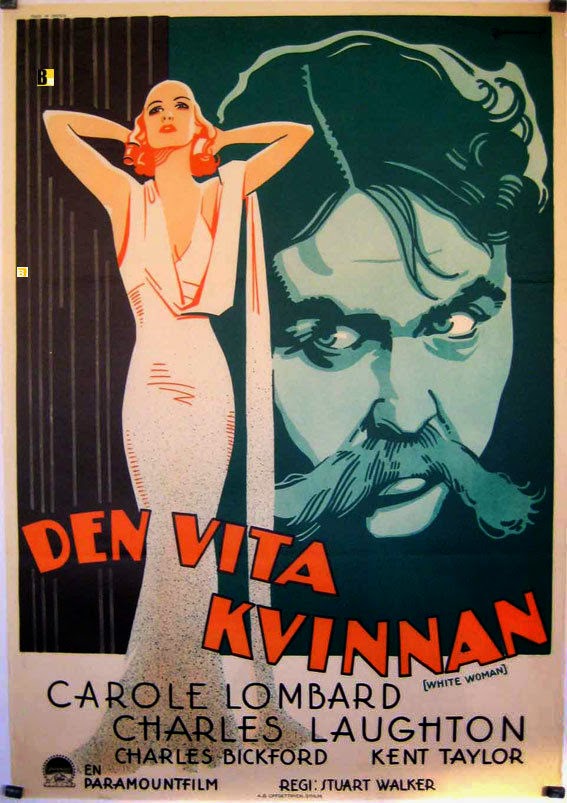 Sadly for Judith, soon the bloom is off this abrupt marriage of convenience (it would have to be; this is only a one hour and nine minute film).  Judith finds that Horace Prin ("Prin," everyone calls him) is an eccentric and sadistic egomaniac with an obsessive need to control everyone around him, including the native workers, his plantation overseers and, of course, his new bride. When Prin notices that his handsome and sensitive overseer, David von Elst (Kent Taylor), has caught Judith's eye, he sends David packing to run a distant plantation, where the previous overseer has just died under highly suspicious circumstances.  Prin replaces David with a brash American--is there any other kind in these films--named Ballister (Charles Bickford).

But the natives are restless and even the scenery-devouring Prin may bite off more than he can chew this time! 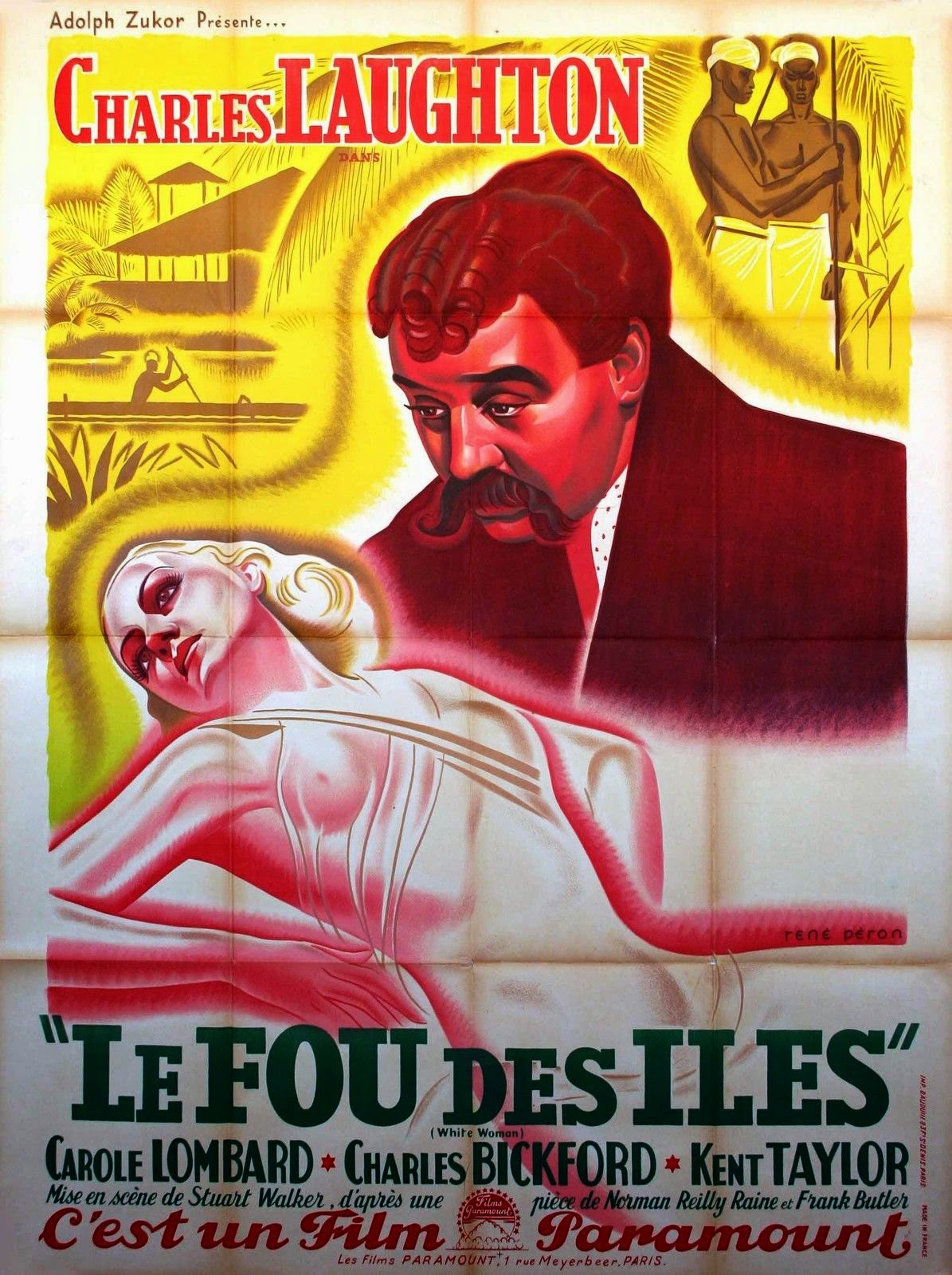 What an enjoyable, atmospheric slice of tropical melodrama I found this film! Though of course Lombard found her forte a few years later in screwball comedy, she is quite good in White Woman, reminding me rather of Gloria Stuart, who the year before starred with Charles Laughton (along with Boris Karloff, Melvyn Douglas and Raymond Massey) in one of the great Thirties terror melodramas, The Old Dark House.  Kent Taylor is your classic rather willowy early-Thirties male romantic interest (complete with pencil-thin mustache), but in fact he plays his character, who today we would say is suffering from PTSD, rather well. The fine character actor Charles Bickford, a three-time Oscar nominee, is great as the rough American and pivotal to the film's closing scenes.

Yet, not surprisingly, it most definitely is Charles Laughton who dominates the film, and he is superb in this colorful "fiend" role.  His theatrical Horace Prin is of a piece with his more famous Thirties villains like Dr. Moreau, Nero, Henry VIII, Javert and Captain Bligh. I found the grim final scene of the film, which Laughton plays to the hilt, riveting. Some will call it the purest ham, but I enjoyed every morsel of it.  Incidentally, I was a bit reminded of Laurence Kirk's suspense novel The Farm at Paranao (1935), very favorably reviewed by me here.

Stay tuned for a review of another interesting, if less successful in my view, Carole Lombard thriller from 1933, Supernatural.